Marvel Comics releases X-Force #12 on September 9. Writer Benjamin Percy, artist Bazaldua, colorist Guru-eFX, and letterer VC’s Joe Caramagna deal with the aftermath of the attack on Krakoa, the fate of Kid Omega, and the plans of Mikhail Rasputin (older brother of Colossus and Magik). This issue also bears the “Path to X of Swords” moniker.

In this issue, Percy reveals that Mikhail is working with the anti-mutant group Xeno. He offers them the Sword of Cerebro, which readers learn contains all of Krakoa’s intelligence, although how it is accessed remains a mystery. Xeno is also in the process of creating an army of super-soldiers sliced and diced from mutant DNA, and now Mikhail offers them Kid Omega’s body to experiment on.

Pursuing leads on the missing sword, Beast and Sage discover a message carved in the ground by the dying Kid Omega. The message contains one word: MIKHAIL. Beast proceeds to round up all mutants with either national or family ties to Mikhail, including Omega Red (whose appearance in this issue with Wolverine doesn’t quite jive with Percy’s use of both characters in the Wolverine series, but oh well) and Colossus (although not Magik).

Beast, in yet another show of shadiness in the character’s portrayal in the last few decades, makes a spectacle of Colossus’s arrest, putting him in handcuffs and gathering a crowd of mutants in Krakoa to watch him come through the gate, much to Domino and Wolverine’s consternation (the latter punches Beast). Nevertheless, Wolverine seeks Jean Grey’s help to psychically determine what, if anything, Colossus and Omega Red might know.

It appears that X of Swords is going to be an event fought on many fronts. In Cable, the Sword of Galador has involved a bunch of sci-fi space knights, while in Excalibur, Brian Braddock has acquired the mystical Sword of Might. X-Force has now added the Sword of Cerebro to the mix. I’m not sure that any of us are prepared for how big and multi-faceted this event is going to be!

Bazaldua’s art in this issue is great! The faces in this issue are done really well, particularly when they are capturing the sinister or intimidating nature of the character. When he is looking down at a dying Quentin Quire, Bazaldua provides the impression of a robust and confident killer.

Likewise, Bazaldua and Guru-eFX create a beautiful panel showing Mikhail and the leader of Xeno staring each other down.

This panel captures the menace of both men. Both are stone-cold killers with evil behind their eyes and yet a cool respect for the other’s power. One gets the impression of two snakes waiting to strike the other (speaking of snakes, doesn’t the Xeno leader kind of look like Cobra Commander here?). The shading of the colors on the Xeno leader’s mask and the shadows around his eyes add to this effect.

Finally, Beast just can’t help but continue being terrible as a character, and his assholery is on full display, which the art team portrays well when depicting his smug, arrogant face. 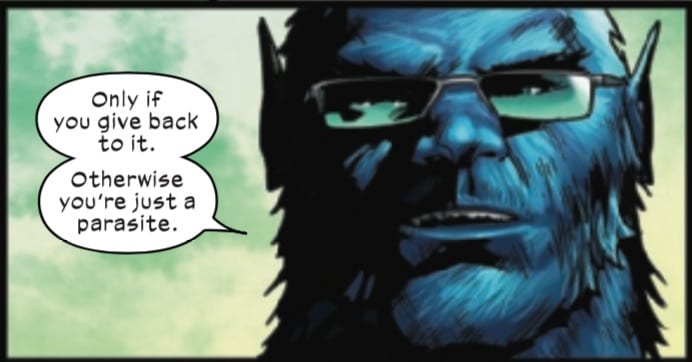 The first panel reflects his confrontation with Omega Red, which makes sense because readers of Wolverine know that Omega Red is up to no good. The second panel, however, depicts Beast confronting Colossus, his longtime friend, and ally. We definitely see a Beast in this issue, which is too smart for his own good and is letting his power go to his head.

Caramagna’s letters are serviceable for this issue. There are a lot of character interactions in this issue, but the dialogue never gets out of control and is well-constructed around the images. Likewise, Caramagna’s sound effects are subtle and merely accentuate certain actions beats.

There are, however, two prose pages in this issue. The first is from Beast’s log, explaining his reasons for parading Colossus through Krakoa. I have some doubts about the necessity of this panel. It certainly fleshes out Beast’s motivations, but this is an example of something being told to an audience when it should be shown (although it does avoid expositional thought balloons).

The second prose section is actually interesting, reflecting some sort of third-person journal or autobiographical novel of some sort being written by Colossus. The last paragraph has been struck through, but readers get a glimpse into the darkness of Colossus’s thought life and a potentially different fate for Beast (if Colossus didn’t have so much self-control).

X-Force #12 is another part of a tapestry being created for the X of Swords event. Krakoa will be facing many threats from all sides, which now includes Mikhail and Xeno. Beast flirts with fascism and continues to be dragged through the mud as a character. Someone should really stop putting him in charge of things after Astonishing X-Men and the Illuminati and All-New X-Men and Secret Empire…should I go on?

I am curious to find out what Percy is planning for Omega Red, as he has figured prominently in both his Wolverine and X-Force series (although seemingly in disconnected ways).

What did you think of X-Force #12? Are you excited about X of Swords? And do you think a reckoning is coming for Beast? Tell us in the comments below!

Beast plays around with fascism and devious alliances form on the path to X of Swords!Review: X-FORCE #12 - Beast Plays With Fascism