Writer Kelly Sue DeConnick teams up with artist Gene Ha to weave the 2nd part of their mythic tapestry in Wonder Woman Historia: The Amazons #2. With colors from Wesley Wong and letters by Clayton Cowles, this issue offers the same brand of grandiose and powerful storytelling as the prior issue and gets us closer to the creation of the Amazons as we understand them. With a deeply powerful script from Deconnick and staggering visual work from Ha and Wong, this chapter continues what could end up being one of the greatest stories DC has ever published.

“The second installment of the jaw-droppingly ambitious history of the Amazons finds their future queen, Hippolyta, cutting a swath through the world of men, desperate to be reunited with the astonishing women who saved her life…but unfortunately for her, they’re hard folk to find. Perhaps it is the will of the Goddesses that they cross paths again…but before that moment, Hippolyta will gather to herself a tribe of her very own—and find that the hearts of all women do not necessarily burn with a flame as righteous as her own…” 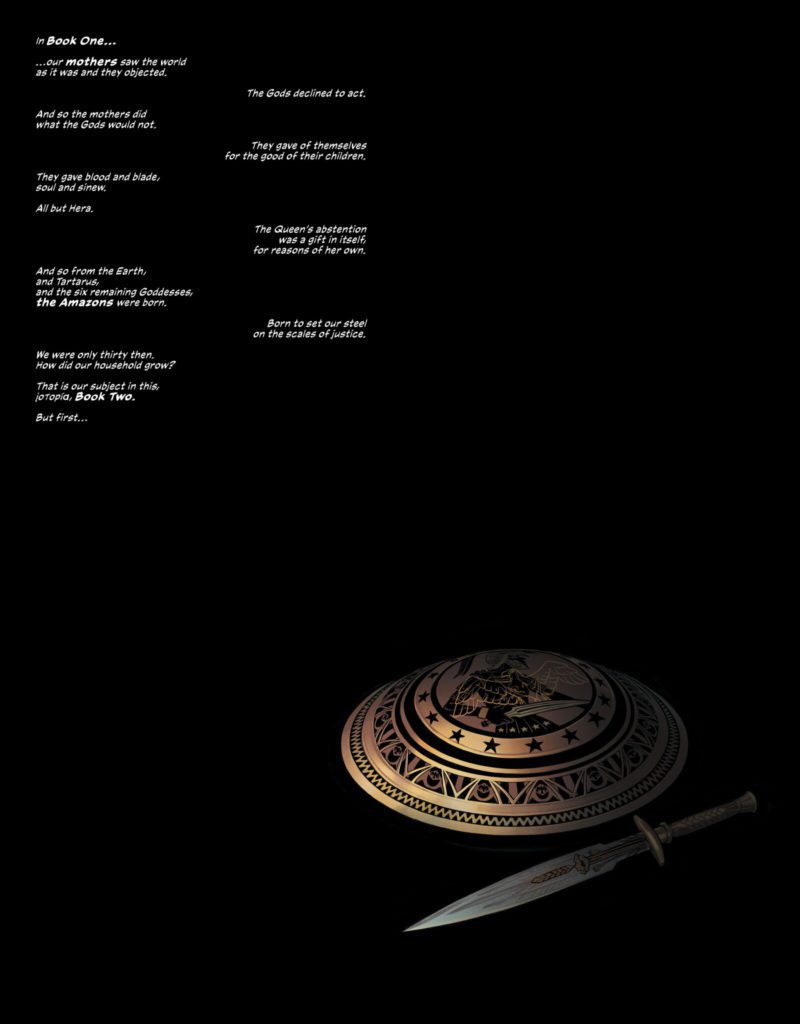 Having gotten all the groundwork done in the opening chapter, Kelly Sue DeConnick is able to launch further into the story proper in Wonder Woman Historia: The Amazons #2. This issue feels less massive and epic than its predecessor, but this is clearly intentional. Our focus in this comic shifts from the Goddesses of Olympus to Hippolyta herself as she becomes acquainted with the Amazons who saved her. Much like the prior issue, this comic has this dual nature of feeling faintly familiar while also being immensely distinct. Hippolyta, future queen of Themyscira and mother of Wonder Woman, is certainly still the character long time readers will recognize. We’ve just never seen her presented in such a manner. Deconnick writes her with a strength and vulnerability that makes her instantly endearing. This is what’s special about DeConnick’s brand of feminist writing here and in her mainstream superhero writing as a whole. She takes traits and values typically construed as “female” – compassion, emotional vulnerability, etc. – and reframes them as strengths instead of the weaknesses they are often misrepresented as. She, and Wonder Woman, and every other great fictional woman character in this set of circumstances, are strong because of their values as women, not in spite of them.

None of that is to say that this comic spares the violence. Quite the contrary, it’s filled with bloodshed. However, that violence is used as a device in the story’s thematic complexity. When is violence needed, and when is mercy the answer? Even more so, what are the consequences for answering these questions incorrectly? DeConnick poses these questions in front of the character and we get to watch them answer. The dialogue and narration in this issue, much like the prior one, feel like the perfect formal and grand tone this mythic tale deserves. Conversations come across like riddles and lessons, and the narration sings of coming discoveries both illuminating and threatening. Deconnick nails the tone and direction of this script, making for one of the most epic-feeling comics in recent memory. 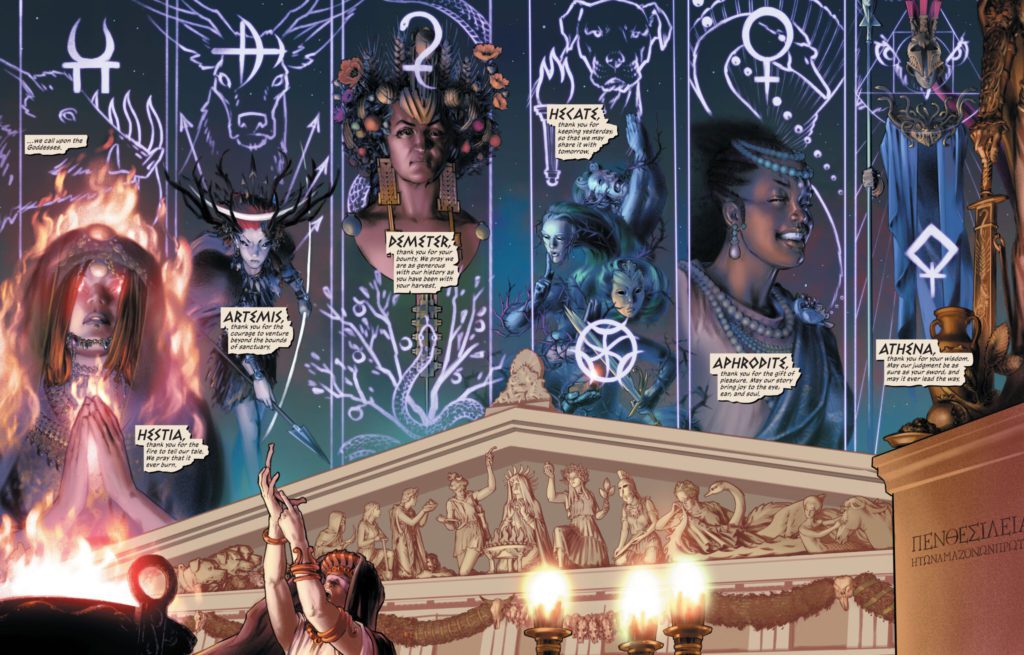 Artist Gene Ha has the unenviable position of following up Phil Jimenez here in Wonder Woman Historia #2. Fortunately, he is more than up to the task. I will be fully transparent here at the start, I personally prefer Jimenez’s work in the prior issue. However, Gene Ha also has a different sort of job than Jimenez did with this 2nd chapter. Whereas the prior issue set the stage and introduced this version of ancient Greece and the Olympians, Gene Ha is charged with telling a more “point A to B” narrative chapter. He excels in this task. His narrative direction carries the story’s visual experience with creative direction and often stunning, mind-boggling displays of artistic prowess. Ha’s details and his depictions of Jimenez’s designs are great of course, even if they aren’t quite up to par with the prior artist. His handling of the quieter thematic moments, however, are something that was largely absent from that first issue. Watching the expressions of Hippolyta and the other Amazons as they deliberate and debate is compelling due to how Ha visually frames their conversations. This comic feels especially like witnessing the building of folklore through seeing these deliberations take place. Ha’s art can unfortunately feel a bit inconsistent at times, particularly in his facial animations. However, this is completely overshadowed by the intricacies of what he ends up pulling off panel after panel.

Colorist Wesley Wong’s gorgeous, vibrant, and unique work here brings Ha’s pencils to life and makes this comic feel like an almost cosmic experience. His painted digital tones are lush and perfectly reflect the atmosphere of each page. Wong follows up the incredible coloring work of the prior issue with his own immense skill, and sticks the landing in every regard. Clayton Cowles returns with his lettering, and as always he does excellent work. His fonts are expressive and fluid, guiding the reading experience along with the proper tone in the narration and characters’ voices. Visually this book is a marvel, and a worthy successor to the impeccable first issue. 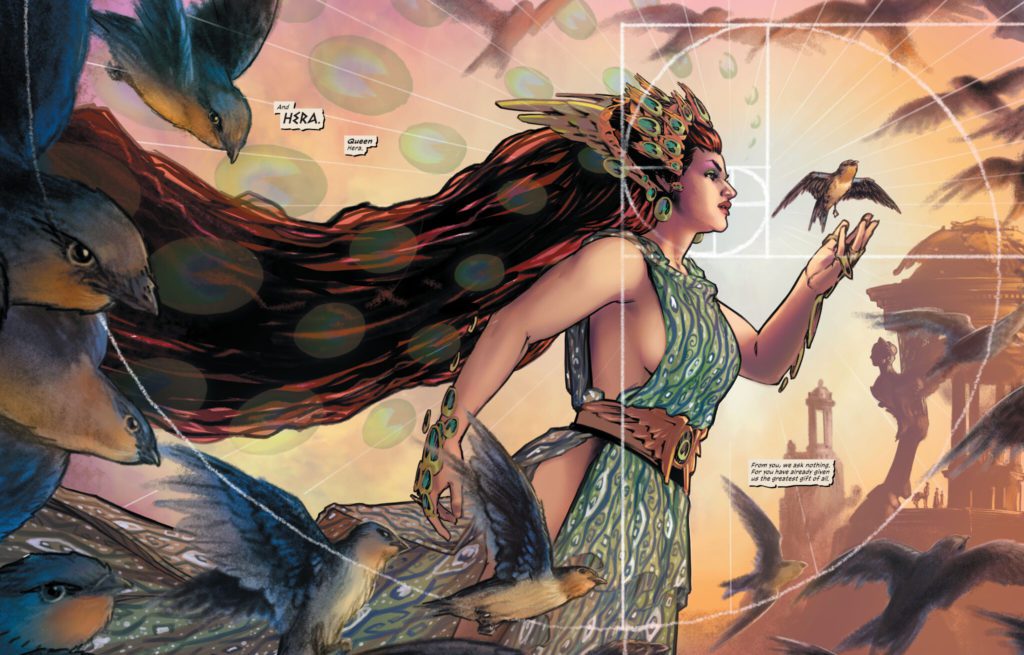 Wonder Woman Historia: The Amazons #2 is a compelling and fascinating comic that wonderfully continues the story which had its foundations laid in the opening chapter. Kelly Sue DeConnick continues the write the best scripts of her career, with this comic offering up memorable conversational scenes and well-paced, methodical plot progression. The visuals from Gene Ha and Wesley Wong are, while a tad inconsistent, overall outstanding and make for an enrapturing experience while reading through this issue. Be sure to grab this newest chapter when it hits shelves on April 5th!

As grandiose as its predecessor, Wonder Woman Historia: The Amazons #2 offers a satisfying and immensely compelling follow-up to one of the greatest opening chapters of the past several years.Review: WONDER WOMAN HISTORIA: THE AMAZONS #2 - Mercy & Wrath