Review: WONDER WOMAN #76 And The Beauty Of Mother-Daughter Relationships

WONDER WOMAN #76, available in stores August 14th, is a story of return. Readers get to see Diana Prince reunite with her mother Hippolyta in Themyscira after being separated by the dimensional barrier dividing their world from Earth. But their reunion is short-lived when Diana makes plans to return the daughter of one of her worst enemies, Veronica Cale, through the newly opened barrier.

G. Willow Wilson’s latest issue could easily have been marketed on Mother’s Day—the mother-daughter interactions throughout the story are incredibly heart-felt. We witness Diana undergo the pain of parting with her mother once again so that another mother and daughter may experience the joys of such a relationship. It’s this heroic quality of self-sacrifice that fans love about Wonder Woman—something Wilson captures beautifully in her depiction of the character.

The person assisting Diana in her journey back to the world of men is none other than the goddess Atlantiades, the daughter of Aphrodite. This poses another opportunity for a mother-daughter reunion, adding a greater sense of reassurance that she’s doing the right thing. 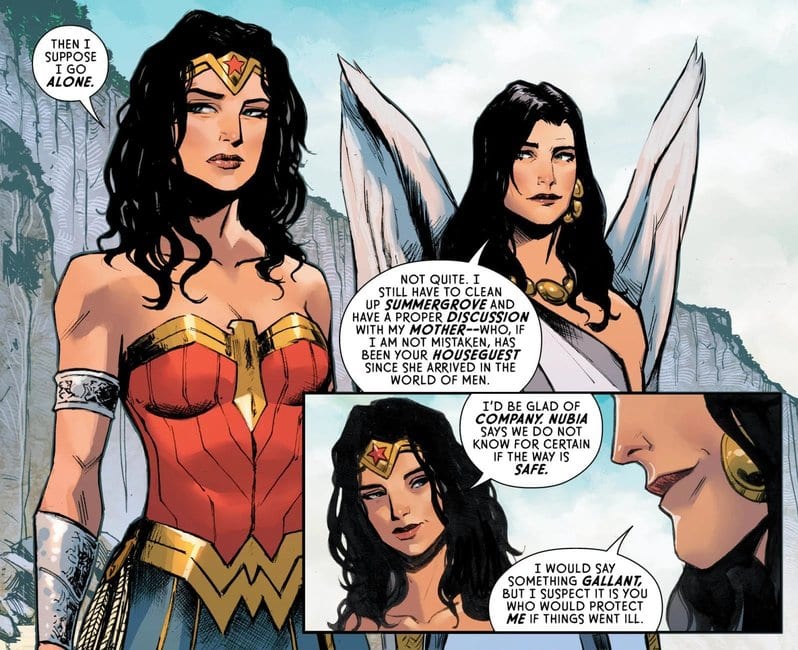 What’s largely missing from this issue is the presence of the villain Cheetah, who’s been planning to ambush the Thermysciran hero for a while now. It’s understandable that she would bide her time and cautiously stalk the warrior, but it would have presented more conflicts for the heroes to face and made for a more engaging story. Nevertheless, the realness in the familial relationships is what makes this story shine, and we’re happy to see the characters reunited with those they hold dear.

Lee Garbett’s penciling, Romulo Fajardo Jr.’s coloring, and Pat Brosseau’s lettering are stunning in this issue. Garbett illustrates Diana and the other warriors beautifully, showcasing their perfect balance of grace and fighting prowess. And Fajardo Jr.’s coloring bolsters their Themysciran environment with stunning gold shades to emphasize its enchanting qualities.

Pat Brosseau’s lettering is a strong component of the issues artwork as well. His placement of the dialogue sets the pace of the story so readers can experience the full effect of the mother-daughter interactions.

Jesus Merino and Fajardo Jr.’s main cover features Diana in a battle pose with the ever-elusive Cheetah attacking her from behind; this reminds the reader of the villain’s plotting amongst these joyous occasions. Jenny Frison’s variant cover is a slight variation of this, depicting Diana and Cheetah’s claw in front of a dark red background to highlight the danger lurking around every corner in their world.

WONDER WOMAN #76 is a great transition issue which places Diana back in her rightful position: the bridge between Themyscira and the world of men. We’re excited to see what new adventure the warrior princess embarks upon in WONDER WOMAN #77.

Did you wish Cheetah had played a larger role in this issue? Let us know in the comments below!

Review: WONDER WOMAN #76 And The Beauty Of Mother-Daughter RelationshipsA story of returning, showing the incredible relationships between mothers and daughters.