Review: When New Players Enter the Field in ONCE & FUTURE #15

ONCE & FUTURE #15, available Wednesday from BOOM! Studios is about to complicate further an already dangerous situation involving legends of old and the havoc they can wreak on the modern world.

The McGuire family has long stood on the line between legends and humanity. There was a time when they were the defenders, willingly giving up their lives to protect others. For some, that is a fact that still holds true. For others…well, not so much.

The family dynamics alone are enough to make this the conflict of the century, and that’s before they started bringing legends and lore into the mix. Now it seems like every life is on the line, as at any moment, a monster has the chance to appear and cause some genuine damage.

Once & Future #15 is about to throw Duncan and the rest of his family back into the thick of things, as he and his grandmother seek to learn the damage one of their own has wrought. As always, there is a difference between knowing what has been done – and seeing it. A lesson that they’re about to learn the hard way.

The entirety of the series has been moving forward in leaps and bounds, so when I say that Once & Future #15 progresses the plot faster than any of its predecessors, I want the weight of that statement to be acknowledged. It feels like a hundred different things happened in this issue when in reality, it’s really just a few enormous implications that raised their heads.

Since Kieron Gillen writes it, that probably shouldn’t be too much of a surprise. The issue is split into two main narratives, which isn’t an unusual tactic. Doing so allowed readers to better grasp what is happening in the world – all while experiencing a sense of anxiety as tensions rise.

The culmination of which brings with it a couple of major surprises. This twist is unlike any other in the series, which is saying something. Well, one of the twists, at least. The other one looks about par for the course with Duncan’s luck.

Together, both endings are enough to leave readers looking forward to the release of issue number 16, as there are so many questions that need answers. Gotta love a series that worms its way into your brain, yeah?

The entire series has been a display of vibrant and wonderful artwork, yet in many ways, Once & Future #15 has some of the most striking designs yet. The characters, the scenery, and so much more all work together flawlessly with the plot itself.

Dan Mora’s latest monster (thing of legend? Whatever one feels compelled to call it) is…fascinating. Not at all what the legend would have you picture, and yet it is so painfully perfect at the same time.

Combined with Tamra Bonvillain’s colors, it makes for a striking appearance. Her colors are actually stunning all around, but especially so when there’s magic to be portrayed. That’s when the pages start to truly pop.

The lettering, provided by Ed Dukeshire, is the grounding that this artwork needs. His work frames the panels, setting the scene in subtle yet vital ways. The result is one cohesive piece that is delightfully visually compelling. 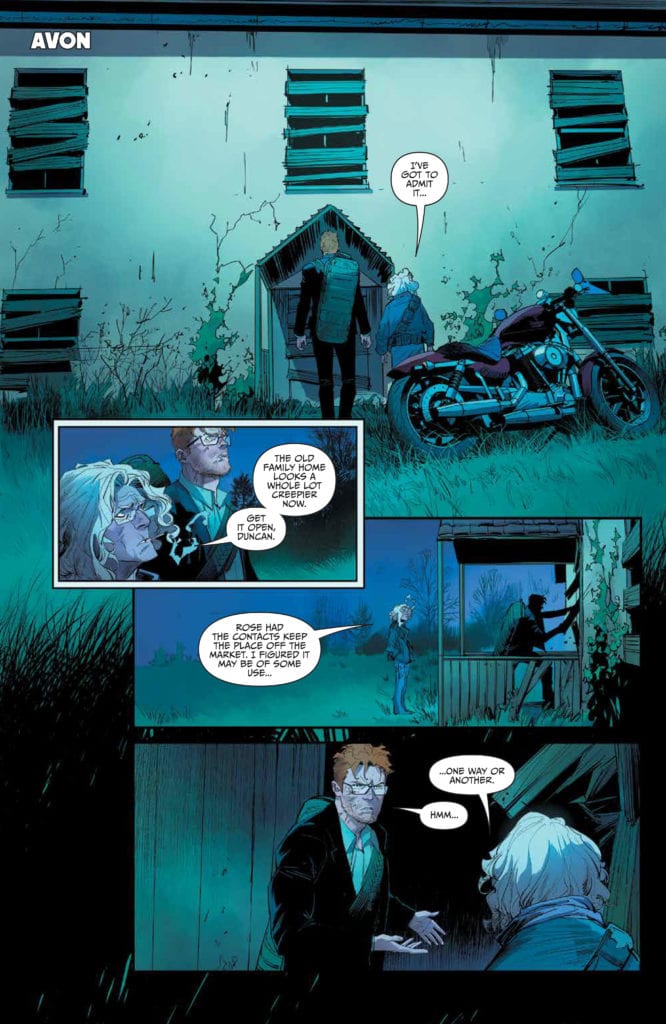 Once & Future #15 brings many changes, hints, and concerns, all of which have worked well to increase the tensions for this series. It’s hard to believe that the ante is still being raised, but the evidence is all right there in front of our eyes. The real question is, how much longer can the McGuire family hold out?

Review: Slowing Down in FLAVOR GIRLS #2

Review: A Multifaceted Battle in the Works in ONCE & FUTURE #24

Once & Future #15 is bold and brilliant in the best of ways. The new twists are truly that, while still fitting with the story thus far. Throw in the stunning artwork, terrifying (yet compelling) monsters, and you've got yourself a memorable issue. Review: When New Players Enter the Field in ONCE & FUTURE #15