FLASH FORWARD #6, available in comic book stores Wednesday, February 19th, concludes the action-packed, heart-felt mini-series from Scott Lobdell, Brett Booth, and team. After being exiled to the Dark Multiverse to purge the dark matter in the worlds within, Wally West has finally reunited with his children. And through these actions he’s become the beacon of hope he always wanted to be. What’s more, he recently reunited with his kids from the pre New 52 reality. But what he doesn’t know is that the world they’ve been stranded on is of his own creation, and it holds the key to his ultimate role in this chaos.

Lobdell’s writing throughout this arc shows just how immersed he is with the character of Wally. From the anxiety and guilt fueling his actions in the race to save the multiverse, to the warm embrace of his children in this issue, readers are treated to a fully humanized hero who’s overcome their demons. 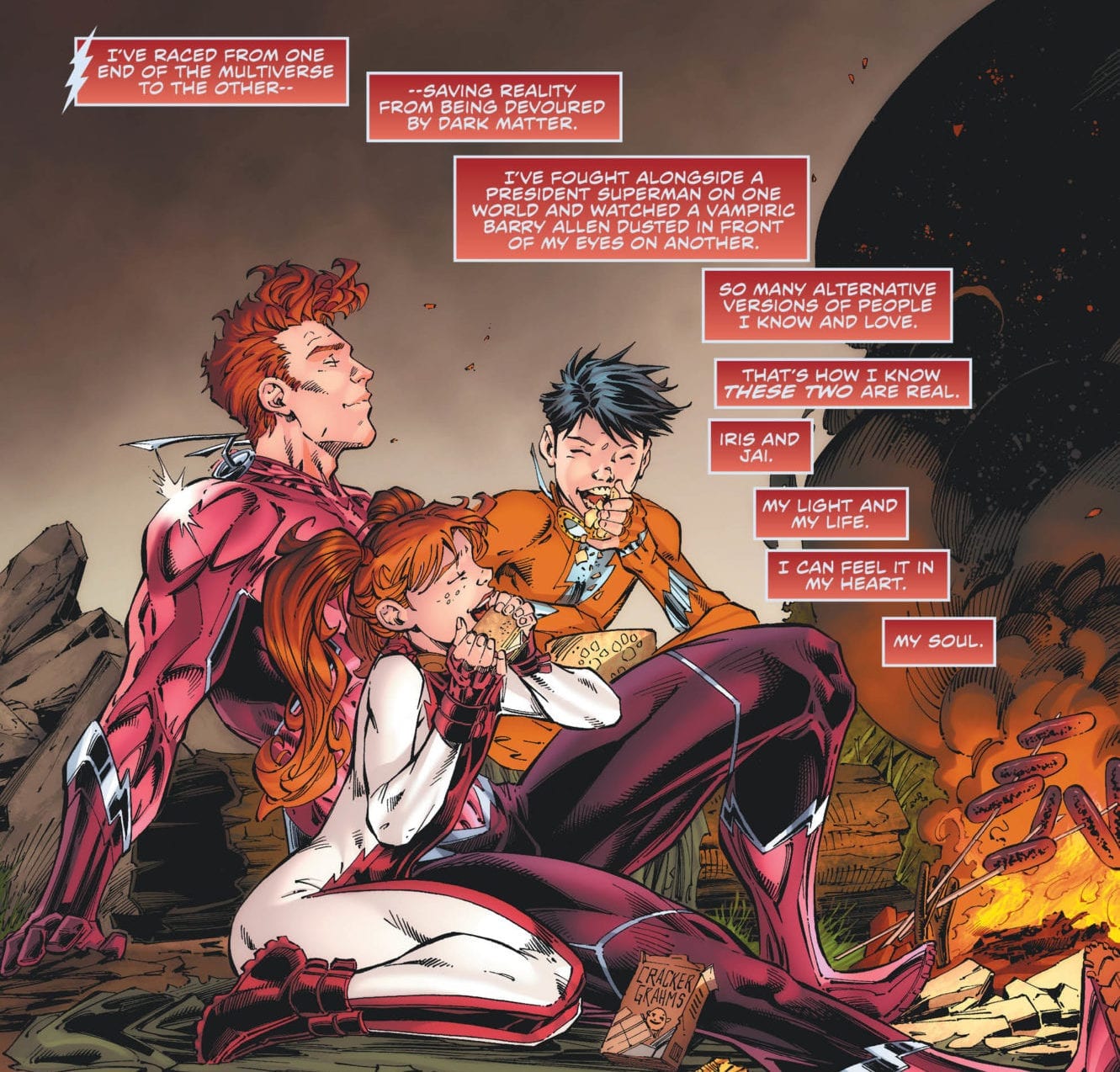 Wally wants nothing more than to spend an eternity with his children after being separated from them for so long. He enjoys a few nights of peace with them to make up for lost time, but is led away from their campsite to speak with Tempus Fuginaut. The cosmic being informs our hero that his main mission was to destroy this very planet housing his children, using the Mobius Chair to do so. 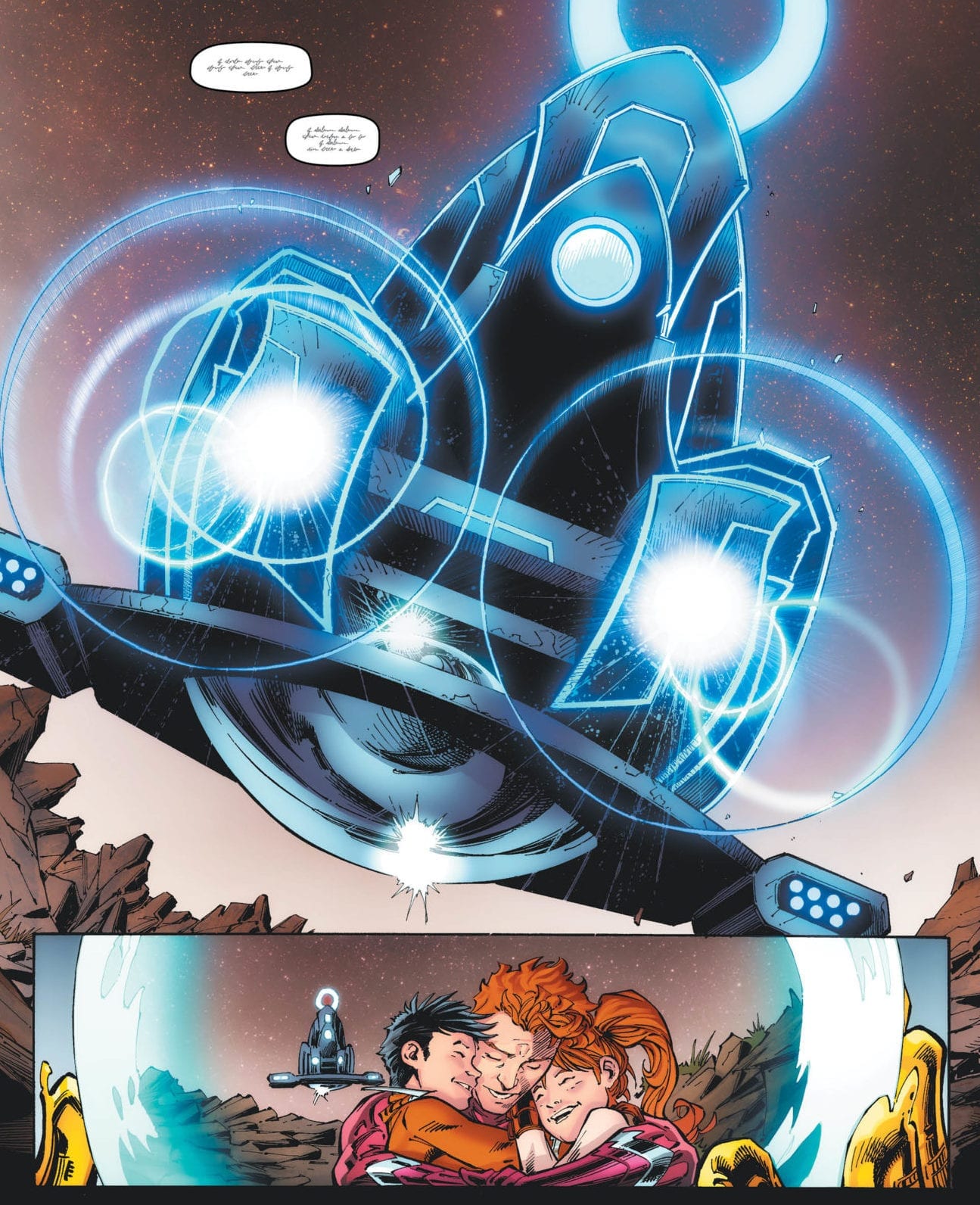 The decision Wally makes in the end is both heart-warming and heart-wrenching; it’s a choice that will change the foundation of the multiverse as we know it.

Booth’s penciling, with Norm Rapmund’s ink work, presents panels full of fluidity and motion, matching the mobile nature of Wally. Combined with Luis Guerrero’s coloring, we’re treated to varying shades of reds and blues, representing both the Scarlet Speedster and the flashes of light emanating from the Mobius Chair. ALW’s Troy Peteri’s lettering fits nicely into these effects by placing the dialogue/thought bubbles in such a way that it appears to be zapping into panels like the lightning that’s always present.

Doc Shaner’s main cover artwork gives readers a god-like illustration of Wally holding the Earth in his grasp. This seems to represent the powers he will gain from the Mobius Chair, and, more importantly, where he will set his sights next.

Inhyuk Lee’s variant cover is of the same ilk as Shaner’s, though this edition places our hero in the Mobius Chair itself. His stoic appearance suggests a possible change in demeanor in Wally’s future.

The anticipated conclusion in FLASH FORWARD #6 is immensely satisfying. It completes the character arc for Wally that began in Heroes in Crisis and opens up the realm of possibility for individuals within the the Flash mythos.

What do you think is in store for Wally following this issue? Let us know in the comments below!

Review: Wally Makes A Huge Sacrifice In FLASH FORWARD #6Lobdell's writing throughout this arc shows just how immersed he is within the character of Wally.