Since the kick-off of the second half of The Walking Dead’s sixth season, everyone involved with the show began teasing what was to come. We were promised the premiere of the villainous, diabolical Negan. We were told not everyone would make it out alive. We were promised a season of The Walking Dead unlike any other. And that’s what we got. But to be clear, what was got was NOT good. The Walking Dead’s season finale, “Last Day on Earth,” was nothing more than the writers deciding to troll its viewers. We saw Negan for a total of ten minutes, and sure, they were evil minutes, but noticeably sparse compared to what we were promised. If you compare screen time and overall impact throughout the episode, this season might as well have been leading up to the big bad being Dwight, or the Grand Theft Auto Trevor actor. Negan seemed like he would breathe new life into the show (by delivering a whole mess of death, mind you) but instead, we only get him for a short amount of time, and our real Season 6 villain turns out to be a guy who looks like Cricket from It’s Always Sunny in Philadelphia.

And then comes the season’s big “death” that we were promised. I wrote up an article detailing my Top 5 candidates for deaths, based off the lead-up to a big, meaningful death. And to be fair, someone did die – but we have no idea who it is. They lined up all the major characters, only to cut to a mystery POV at the last minute. There was no real combat at all in this episode – the gang fled from Saviors TWICE, watched a makeshift barricade burn down, and come up with a RV ruse that somehow fails – and again, we have no idea how or why it failed. It just did. Now it’s not like The Walking Dead is obligated to answer every mystery it presented in the finale, but it should’ve resolved something. That’s what finales are for! “Last Day on Earth” is garbage, for the same reasons the Season 3 finale was garbage – it doesn’t do anything to put a real endpoint to the action – rather, it was only in this episode that the real action came about. And at least in Season 3, we got to see The Governor throughout.

However, “Last Day on Earth” did do one thing effectively – it made me care about Carol again. For this second half of the season, the writers have been doing their hardest to strip everything good about Carol away, leaving the same scared housewife from Season 1. At least with her face-offs with Morgan (feel familiar?) and the remaining Savior, we got a Carol that could be hard and unflinching in her resolves. She isn’t just a scared woman, unwilling to kill – in this episode, she makes it clear just why she left. She knows that the loss of her killer instincts come with a death wish, and in the face of death, she laughs, knowing she doesn’t deserve this release, but that it’s found her at last. 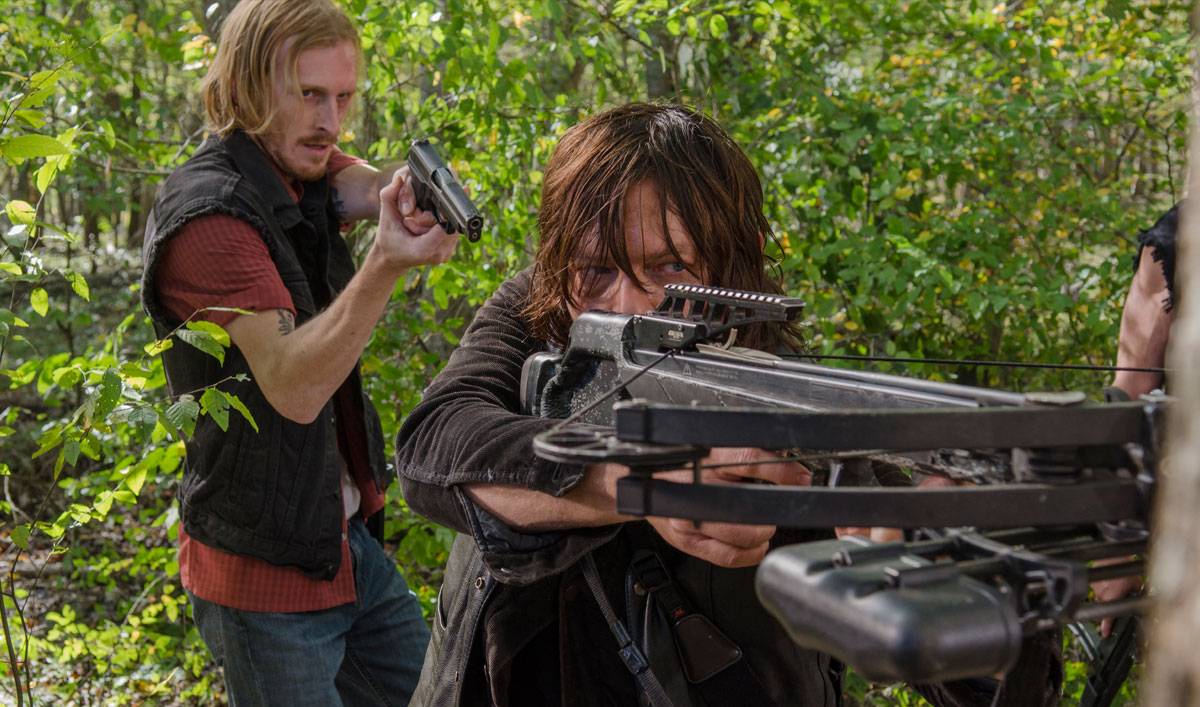 And for anyone concerned about the fate of Daryl Dixon from last week’s episode, never fear – he’s alive. Of course, we don’t get any explanation as to how he’s totally fine. He’s a bit bloody, sure, but much like how the Great RV Ruse failed, it’s left up to the viewers to suspend disbelief and just assume the writers played with our emotions like that for a good, justified reason, despite the fact there appears to be no proof of this.

“Last Day on Earth” does nothing to satisfy the audience, nor does it tie up any plot points explored in the season. Rather, it feels like the mid-season finale for Season 7. This season should have ended on a powerful note, like “No Way Out” – big deaths, lots of zombie-fighting, and just enough uncertainty to whet the fans’ appetites, keeping them on the hook. Comparatively, “Last Day on Earth” just feels like a right hook to the face – purely offensive, not a shred of satisfaction, and making the fans wait several months just to know what the hell they had to sit through. The Walking Dead is as bad at ending its season as its characters are at avoiding roadblocks & toll booths. Essentially, every bit of hype building up this episode has been just that – hype. Nothing of real substance or importance justified this episode’s gravity, certainly not enough to justify the longer run time. If this world is just, AMC’s executives will give their PR personnel a pat on the back as they line up The Walking Dead’s showrunners for execution.