Review: VINYL #1 Is A Neon-Burst Of Bloody Goofiness

From Plastic creators Doug Wagner and Daniel Hillyard, along with colorist Dave Stewart and letterer Ed Dukeshire, comes an insane new comic dripping with absurdity and bits of human anatomy. Vinyl #1 is a sharply written, fast paced, and deviously funny opening chapter to this six-issue mini-series. With an airtight script and wildly vivid artwork, this is a debut issue not to be missed.

“When Walter’s best friend, the FBI agent charged with his capture, is kidnapped by a death cult of all-female sunflower farmers, Walter finds himself deep within an underground labyrinth filled with secrets and monsters…but are their monsters more horrific than his?” Doug Wagner’s script for Vinyl #1 is a stellar mix of tight and engaging writing and weird absurdity. The ridiculous premise sells itself in the comic’s opening scene. This story’s grindhouse sensibilities and oddly endearing characterization pulls the reader into this tale’s absolute wackiness. Despite his true life as a fuzzy bear ear-wearing mass murderer, there’s a charm and likeability to Walter that makes him an almost loveable anti-hero. His hapless nature in his normal life makes him come across as a harmless old man who is aware of his dual nature, but does his best to keep it at arms length.

This, along with the general premise of the book, is what separates this comic from other cringe-inducing serial killer fiction. Walter isn’t some charming and handsome man posing as a gentleman so he can achieve his murderous goals; he is instead a peaceful old man who rides a bike and listens to classic tunes. Unfortunately, he has a near-uncontrollable side of himself that murders rampantly when he puts on a bear hat. If that last sentence doesn’t make you want to read this I don’t know what to tell you other than “But wait, there’s more!” There are a ton of different ingredients thrown into this plot-blender, including a disturbing Midsommar-esque cult that ties into the FBI investigation of our friendly neighborhood serial killer. This is a truly fun comic to read, with a script that is a sharp and twisted delight. 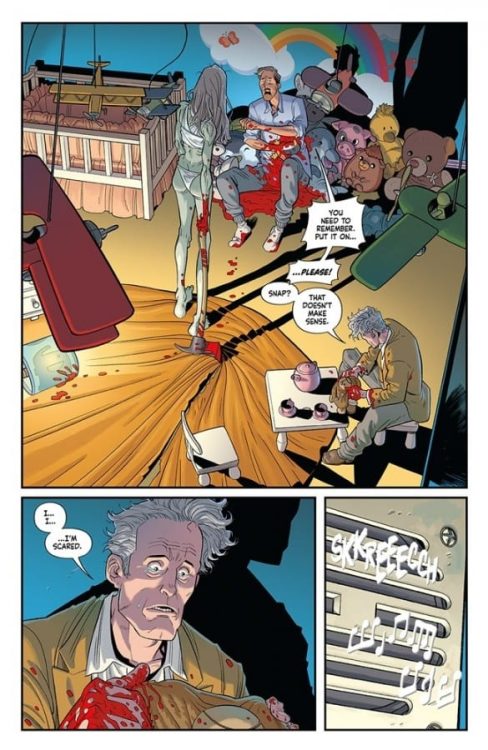 This sort of blood-drenched and twisted endeavor would fall apart if the right art team wasn’t on hand to craft its aesthetic. It’s a good thing then that Vinyl #1 has artist Daniel Hillyard and veteran colorist Dave Stewart on hand to deliver this comic’s outstanding design. Hillyard’s pencils are rife with lively animations and detail that sell the characters brilliantly. The wiry and joyful Walter has the look and presentation of a happy-go-lucky older man incapable of harm – who is able to seamlessly transform into a machine of murder with ease. The over-the-top nature of the comic works so well because of just how goofy and fun the aesthetic is made out to be, which is by design. Hillyard’s sense of expression and his almost cartoonish illustrations of murder and gore are what make this comic’s crazy premise work; that and of course Dave Stewart’s colors.

The now legendary colorist behind the likes of Hellboy and Black Hammer always manages to pick the perfect palette and style for whatever he is working on. And the same goes for this comic. Every image here explodes with bright, neon hues that give this issue its zany and bombastic overall tone. The panels pop in an almost 3-D fashion, and all of the surfaces have a super-clean sheen over them, but in a way that works perfectly for the story. Images of people being dismembered and gutted are reminiscent of piñatas being burst open. The lettering from Ed Dukeshire comes out in a big, simple font that has a sort of volume that matches the rest of the insane experience. This is a phenomenal looking comic book, with a detail and engrossing aesthetic that fits the sort of absurd story being told in these pages. 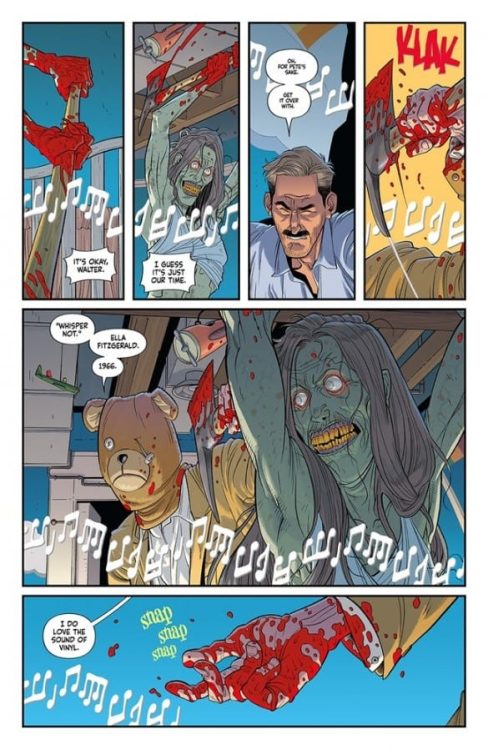 Vinyl #1 is an absurd ride of an opening issue, with a blend of different ideas and trope-breaking concepts all thrown into a single comic that manages to work stupidly well. The script from Doug Wagner is a silly and concise spin on the serial killer genre that subverts the genre with its well-meaning protagonist and teddy bear-hat wearing antics. The art from Daniel Hillyard and Dave Stewart is vivid and brilliant, with outstanding character animations and colors that pop so much that you will be wiping the blood-spray off of your face. Be sure to check out this ridiculously good time when it hits shelves on 6-23!

Wagner, Hillyard, and Stewart deliver an absurdly over the top and darkly hilarious opening chapter of cults and teddy bear-clad murder, with a sharp script and brilliantly vivid artwork.Review: VINYL #1 Is A Neon-Burst Of Bloody Goofiness