Review: It’s the End of All Worlds as We Know them in VENOM: THE END

As the name implies, Venom: The End, out this week from Marvel Comics, gives us a glimpse into a bleak inevitability.

The alien symbiotes have been an integral component of the Marvel universe for decades. What happens, though, when the host of a theoretically-immortal symbiote ages and dies? What happens to the original Venom symbiote one hundred years into the future? Or a thousand? Or a billion? Who can play host to the symbiote, when there’s no one left? 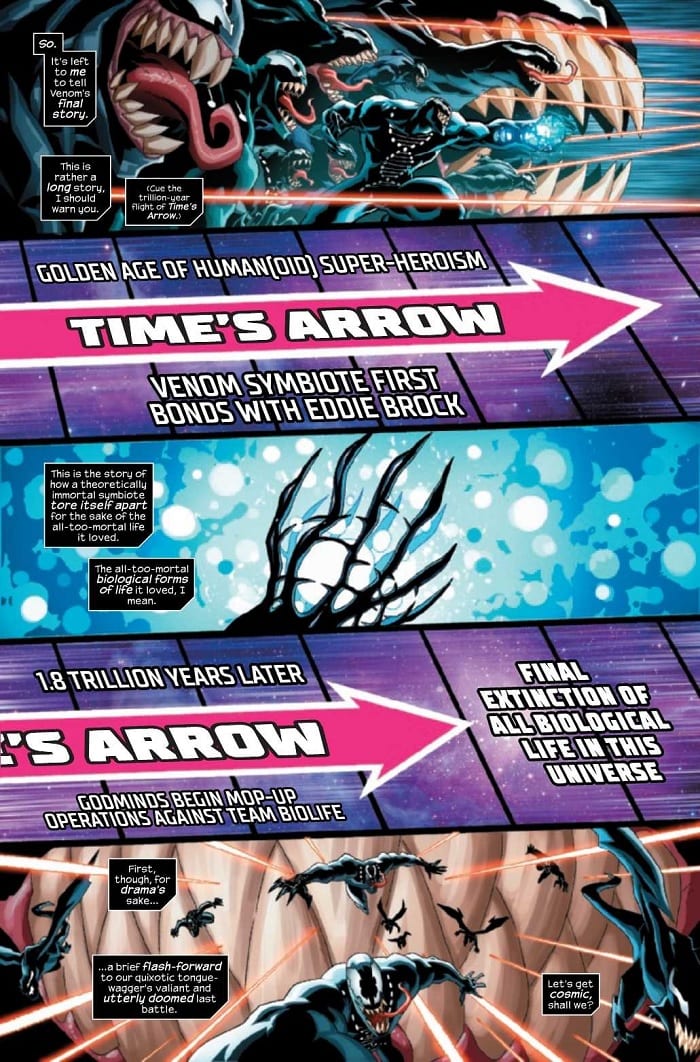 Venom: The End opens far in the distant future, during the last battle between bio-organisms and machines. It’s a battle we’re told up front that organic life will lose. From that cheery point in time, we jump back to see how the Venom symbiote became the last defender of life in the universe.

Writer Adam Warren offers up a taste of what the far-flung future may hold for the Marvel Universe. The book establishes Venom as not just an alien, but a creature capable of being a god unto itself. By book’s end, that’s what he becomes, in multiple different capacities. Warren runs with the concept of the symbiote codices that were integral to last year’s Absolute Carnage event, giving Venom a window to potentially channel just about any life form that’s ever existed.

Venom: The End is a fairly dark vision. We see Eddie Brock’s deterioration over centuries as the symbiote tries in vain to stave off the inevitable. This same cycle repeats through the ages, with the symbiote always left behind by its host. Despite the heavy theme, there’s still a sense of humor, and even hopefulness, that shines through at points.

The book is a fascinating, high-concept story. It’s main obstacle, though, is its own scope. The storytelling is mostly expository, explaining how Venom survives through the ages. Because it covers so much ground, it’s not exceptionally engaging. The narrative’s format forces Warren to forego much of the detail that typically constitutes a narrative. Warren has to devote more time to extended techno-babble to justify how this all works out than he does constructing the dynamics of the story. As a result, it ends up feeling more like a synopsis.

To illustrate, compare Venom: The End to another Marvel title out this week, Spider-Man: The Black Cat Strikes #1. The former is a cosmic-level epic spanning the universe across hundreds of billions of years, while the latter is a much smaller, street-level story. However, Black Cat Strikes feels more compelling, because we’re engaged with the characters in the details of the narrative. 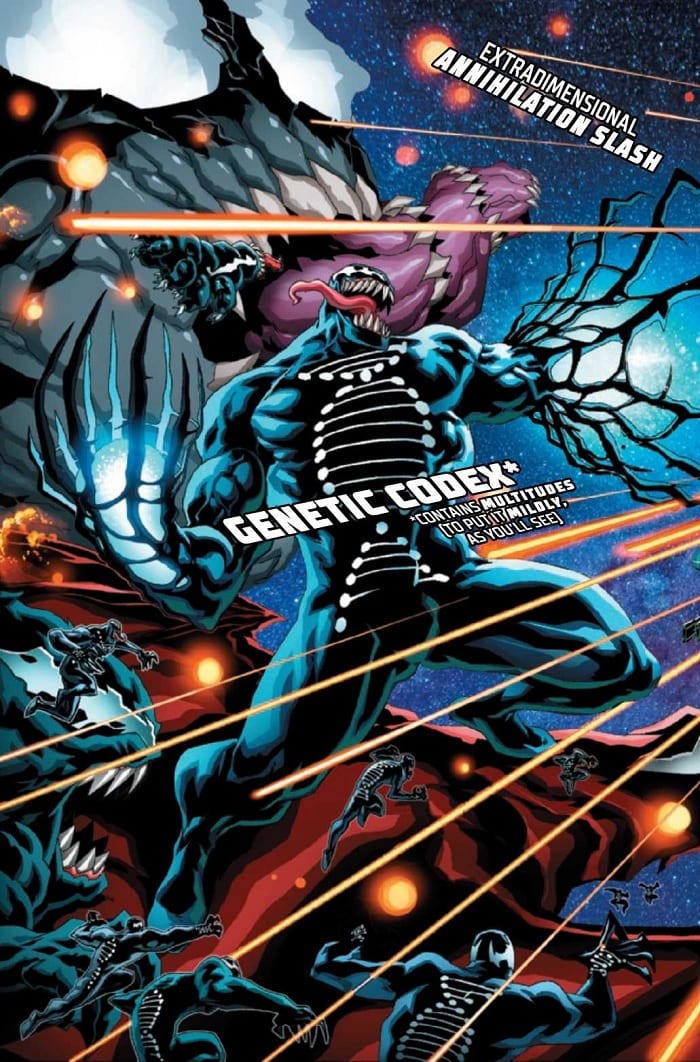 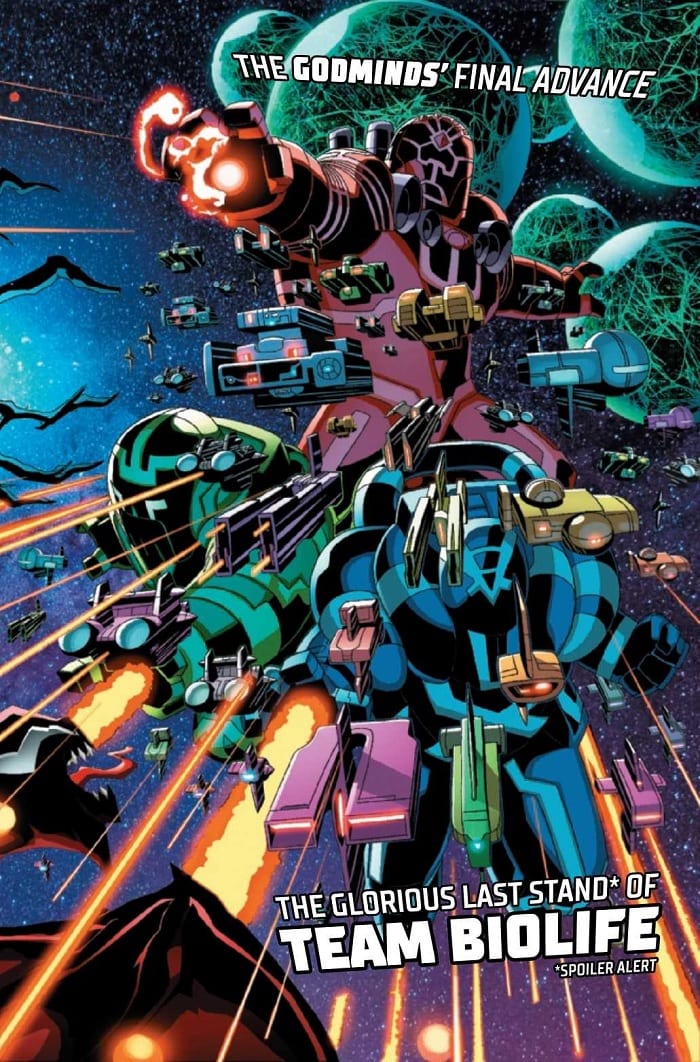 The artwork, courtesy of Jeffrey “Chamba” Cruz, possesses a free-flowing and chaotic energy. The artist goes for creative page layouts, often designed to evoke the theme of the narrative behind presented. It’s solid on a frame-by-frame basis, with some genuinely-stunning moments at points. Venom, being the main fixture of the book, has an appealing design, and Cruz gets to unleash his imagination with many of the space settings.

The artwork in Venom: The End has plenty of energy. Overall, though, there’s little “flow” holding the book together, and Cruz’s maximal approach of packing each page with visual information accentuates that trait.

This isn’t entirely Cruz’s fault; the limitations imposed by the story’s structure and scope make it difficult to create a fully-cohesive vision for the book. That said, when every page overloads the reader with visual information, it becomes difficult to focus on any one element. As a result, there are few moments which really arrest the reader’s attention.

Guru-eFX (a two-person team of Joe Weltjens and Lee Duhig) provides the colors for the book. While they have an almost-too-sleek, digital aesthetic, the work is still nicely detailed. Soft, ethereal blues and alien purples dominate the book, which give it a nice, spacey effect. 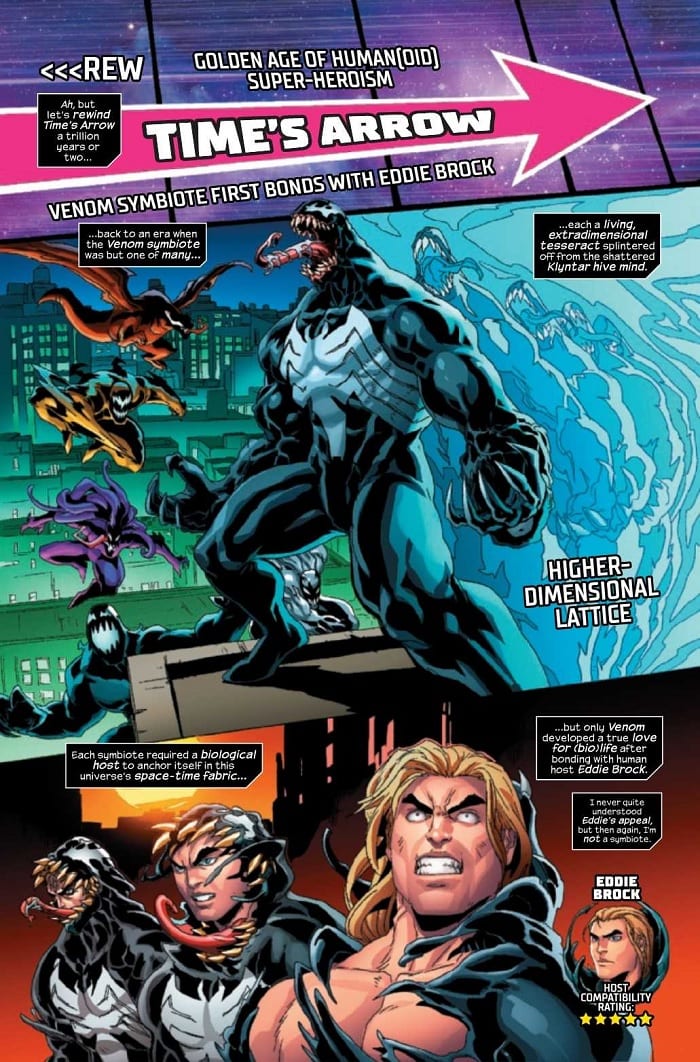 Venom: The End could have been a fantastic story for a mini- or maxiseries format. As a one-shot, though, there’s just not enough room to flesh out Warren’s vision. While it’s a good outline, this book could use more space to breathe.

Review: It's the End of All Worlds as We Know them in VENOM: THE ENDVENOM: THE END is a great story concept. It sets us up for a cosmic-level tale that transcends reality. Ultimately, though, the book's one-shot format doesn't afford enough space for the story to really come to life.