Review: VENGEANCE OF VAMPIRELLA #6 Is A Supernatural One-Shot With Some Rough Spots

VENGEANCE OF VAMPIRELLA #6 is a creature feature that matches the spirit of Vampirella’s creator, Forrest J Ackerman. However, some rough art and clunky writing put a damper on the moody fun.

Lucio Parrillo painted the main cover, and it’s gorgeous. If I had a full print of this cover, I would hang it in my home. Parrillo captures Vampirella’s seductive beauty and dangerous potential in one simple pose. I can’t praise this cover enough.

The overall story by Thomas Sniegoski is simple, unique, and interesting. Something causes a supernatural jungle to suddenly sprout in the middle of Virginia, and Vampirella is called in to stop it. The jungle is growing fast, and it’s populated by assorted mythical monsters.

However, where the plot works, the narration and dialog do not. Sniegoski liters the narration with odd grammatical choices that make it cumbersome to read. The narration is not necessarily wrong or bad; it just doesn’t flow. A few passes of the “read aloud” test would make it a cleaner. 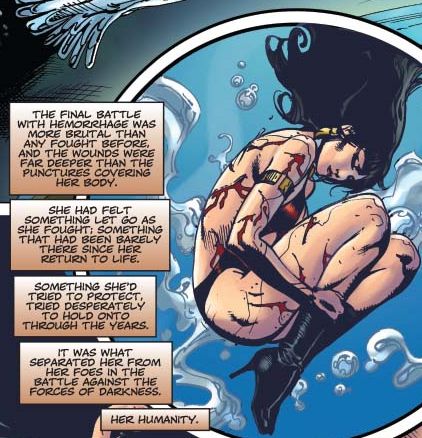 Troy Peteri checks all the right boxes with his lettering. It’s clear and easy to distinguish between conversations and narration. The letters stand out boldly, and the lines don’t look cluttered.

Ori Remalante Jr.’s coloring is another highlight of this issue. Most of the action takes place in panels overrun with jungle. That’s a LOT of green, and it would be tempting to lose focus on where Vampirella is placed at any given moment. Not so here. Remalante Jr. keeps the surrounding foliage distinctive and structured in a way that avoids having every panel crowded out with a green blobs.

I liked parts of the pencils/inks by Roberto Castro, but was put off by the lack of consistency. In some of the earlier panels, Castro inks characters characters with a very rough, sketchbook style. Castro’s creative choice can work if it’s carried through the whole issue. Here it is not. 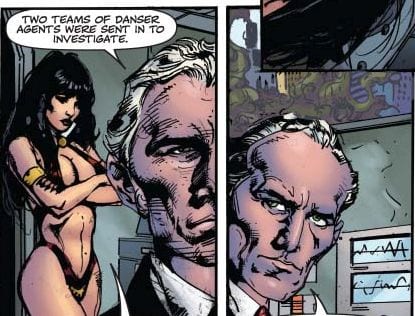 Others panels do not have that rough style. The book sometimes looks like it was drawn by different artists on different pages. It would be more visually appealing to choose a style and keep it through the whole issue. 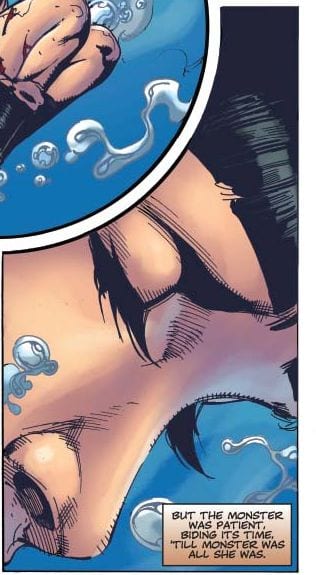 VENGEANCE OF VAMPIRELLA #6 has a fun story and a superb cover, but the clunky writing and inconsistent art put a damper on the fun. Recommend picking up only if you’re a Vampirella completest.

- Advertisement -
1702
Find out how to get the
Monkeys Fighting Robots magazine!

Preview: A MAN AMONG YE #1 Sailing The High Seas In Style

On the surface A Man Among Ye is a fun pirate romp with all the classic swashbuckling action you could want.
Read more
Comic Book Reviews

Brilliant and inclusive, this series of Doctor Who: The Thirteenth Doctor comics is promising to be bigger and better than the last.
Read more
Comic Book Reviews

Review: The Fires of War and Retribution Burn in KILL WHITEY DONOVAN #5

PROMETHEUS: THE COMPLETE FIRE AND STONE – What The Movies Should Be

Prometheus: The Complete Fire and Stone is the big crossover event of Dark Horse' Aliens vs. Predator universe. After the divisive introductions of the...
Read more