How does a vampire “get a life?” If you’re Vampirella, the answer is simple: team up with squadron of heavily-armed combat nuns to take on an underground group of devil-worshippers and werewolves, as she does in Vampirella #2, out this week from Dynamite Entertainment.

As intriguing as that premise sounds, though, the execution is not as consistent as one would hope. 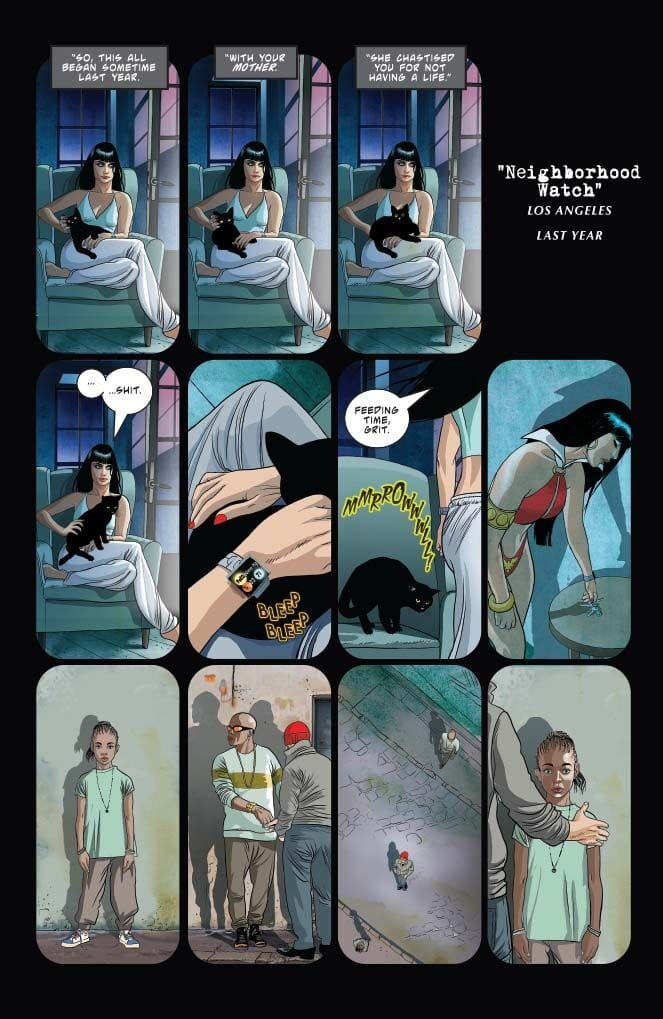 With his run on Vampirella, writer Christopher Priest seems interested in deconstructing the character, putting her on the psychiatrist’s couch (literally) to explore her persona. We can appreciate the deconstruction of a classic character. Vampirella #2 is less of a deconstruction, though, and more abstraction. We get more nonlinear storytelling, using the psychiatrist’s couch as a framing device. However, it doesn’t feel cohesive or coherent. Instead, the storytelling comes across as having nothing driving the narrative in any particular direction.

In Vampirella #2, you get the sense that Vampirella is an interesting character. That said, we’re not really seeing it transfer over to the page as fluidly. It’s as if the author is explicitly telling us the character is interesting, without giving us any actual reason to believe that’s the case. Her portrayal feels somewhat stiff, while the characters around her remain one-dimensional.

The first half of Vampirella #2 is rather dull from a storytelling perspective. A good chunk of it is more of the same banter between Vampirella and her psychiatrist. While it had a certain level of charm the first time, that quality seems to offer diminishing returns. The humor doesn’t land very effectively, and there aren’t any real narrative stakes or reasons to care that can keep the reader’s interest.

It’s in the book’s second half that when it feels like the narrative really gets underway in earnest. There’s plenty of action here, and although we don’t yet have a clear motivation for our titular character the chapter is at least compelling and catches the reader’s interest. 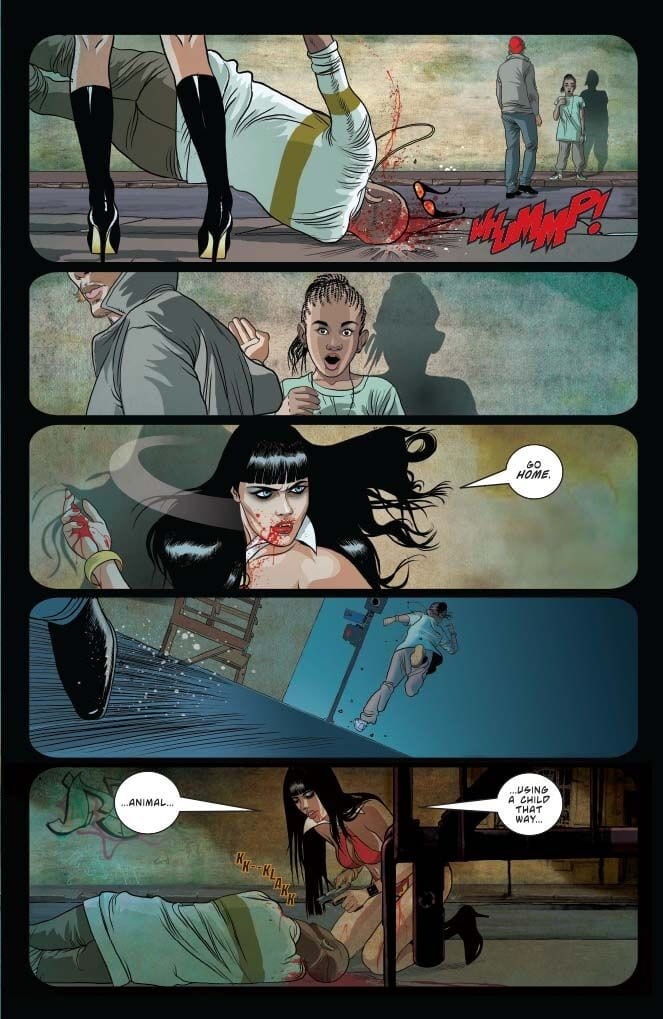 Artist Ergün Gündüz does a fairly impressive job with the material in Vampirella #2. He divides the pages into regularly-spaced panels, employing a lot of repetition and variation on his motif to provide a nice cohesive product without feeling repetitive. This is especially prominent in the book’s first half, which feels very much like a slice-of-life story.

The latter half of the issue is much more action-packed and chaotic. Gündüz manages to relay information effectively through his visuals, while also delivering some eye-catching, stylized gore. The work has a delightfully campy aesthetic in that section (werewolves vs. combat nuns, anyone?), making for a fun visual sequence.

The colors are rich and vibrant in Vampirella #2. We see lots of contrasts between dull grays and sharp splashes of red, making for a striking presentation. The only real complain in the art department is that the character designs can sometimes feel a bit static and lifeless. Otherwise, it’s a good showing.

Vampirella #2 isn’t bad. However, the first half of the book is dedicated mostly to extraneous tedium, while the second half offers action with some missing context. Check it out for yourself at your local comic book shop.

Review: Solid Action, Jumbled Storytelling in VAMPIRELLA #2The first half of VAMPIRELLA #2 feels a bit like we're spinning our narrative wheels, but not moving in any particular direction. The book's second half redeems it somewhat, but the real story and stakes are yet to show up.