STAR WARS: DARTH VADER #7, available in comic book stores on Wednesday, November 11th, takes readers on one of Darth Vader’s most grueling journeys in Star Wars canon. After failing to comply with Emperor Palpatine’s orders, the Sith Lord experiences tremendous punishment on the planet of Mustafar. Longtime fans will remember this as the lava planet on which Vader nearly perished at the hands of Obi-Wan Kenobi. 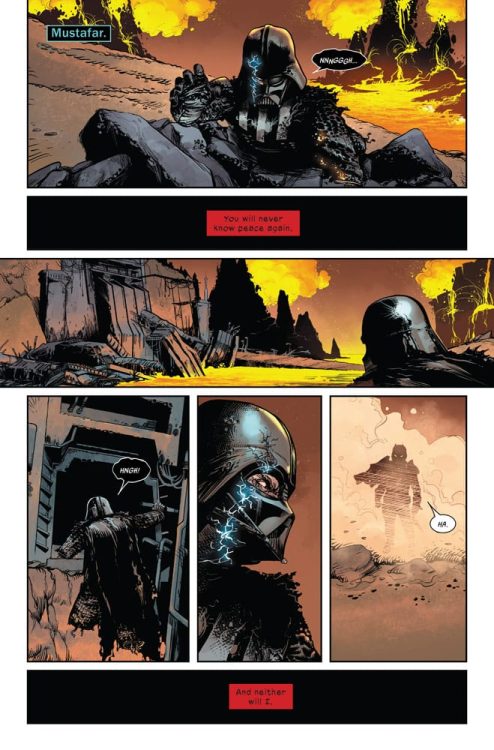 Vader finds himself in an eerily similar situation as the aftermath of his fight with Obi-Wan years ago. Most of his limbs are severed, and the heated planet surface makes it almost unbearable to touch. But in a feat of willpower fans love in the character, Vader crawls his way to the Sith Temple erected years ago.

Writer Greg Pak does a brilliant job of narrating our protagonist’s journey, both across the planet and through his memories. Readers witness events from Vader’s past — specifically those from Star Wars: Episode III – Revenge of the Sith — that retell his murder of the Jedi. This coupling of guilt from his past and anger at his present condition makes for a dynamic character. We can’t wait to see more of Vader’s internal struggle as he progresses through the saga fans know so well. 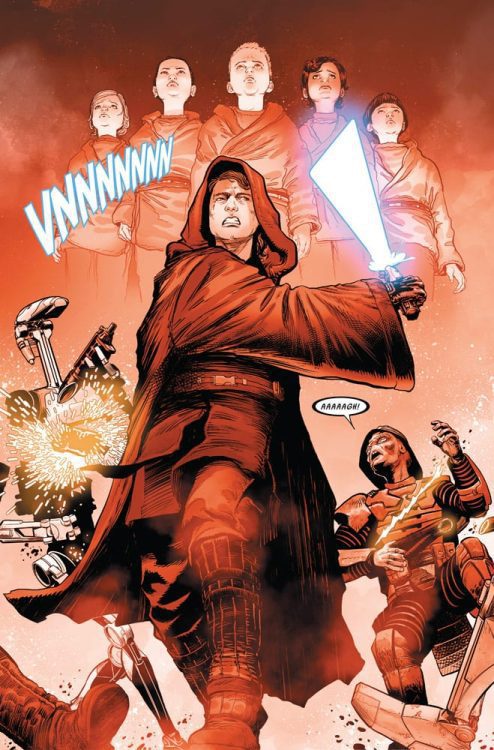 The story continues to amp up in intensity, complete with a Sith assassin and a mysterious voice communicating to Vader psychically. And readers will be stunned to learn identities.

Raffaele Ienco’s penciling and ink work, Neeraj Menon’s coloring, and VC’s Joe Caramagna’s lettering provided us with high-quality illustrations worthy of the film franchise. The dark black shading on Vader’s suit are complemented beautifully by the fiery reds of Mustafar’s landscapes. What’s more, the lettering fits in well with each panel, using fonts of similar style to their surroundings.

Who do you think the mysterious voice belongs to? Let us know in the comments below!