Humans just can’t stop screwing each other over in Undiscovered Country #2, out this week from Image Comics.

Undiscovered Country is a new extremely original idea from the minds of Scott Snyder and Charles Soule, and if you’re looking for two better guys in comics you’d be hard pressed to find them. Oftentimes you hear that you should never meet your heroes, and while there are some artists out there that have left a sour taste in my mouth and pretty much ruined my fandom for them, Snyder and Soule are the antithesis of that. If you have a chance to meet them or talk to them, I recommend you take it.

Art for this issue comes from Giuseppe Camuncoli and Daniele Orlandini. Undiscovered Country is filled with insane fantastical things, and the world designs have Luke Skywalker blasting womprats on Tatooine vibes, with an almost steam punk technology. I can’t think of many comic book characters with extensive tattoos until this book. It seems like adding tattoos would be a ton of extra work which is most likely why I can’t think of any characters like that except for another new title called The Marked. There are also some character design sketches in the back of the book giving the readers a more in depth look at the process.

The color blending is magnificent. Where some styles let the colors changes create their own lines, the realistic blending Matt Wilson uses helps make this world real. It’s hard to keep your face from showing how stressed you are and we see the flushed red faces here. Less realistic styles can take a little longer for the reader to be able to immerse themselves into that universe, but Undiscovered Country feels like looking out the window.

Crank! always uses appropriate lettering for the story being told. Nothing too extravagant in this issue, just plenty of backstabbing and double crossing. The Destiny Man’s speech has serious Joker vibes as the words are quivering and unsound. This makes it pretty obvious which characters have evil intentions.

Undiscovered Country also uses a storytelling device that I love from the Watchmen. At the end of each issue there are small excerpts from in universe writings and publications. In this issue there are some quotes from a history book giving readers a small taste of this United States leading up to the events in the story. Taking the extra effort to make this world as real as possible shows me that this is a story the team really cares about.

There are some books out there with errors all over the place **cough Spawn cough**, and it just makes the editors and everyone working on the book seem lazy to me. I have a hard time justifying spending my money on stories that I don’t feel the creative team is invested in. Mistakes happen and we’re all human, and you can’t make everyone like your story, but you can proofread your own story and spell words correctly. If you don’t care enough to read your own book than why should I? 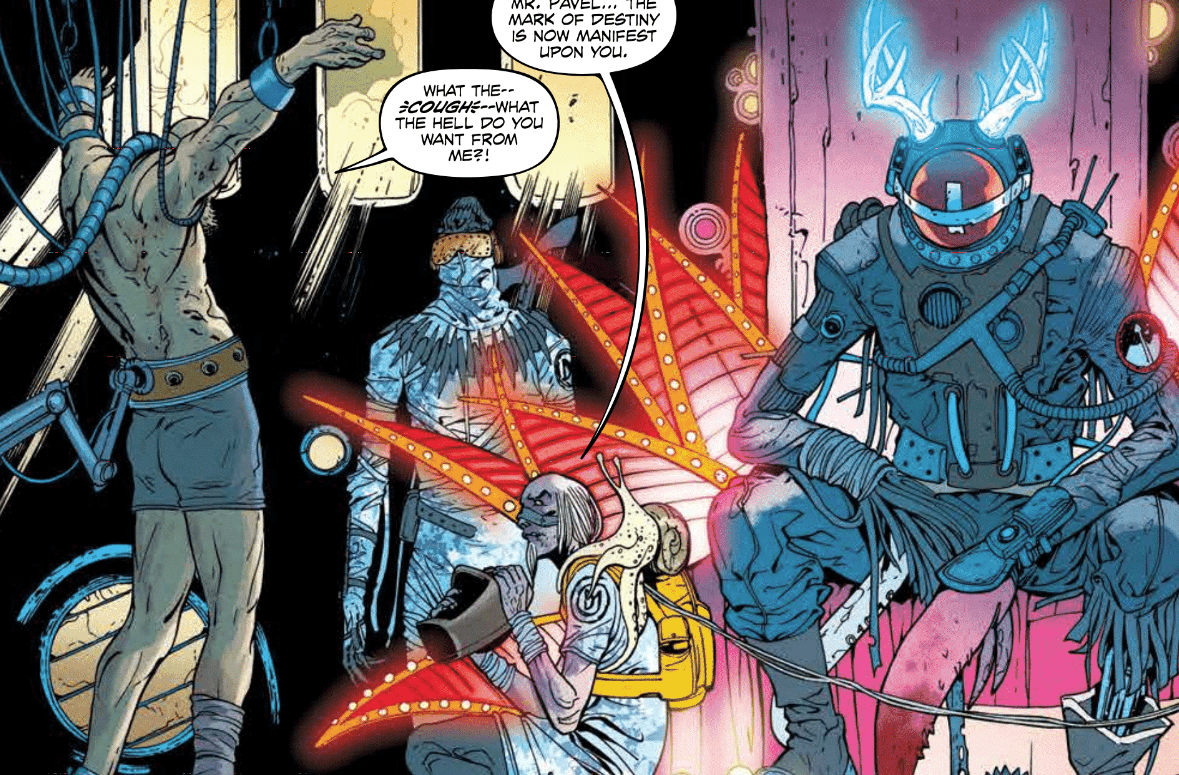 Undiscovered Country goes above and beyond what most creators do. Writers like Jonathan Hickman with his charts and Kieron Gillen creating a game out of Die have taken back matter to a new level. Learning about the world outside of the main narrative creates a more extensive universe that can be built upon for many years to come. Some people might just see a funny quote about Episode XII, but a TV producer sees spin-offs, product placement, and more seasons.

A universe with plenty of history and loads of untold stories is just a literal gold mine for any production company in the age of streaming services. Just look at The Walking Dead and everything that has spawned from Kirkman’s creation. I firmly believe he ended the comic after the death of Rick so he could save any other ideas for the TV shows and other properties.

The possibilities are endless for Undiscovered Country, and my favorite aspect of this issue was the mention of popular music and movies from this fictional version of the United States. It would be extremely fun just thinking of all the different bands reuniting, movie sequels, and property crossovers that would happen. Perhaps they actually do a Home Alone remake and use 40 year old Macaulay Culkin in the same role? Of all the terrible sequels and remakes, I would actually pay to see that one.

With the success of The Mandalorian, Undiscovered Country couldn’t have been released at a better time. Westerns were lacking a little something and I think it was sledsharks and Baby Yodas.

What did you think of Undiscovered Country #2? Do you like the universe they are building or is it too off-the-wall for you? Let us know in the comments below?