Review: Tim Questions His Identity In BOOKS OF MAGIC #16

BOOKS OF MAGIC #16, available in stores Wednesday, January 22nd, brings back the future version of Timothy Hunter, and his intentions appear to be far from innocent. After showing the younger boy a little taste of his true magical potential last issue, the future counterpart returns with the intent to show him why he should reject the rules of his guardians, such as Ms. Rose. But Celia Culpepper, a detective from the Other Side, has caught wind of Tim’s unauthorized use of magical trespassing and wants Rose to find him.

Tim believes he’s in a good place now; his father is safe, the Cold Flame isn’t threatening him anymore, and his future double is showing him a whole new world of magical possibilities. He’s been told they’ve placed limits on his power. Now Future Tim is claiming that group believes they can limit his sense of right and wrong as well.

Our hero finds himself at a crossroads–Does he believe what Future Tim said about these limits? Does he really know what being “good” even means?

Writer Kat Howard portrays Tim’s existential crisis well. Using the tools of magic and fantasy, she illustrates a search for identity in a relatable way. Readers can resonate with doubts about their true “goodness” and questions of who they really want to be in this life.

While this is going on, Culpepper commands Rose to join her in the search for Tim. The seasoned detective plans to have him tried for his magical lawbreaking; will Tim be caught before he can find the answers posed by his future self? 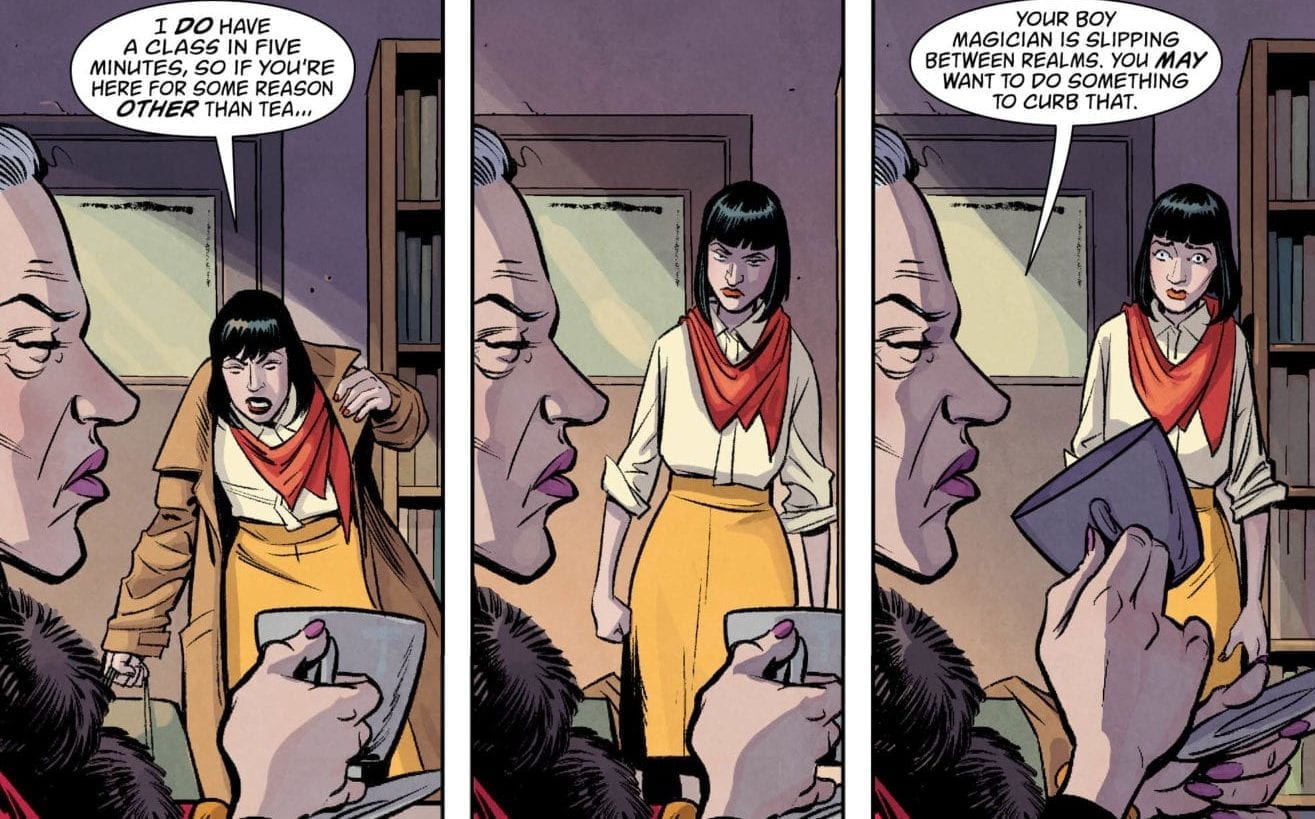 Tom Fowler’s penciling, Brian Churilla’s ink work, Jordan Boyd and Marissa Louise’s coloring, and Todd Klein’s lettering work harmoniously together throughout this issue. As the scenes transition from Tim’s present and the past remembered, the lines and shading become less solid and defined. We also see a clever use of brighter colors on our hero to distinguish him from the more bland background hues, as if he’s the one bright spot in a world of darkness. The lettering pairs well with the story’s rather chaotic elements by allowing  boxes to flow alongside the actions.

Kai Carpenter’s Cover art features Detective…. with an inquisitive look on her face. This reminds readers of the everpresent watchful eyes aware of Tim’s magical jaunts.

BOOKS OF MAGIC #16 keeps readers on their toes with both the intrigue of Future Tim and the threat of Culpepper. The story is well written, and is clearing building up the narrative into something exciting.

Do you think Tim will ? Let us know in the comments below!

Review: Tim Questions His Identity In BOOKS OF MAGIC #16Writer Kat Howard portrays Tim's existential crisis well. Using the tools of magic and fantasy, she illustrates a search for identity in a relatable way. Readers can resonate with doubts about their true "goodness" and questions of who they really want to be in this life.