Review: THE WHITE TREES #1 Is A Fantastic New Age Fantasy

Image Comic’s newest mini-series The White Trees #1 hits your local comic shop on August 14, when asked what this series is about White Trees artist Kris Anka said it best, “This book has everything: action, suspense, romance, Daddies.” If that doesn’t sell it, then this review will with The White Trees #1 quickly transporting you into its world promptly grabbing your interest with driven characters sent on a quest for loved ones.

Before we talk of the story (Spoiler Free of course) lets go over one of the best things a creator can add to his or her product; an extra behind the scenes look or items that expand the story for the reader. White Trees #1 has these bonuses in the form of character sketches and one of the best editions: a map. To some a map may not mean much, but whenever one is added it helps the reader become invested in the world by giving them the knowledge of where certain places are located. That’s what a map is by definition and when added shows just how much work the creators put into their world building.

Within the first few pages of The White Trees #1 (from here on out, White Trees) writer Chip Zdarsky introduces us to the world of Blacksand by having our three main characters called upon by their king who informs them of their missing children. In each character introduction we learn much without the need of exposition, just interactions between the three. White Trees wastes no time in it’s flow of story beats with each conversation adding information to the characters or the world they inhabit.

This is due to Zdarsky packing motivations and glimpses of history between each character in every scene. This method of world building could easily unfold and make a story messy, or give the feeling of exposition, but White Trees never feels like too much. It helps that it’s an 40 page ‘oversized’ issue due to it being only a two issue Mini-Series. 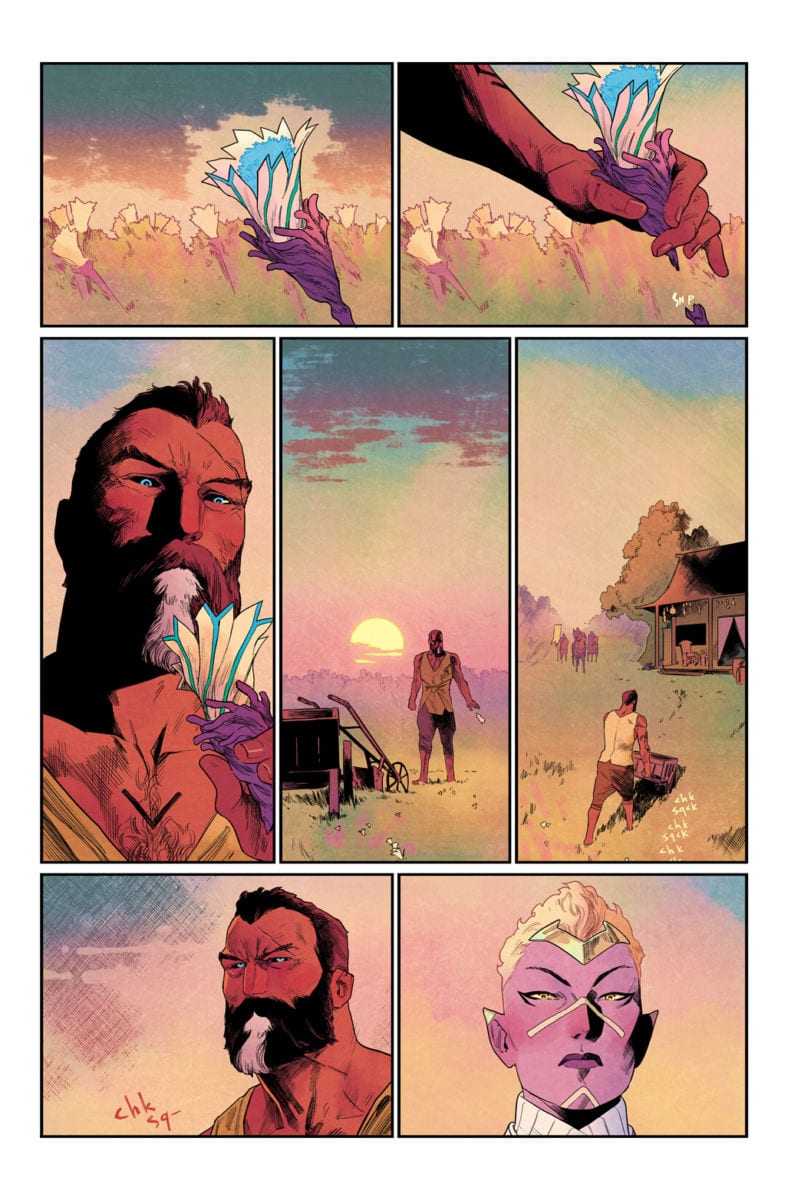 With our cast of three on their search for clues we meet friends, lovers of the past, and other creatures of Blacksand. Throughout the beautiful fantasy landscape our character’s speak often (beside Krylos) with each other of the war from twenty years past. With very little action White Trees relies heavily on its characters by diving deep with great dynamics and depth. In these interactions you can feel their pain, motivation, and history they share.

Our main cast are the fantasy classes you would find in a game with Krylos being the DPS (even though he stopped being violent), Dahvlan as the Tank and Scotiar as a Range. Zdarsky plays with a multitude of fantasy tropes in White Trees but never makes them feel stale.

Without going into spoilers Krylos often feels like 2018’s Kratos from God Of War. That isn’t a bad thing per se, more of an observation. Even comparing the two names they are nearly identical. Our first introduction of Krylos is of a peaceful farmer picking a flower from the field. In this scene alone we learn much about the character even with the lack of dialogue due to the great art of Kris Anka. Throughout White Tree #1 we have a fantastic written story with pencils and colors that equally match that quality.

No matter if it’s a mountain landscape, sprawling city, or a little town on the coast Anka draws panels that could tell a story without dialogue. When characters emote you can clearly see their feelings worn upon their faces. In some instance Anke goes with a blank background (akin to manga) to greatly express said emotions. 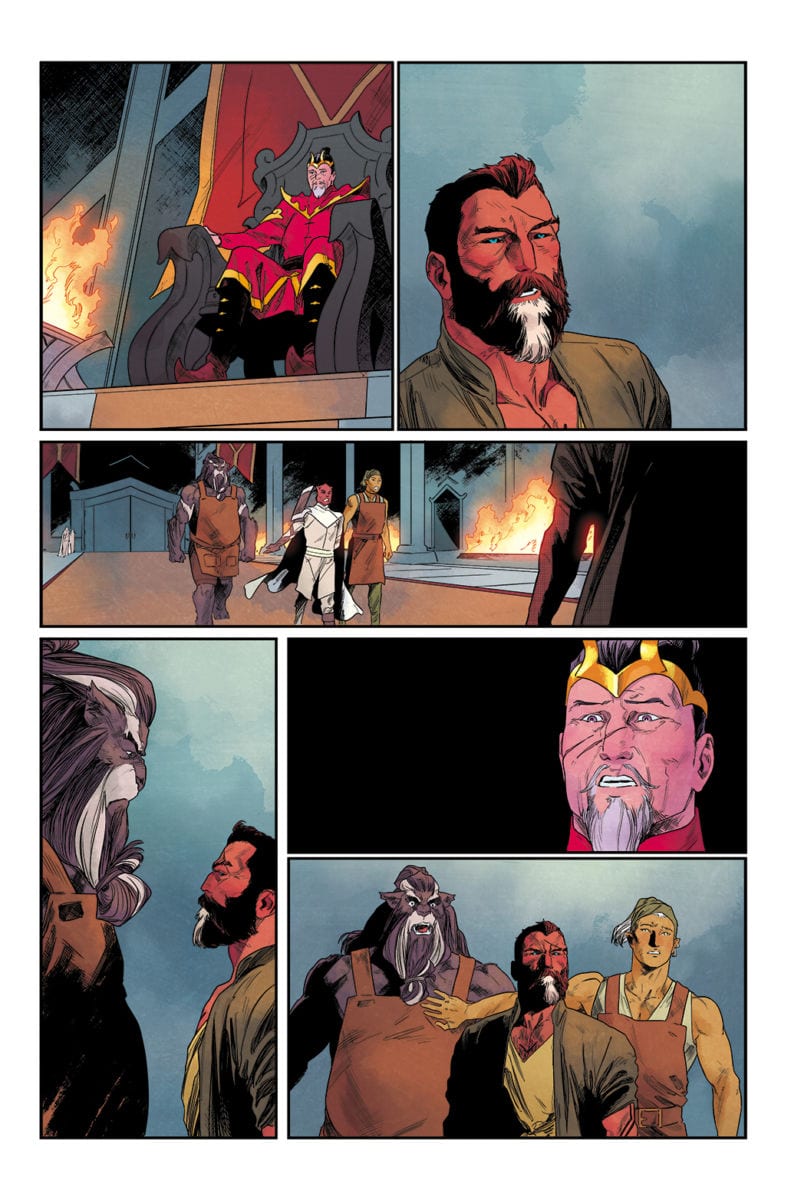 In other panels the background is busy teaming with life making White Trees world feel alive. Anke doesn’t use panels in complex ways keeping it with the usual boxes and not doing anything crazy, but this works out wonderfully by not taking too much away from the characters or plot. Working in perfect conjunction to the art is Matt Wilson’s gorgeous colors. With the ability to illuminate certain moments, then dampen the mood with darker tones of colors or shadows Wilson’s colors stand out just as much as the others hard work.

Towards the end of the issue there are a few pages with dreamlike colors that stand out brightly to the point you may need sunglasses. While the campfire our characters build dances around mesmerizingly, constantly reminding us that the world of White Trees is fantasy based with it’s vivid colors mixed with some gritty grays and browns.

With a perfect blend of plot, characters, art and colors White Trees #1 knocks it out of the park in a world full of fantastic fantasy stories.

In a year filled to the brim of great comics and storytelling The White Trees #1 shines brightly. Plus it has a map, who doesn’t love maps?Review: THE WHITE TREES #1 Is A Fantastic New Age Fantasy