It’s possible The Walking Dead just began its primary assault. This entire season has been built around Rick finding the courage to rise up against Negan. There have been some good episodes, fleshing out the characters more. However, a lot of it has been meandering, merely hinting at conflict. This is an episode that actually starts to turn the tables. “The Other Side” is, quite literally, the other side of the table.

Sasha and Rosita are the powerhouse stars of “The Other Side.” The Walking Dead has kept Sasha as more of a quiet soldier, working behind the scenes. Rosita, meanwhile, has been struggling with Abraham’s death since the season began. While every other character may have pussy-footed around the Saviors, Rosita finally knew it was time to act. To make it even better, Rosita brings Sasha along for the ride. What follows is a great action duo, squabbling while fighting off the undead. It’s the same formula that made “Say Yes” such a good episode. 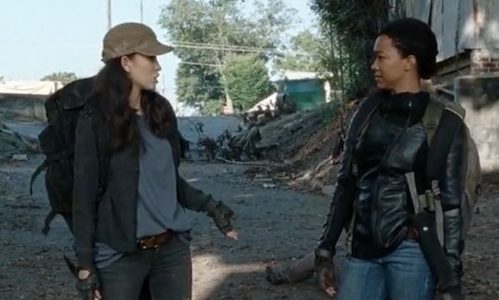 Granted, it’s not as jam-packed with action as other episodes have been. But it’s action that directly pushes the plot forward, inciting war with Negan. There’s also some nice time spent developing the relationship between these two women. Their relationship has, for the most part, been based on their separate relationships with Abraham. Now, the two get serious bonding time, and while it’s still based around Abraham, it’s more about them. He merely serves as the vehicle for an episode, with equal parts plot and character development.

The other characters in the episode mostly stick to routine. The Walking Dead only lets characters evolve in solo episodes. Daryl and Maggie have a crying scene together, as the Saviors inspect The Hilltop. It feels awfully forced, but it’s only a quick beat. What’s more interesting is how Daryl goes to meet up with Rosita, giving the team more muscle. Eugene may be a Neganite now, but he’s still defined by his big words and cowardice.

What’s annoying is how close we get to Gregory evolving. Gregory has been little more than a conniving coward since his introduction. Character consistency makes sense, but evolution is important. If anything were to change his character, it seemed like it would be Dr. Carson leaving. The moment between Gregory and Simon hinted at tension, but it appears that was all for naught. It seems like an oddly dropped thread, but perhaps it will be picked up again soon.

“The Other Side” isn’t quite as strong as “Say Yes.” However, both episodes work for the same reasons. It’s a strong piece of character examination, complete with action on the side. It’s also the potential boiling point the show has needed since Negan appeared.

(Also, I don’t know if this is something that truly warrants a discussion. But since many outlets have been reporting this, it seems necessary to bring up. The Walking Dead revealed that Jesus is homosexual. Jesus is among several homosexual characters, including Tara, Aaron, and Denise. This isn’t a big deal – or at least, it shouldn’t be. Some people are gay, some people aren’t. Jesus is gay. End of story.)