Everyone’s favorite time-traveling headhunters Hazel & Cha Cha hit the road once again to eliminate a rogue time-agent around Christmas time in the early 1980’s. Unbeknownst to them, their new directive is going to take the pair straight into the path of a plot to upset the balance of Christmas for all time. The legend of Santa Claus is about to get a lot more complicated. 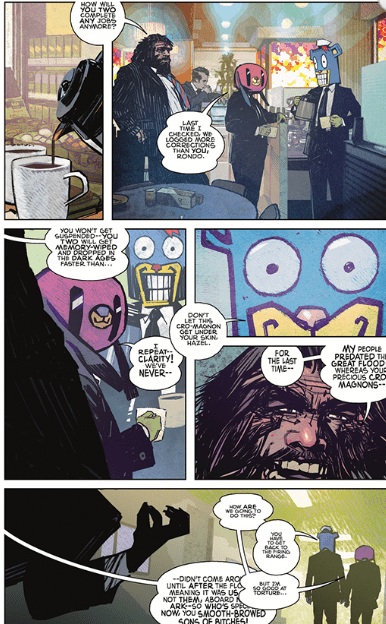 Gerard Way‘s writing is known for being intelligently bonkers yet also tightly constructed, as can be seen in his work on Doom Patrol and the main Umbrella Academy series. Which is why it’s so strange that the writing in this one-shot is such a mixed bag. Dark Horse editor Scott Allie is credited as co-writer, so it’s unclear how much of a hand he had in the construction of the plot. Regardless, this Christmas special has a B-plot that, while certainly an original take on the whole Santa myth, is given almost nothing by way of character. The subplot follows Pete, a high-school loser with a poor family who has to take his kid brother around town. As the story progresses, Pete uncovers some sinister clues about Santa and Christmas just by random interactions with bystanders. Pete himself is a pretty bland window character for the audience, and the plot is constructed in a way that makes it feel cobbled together. It really only serves as a reason for Hazel and Cha Cha to coincide with this other strange happening and make it a Christmas issue.

Fortunately, Hazel and Cha Cha’s dialogue is absolutely superb. The pair’s banter regarding subjects that have nothing to do with their current situation is the true highlight of the whole story, as it’s endlessly hilarious. Way has always had a penchant for this manner of dialogue writing, and he’s in top form for these two characters specifically. 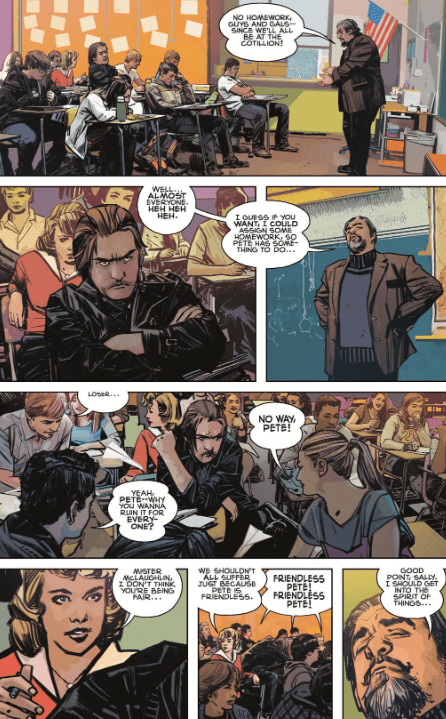 The world of such off-kilter comics as The Umbrella Academy requires an especially unique artistic touch. Fortunately, Mother Panic co-creator Tommy Lee Edwards was on hand to deliver his talents to Gabriel Ba‘s usual territory. Edwards’ brand of grime-stained pop-art and realistic detail is always a pleasure to behold, and the same goes for this issue. The sort of low-color gradient combined with the thick line work gives this one shot its strange and dirty atmosphere. There’s a great eye for detail here as well, and characters have suitably drawn facial features and the settings all look realistically used. It’s basically the 1980’s small town aesthetic without the vaporwave and neon. The coloring on Hazel and Cha Cha themselves has this scratchy finish to it, as if a file were taken over the finished product. It works as a sort of visual reminder that the pair don’t really belong in this world, and that they’re just passing through this specific time. Also, Edwards’ drawing of the masks Hazel and Cha Cha wear is suitably unnerving and also obviously funny. It’s hard to put a finger on why these absurd masks is so effective, but half of the joy in watching their interactions is because of these masks. So of course, Edwards nails them. 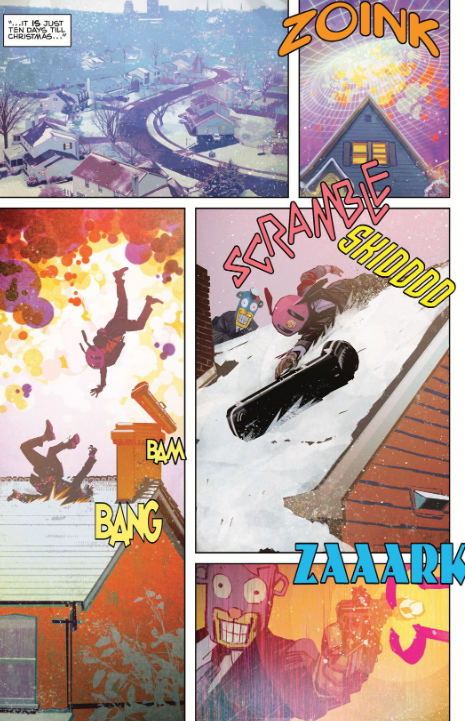 “The Umbrella Academy: Hazel and Cha Cha Save Christmas” is an exceptionally well drawn and often hilarious Christmas special of an issue. Unfortunately, the experience is damaged by a lackluster subplot with little to no character in itself. Any page with Hazel and Cha Cha on it is guaranteed to be hilariously entertaining. It’s those pages without the titular pair that prove to be this issue’s greatest weakness. Overall, if you’re ready to get into the Christmas spirit by way of mask-clad time agents shooting their way through the 1980’s and can withstand some messy B-plot time, this is an issue for you. Pick it up on 11/20 from your local comic shop.

While the presentation of the story is a bit clunky, Way and Edwards still manage to bring on a weird and unique Christmas tale in the Umbrella Academy universe.Review: THE UMBRELLA ACADEMY: HAZEL & CHA CHA SAVE CHRISTMAS