Review: THE SWAMP THING #5 is a Psychedelic Callback

DC Comics’ The Swamp Thing continues to experiment with its content. This series has consistently been an innovative one. Yet it also borrows generously from comics of the past to create its fresh tone. The Swamp Thing #5, which reads much like a one-shot, sees this creative team influenced by the comics of Grant Morrison. Writer Ram V, artist John McCrea, colorist Mike Spicer, and letterer Aditya Bidikar deliver a psychedelic chapter that echoes some of the strangest moments in comics’ history.

V really does seem to be deliberately writing in Grant Morrison’s style. Morrison, who had their own run on Swamp Thing, was also behind such masterpieces as Doom Patrol and Animal Man. But they are often known for not making logical sense in their comics. Morrison presents villains like Mr. Nobody, gives us stakes too huge to comprehend, and writes monologues that are delightfully nonsensical. Morrison often doesn’t seem to want to make sense. They want you to feel something.

The same can be said of The Swamp Thing #5. On the surface, there is some sense to it. There’s a bomb beneath a block in London and Swamp Thing is here to get rid of it. But quickly, things get strange. Magic, dreamscapes, and metaphors make things a little unclear for the reader. And while there is an emotional sense to it, even a metaphorical one, V occasionally distrusts his own writing. He dwells on the stranger parts of his plot, seemingly trying to explain the metaphysical nature of what he’s doing through some of the dialogue. Characters untangle things for us, in lines that don’t always feel natural. But this issue already works, no explanation is needed. V brings us a story that is rooted in nightmares of our world dying. A dream many of us are all too familiar with. 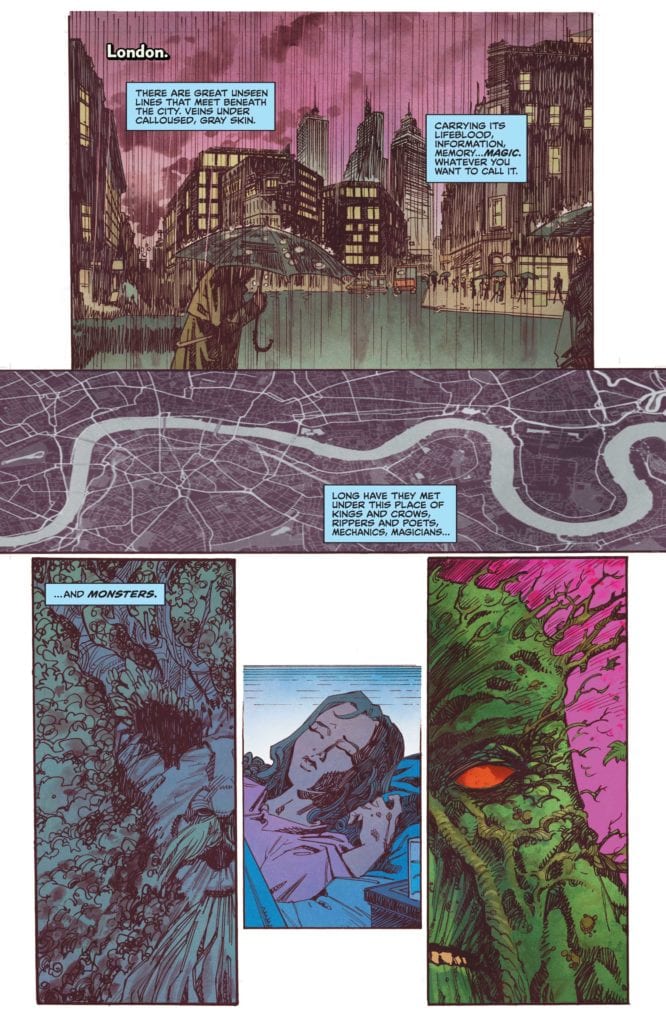 Regular artist Mike Perkins takes some time off in this issue, allowing artist John McCrea to step in. While Perkins’ art style is gorgeous, something I harp on often, this feels like the perfect issue for McCrea to fill in. The ethereal, metaphorical nature of the plot lends itself perfectly to McCrea’s twisting style. McCrea’s figures aren’t quite cartoony, but they’re not the realistic proportions we see in Perkins’ art either. Swamp Thing looks stretched out, emphasizing his giant stature. This whole issue feels like we’re dreaming about these characters. We’re not seeing the characters as they really are, but their physicality is beginning to match their personalities. So in a way, we’re seeing them in a truer form. Yet, as the danger passes, the last few pages feel like the calm after the storm. Reality seeps back in. The characters look proportional and realistic. It’s a subtle but brilliant change.

Spicer’s colors jump right off the page in this chapter. They’re what gives this issue much of its psychedelic tone. Many of the panels have a pinkish-purplish haze to them. These hues blend seamlessly into reds and yellows. Swamp Thing, himself, sticks out in his vibrant green. But all of it feels like the colors of dreams. And in the midst of this, Spicer colors one reoccurring panel differently each time it comes up. We see what looks like the streets of London in a pale blue. When the image comes back, it looks like plant cells and chlorophyll, colored in a brilliant green. And later, it appears red, like arteries pumping blood through the body. It’s generally the same image, the pencils stay the same, but Spicer’s color gives it new meaning with each iteration. 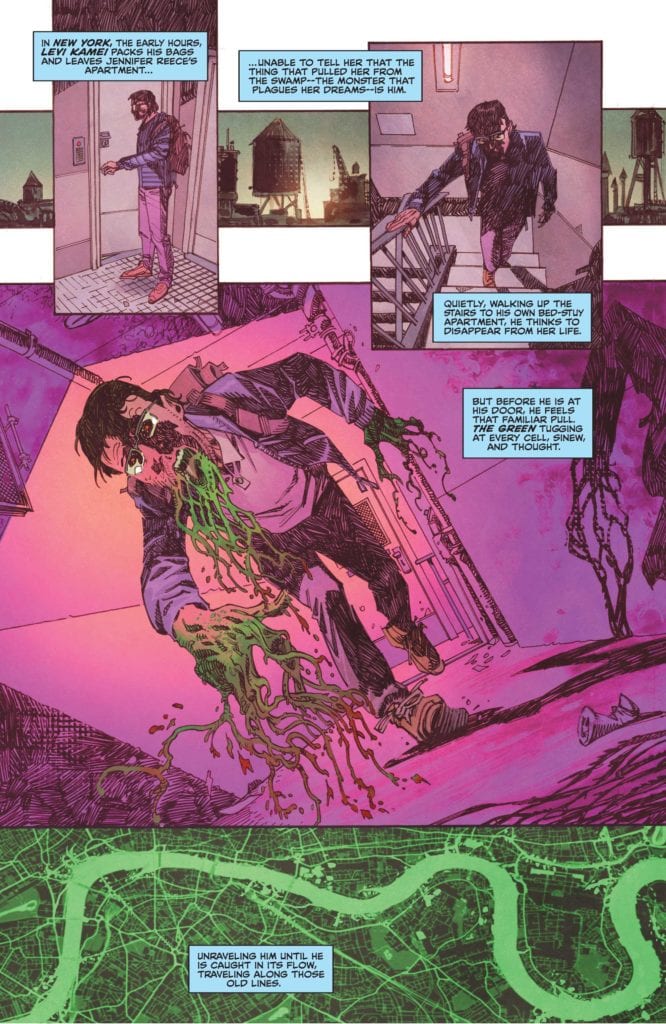 Two of the guest characters in this issue clearly have a history together: Sierra Kirre, a woman who is caught in the middle of this whole mess, and John Constantine, magic man and scoundrel. It generally goes without saying that if Constantine has a history with anyone, they probably hate him. And while V’s writing hints at this, Bidikar’s lettering actually does a lot for their dynamic. Sierra’s words balloons often almost seem allergic to John’s. If his words are shown at the top of the panel, hers dive low, creating a large expanse between them. It gives us a sense of Sierra’s distaste for John. And what’s just as telling, is that the few moments their word balloons collide, she’s often telling him off. A “Sshhh,” or a “Already on it,” bump into what John is saying. She’s fast to shut him up, but slow to show any kind of familiarity or closeness.

DC Comics’ The Swamp Thing is an incredible series. At times it channels Alan Moore, other times it channels Grant Morrison. But in all of it, this creative team is producing a brilliant, fresh work. It’s a patchwork of what’s come before, in some ways. Yet it has just as much new, exciting things as it does homages and callbacks. The Swamp Thing #5 is out from DC Comics July 6th at a comic shop near you! Pick it up and buckle in for a wild ride.

DC Comics' THE SWAMP THING is an incredible series. At times it channels Alan Moore, other times it channels Grant Morrison. But in all of it, this creative team is producing a brilliant, fresh work. It's a patchwork of what's come before, in some ways. Yet it has just as much new, exciting things as it does homages and callbacks. Review: THE SWAMP THING #5 is a Psychedelic Callback