Review: THE SWAMP THING #1… Now THAT’S How You Start a Series!

We live in exciting times. On the heels of DC Comics’ Future State, many creative teams are creating series that lead up to Future State’s events. The Swamp Thing is one of those series. Writer Ram V, artist Mike Perkins, colorist Mike Spicer, and letterer Aditya Bidikar are playing with our expectations in this issue. They are filling these pages with doom and gloom. But their characters, all new to the Swamp Thing mythos, read like old friends. They’re immediately familiar, full of life and plans for the future. So, even though we know we probably shouldn’t get invested in these doomed folks, this dastardly creative team gets us caring right off the bat. DC Comics’ The Swamp Thing #1 is the start of your next heartbreak. Minor spoilers ahead.

V doesn’t do much in terms of introducing our characters. Instead, he keeps us guessing. Levi, who it seems safe to assume is the protagonist, is returning from a trip home to India. He’s clearly recovering from whatever happened over there. But V doesn’t tell us what that was. He doesn’t give us Levi’s life story. V just puts Levi on a plane and fills his head with nightmares. It’s intoxicatingly mysterious. The only character V gives us details about is the Pale Wanderer. The Pale Wanderer is a being of legend. Characters at a crime scene swap ghost stories, building up the terror we feel that the Wanderer could be around any corner. When the Wanderer finally shows up, V does something that sends chills down the spine. He gives the creature a voice. This force of nature, that seems inhuman and ghostly, wants to chat.

In giving us lots of details about our antagonist, and keeping the cards close the vest about our protagonist, V ups the stakes. If Levi, whoever he is, ends up facing off with the Pale Wanderer, will he make it out alright? The answer: we don’t know. But knowing so little about Levi makes him a puzzle we want to solve. Though, occasionally, V does slip into exposition mode. Jessica, Levi’s friend, tells Levi why he was sent back to India. It feels like dialogue that’s aimed at the reader, not Levi. Levi knows why he went home. But V still obscures so many of the details of this story. And he’s setting up a cast of characters who soliloquize and share their hearts with one another. That’s just who they are. It’s the tone V is creating. In the midst of mystery, these characters have their hearts on their sleeves. 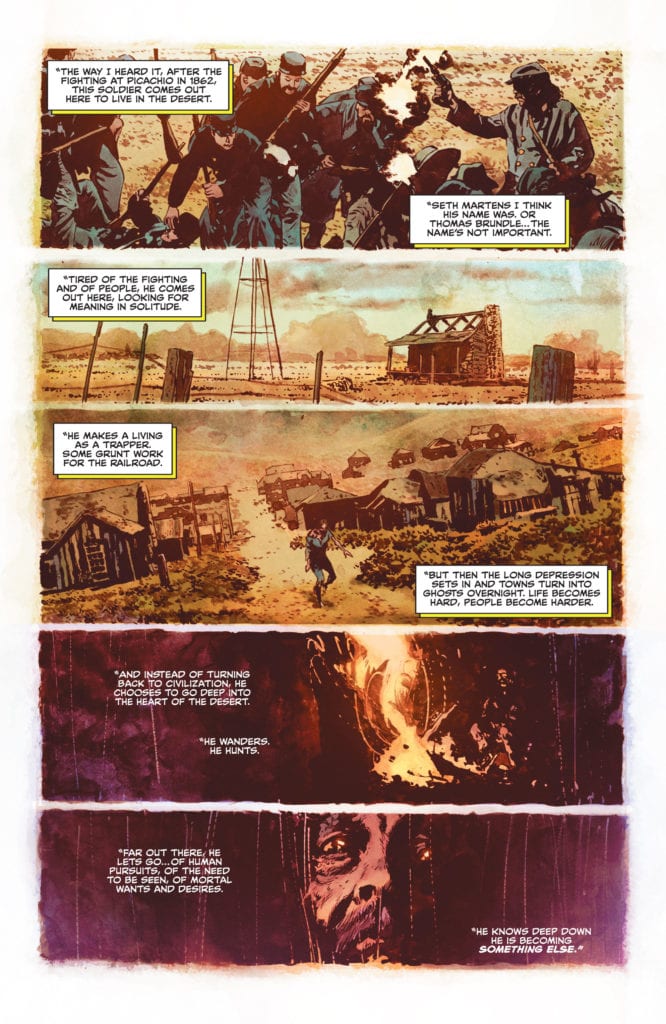 Perkins is just as much of a culprit when it comes to hiding the answers. In Levi’s flashbacks, Perkins makes us feel as though we’re caught between important details. The long, slender panels feel like half a picture. We see angry faces, crowds gathering, but we don’t get to see why. It’s infuriating and exciting, all at once. Perkins never lets us think, however, that he doesn’t know the answers. Every panel feels haunted by a deeper knowledge. It almost reads like Perkins is drawing these pages with a heavy heart. He knows the chaos he’s drawing his characters into. As the plane Levi’s on passes through dark clouds, Perkins makes them look like tentacles trying to grab ahold of the plane. Even seemingly innocuous images of trees feel like omens of death and destruction.

This all culminates as Levi runs to the bathroom. Perkins twists the panels, making them look lopsided and warped. It’s hard not to feel ill looking at those panels. Perkins so brilliantly replicates the feeling of dizziness in these pages, that it’s best to read this comic sitting down. Every inch of this issue is terrifying but beautiful. Perkins will lure you in  to this story and then scare the crap out of you. 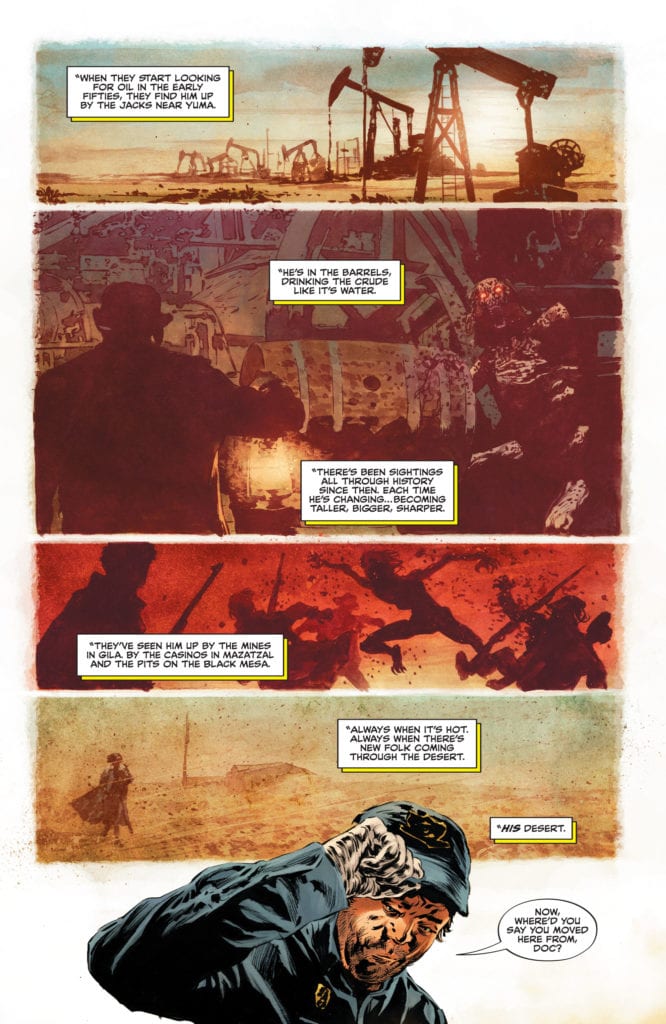 Spicer’s coloring is breathtaking. It pairs so perfectly with Perkins’ art to make everything feel both foreboding and gorgeous. It’s in these pages that Spicer reminds us that bloody corpses and beautiful sunsets are both red. And our history lesson about the Pale Wanderer looks faded from time. But Spicer also makes these moments feel faded for another reason. These aren’t just old memories. We’re watching the progression of a man losing his humanity. The only moment that looks vibrant and alive on those pages, is the deep red image of the Pale Wanderer making his way through a group of soldiers. Whenever Spicer has the opportunity to connect something awful with something awe inspiring, he does. Haunting memories are a gorgeous orange. Every moment of terror somehow makes us want to dive deeper into the horror.

Bidikar’s lettering is a tug of war between order and chaos. As we learn about the Pale Wanderer, some captions are given a text box and others are not. It’s the nonchalant captions that have clear boxes around them. These are the little bits and pieces that we’ll probably forget about soon enough. Little things like what the Pale Wanderer was doing before he became what he is. But it’s the captions that are just set against the page, with no border around them, that haunt the reader. “And instead of going back to civilization, he chooses to go deep into the hear of the desert,” one of these captions says. “He wanders, he hunts,” the next says. It’s a disconcerting idea. Why would someone choose to go out into the wilderness? It’s a dangerous caption. One that can’t be contained by text boxes or borders. With this small change in how they present the captions, Bidikar highlights the captions they don’t want us to forget. And we won’t.

DC Comics’ The Swamp Thing #1 is exactly how you should start a story. It’s full of mystery. It’s both deeply haunting and deeply beautiful. V, Perkins, Spicer and Bidikar are luring us into a dangerous new world. And though we may know, from Future State: Swamp Thing, where things are likely going, we’re glued to the page to see just how we get there. These characters feel like living, breathing human beings and the horror that faces them feels disturbingly enticing. Pick up The Swamp Thing #1, out from DC Comics March 2nd, at a comic shop near you. It’s the first issue of a surefire gamechanger.