Review: THE QUESTION: THE MANY DEATHS OF VIC SAGE #4 – DC’s Black Label At Its Best!

On August 25, DC Comics released the fourth and final issue of its Black Label series The Question: The Many Deaths of Vic Sage. Written by Jeff Lemire, with pencils from Denys Cowan, inks by Bill Sienkiewicz, colors by Christopher Sotomayor, and letters by Willie Schubert, issue four brings Vic face to face with the Thing with a Thousand Faces. Will Vic defeat evil itself, or is he doomed to keep fighting and losing the same battle again?

This issue opens simply enough, with Vic Sage returning to modern Hub City, now aware that he has lived and died many times, facing the same evil repeatedly. He returns to a city torn apart by police corruption and racial strife, which certainly reflects the current political climate. Lemire, Cowan, and company craft a complex tale about the nature of evil and injustice in society that I would say “speaks to the moment” if not for how ambiguous the ending is, like the protagonist’s namesake, is left without an “answer.”

Cowan, Sienkiewicz, and Sotomayor make a great team and have crafted a beautiful series. 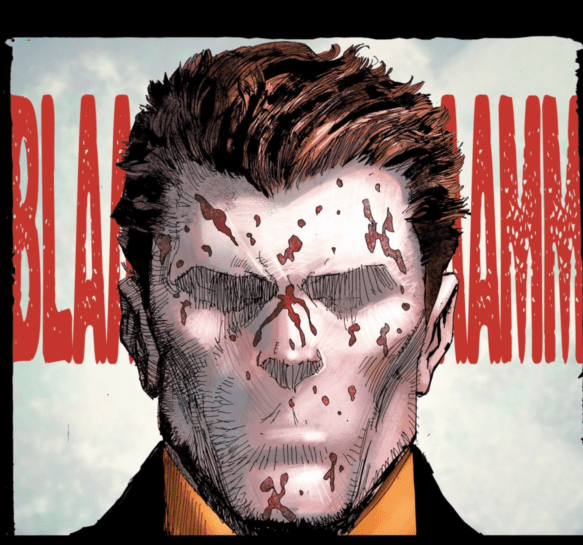 The panel above is one of the most beautifully drawn and colored panels in the book and is also a brutal moment in the story when Vic’s optimism about overcoming evil begins to waver as he fails to redeem the mayor (who kills himself) from the influence of the Thing with a Thousand Faces. Cowan and Sienkiewicz’s work is detailed with the lines and shading giving Question’s face a gritty texture, while Sotomayor’s colors, particularly the blood spatter and Vic’s hair, accentuate and bring out the details of the image. They are complemented in this panel by Schubert’s letters with his speckled, red “BLAM” behind Vic, and despite the Question’s expressionless face, Vic’s shock is palpable.

Lemire, Cowan, and company have crafted a complex tale about racism, injustice, and the nature of evil in the world, that offers its readers no simple answers or happily ever afters. This series shows the heights that the DC Black Label imprint can reach when creators are given free rein to tell complex stories with characters (other than Batman and Batman related properties!). Hopefully, the rumors about DC canceling its Black Label imprint (with the firing of its editor Mark Doyle) are untrue, and the publisher will continue allowing creators to play with its properties and tell unique stories with its characters for years to come.

What did you think of The Question: The Many Deaths of Vic Sage #4? What do you think of DC’s Black Label imprint? Tell us in the comments below!

Vic confronts the face(s) of evil and is left with more questions than answers by the end.Review: THE QUESTION: THE MANY DEATHS OF VIC SAGE #4 - DC's Black Label At Its Best!