Review: The Motives of a Madman in THE BUTCHER OF PARIS #3

Writer Stephanie Phillips returns with artist Dean Kotz in the third issue of historical-thriller “The Butcher of Paris.” This issue features more of the tight pacing and succinct dialogue in both the investigative and political discussions, while also ending on an intense cliffhanger that makes the wait for issue four murder in its own right.

Pieces of Dr. Marcel Petiot’s past are slowly exposed-revealing harrowing events and actions that peer into the mind of a madman. As the detectives begin an intense interrogation with the killer’s wife, the Nazi occupation progresses-and the fate of Paris is determined. 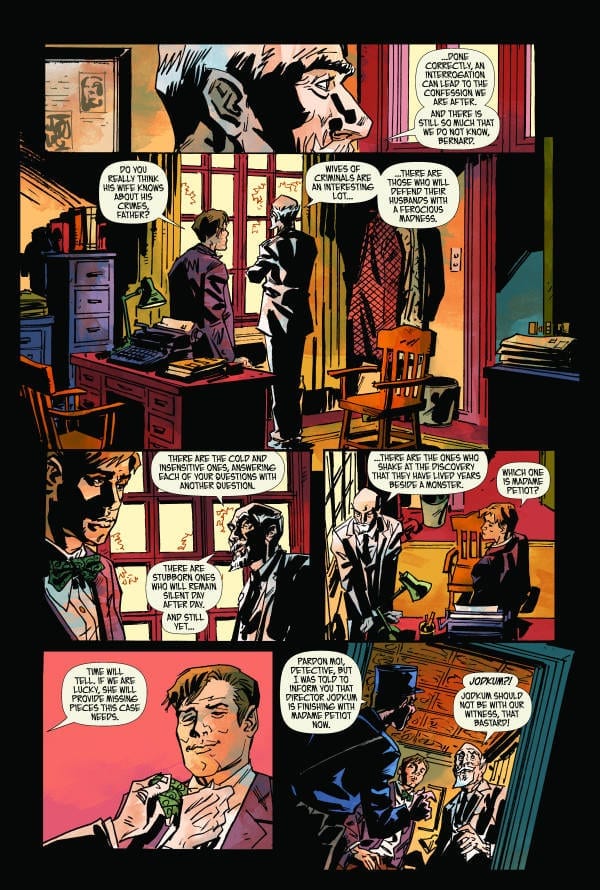 Stephanie Phillips’ scripts on “Butcher of Paris” are a consistent blend of crime procedural, political discussion and thriller. This trend continues here in stellar fashion. There’s a neat transition from an intriguing flashback to an interrogation sequence, and from there to a ballroom discussion of the Nazi’s waning power against the allies. It’s wildly impressive how no plot point ever seems out of place. The story’s direction remains clear and suspenseful, with the threat of Nazi occupation playing partial focus to the serial killer plot. Much of this tight plotting is due to Phillips’ ear for great dialogue. It manages to be both intelligent and naturalistic, even when wide swaths of words are being thrown around. This is a necessity in a story like this dealing with a cast of detectives and military officers, and also because there is no overhead narration. Every bit of storytelling is done through the art and the discussions between characters. What’s more, this issue ends with a brilliant (if not completely original) final scene that will drive tons of momentum into the next issue. 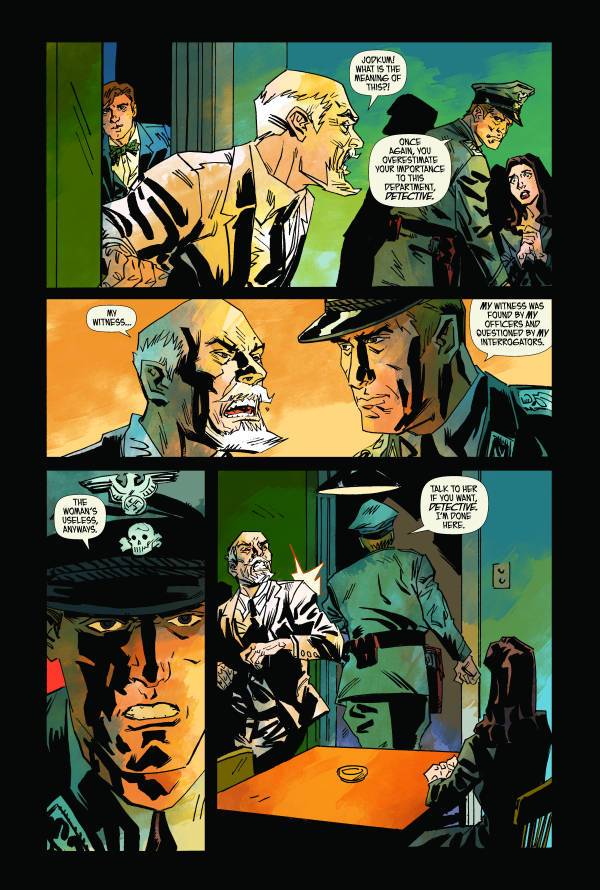 Speaking of art, Dean Kotz returns to lend his signature vision to “The Butcher of Paris,” and its a signature that just seems perfect for this kind of story. Again, there’s a sort of European graphic novel approach to his pencils that grounds it in reality while also elevating it artistically. Human characters are distinctly designed for familiarity. Facial expressions are carefully drawn, especially in the more subtle moments where every detail counts. The environment of 1940’s Paris is a mixture of realistically beautiful and appropriately haunting in the darker moments. The colors by Jason Wordie add unique hues to the atmosphere of the so-called “City of Lights.” There’s a sort of oxidization and rust aesthetic brought to the panels that somehow works with the tone of the story. Once again, this is a fantastic looking book with a completely appropriate style. 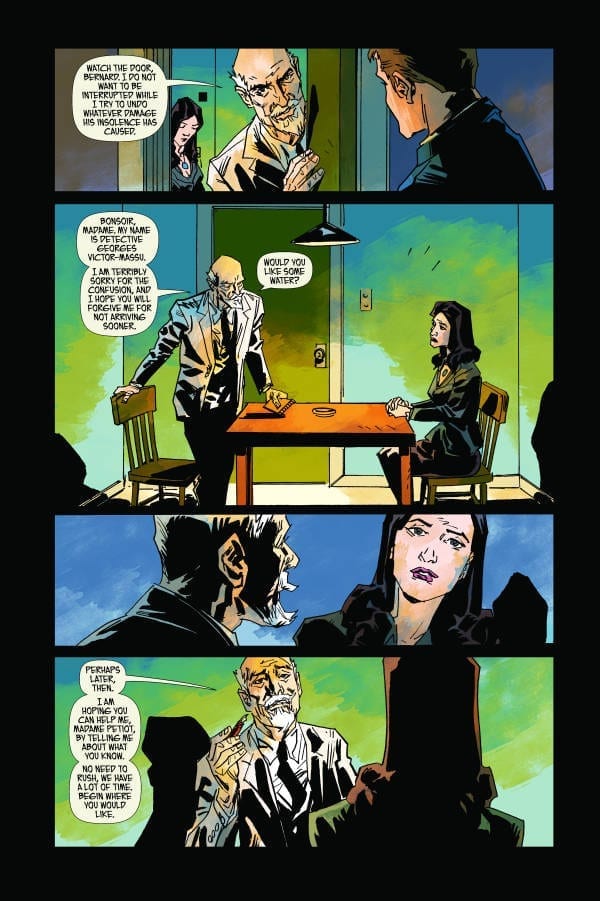 “The Butcher of Paris” #3 is yet another intelligent and entertaining chapter in this comic mini-series. Stephanie Phillips’ script is yet again full of intrigue both political and procedural. Dean Kotz and Jason Wordie’s artistic vision brings the city of Paris to a menacing life in this historical thriller. This is without a doubt one of the most engaging comic series currently running, and a must-read for any fans of this blend of genres.

Review: The Motives of a Madman in THE BUTCHER OF PARIS #3The most fascinating and suspenseful issue of "Butcher of Paris" thus far.