Review: THE MASK: I PLEDGE ALLEGIANCE TO THE MASK #1 Vows To “Make America Green Again”

The Mask, the zany anti-hero that’s been a fan favorite since his debut in 1987, is back in the limelight with THE MASK: I PLEDGE ALLEGIANCE TO THE MASK #1’s release Wednesday, October 16th. The series picks up almost two decades after the notorious figure known as “Big Head” disappeared, a period in which the city has somewhat recovered from the chaos. But the recent murder of two foster parents (who happen to be extremely abusive) has people talking about The Mask again. And in the midst of a highly contentious election season, it’s hard to believe the city will remain unscathed. 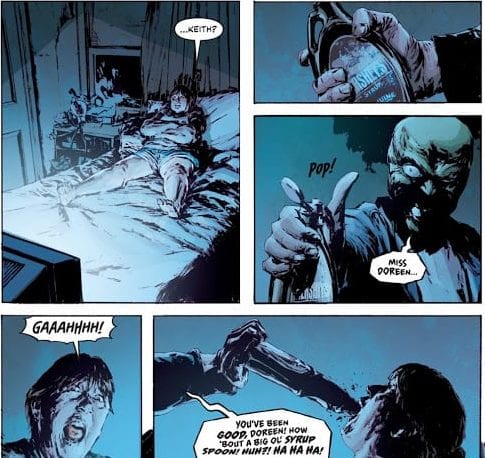 Mitch Kellaway, a detective lieutenant serving Edge City, has lived a largely unglamorous existence throughout his career. Routinely disgraced by his golf buddies and largely unrecognized by the police department, the man resorts to drinking for some reprieve. But Kellaway notices the news report saying one of the foster parents’ children describe the killer as having a “cabeza de verde,” which means “green head” in Spanish. Fending off a horde of bad memories from his past run-ins with The Mask, the detective races to find backup. 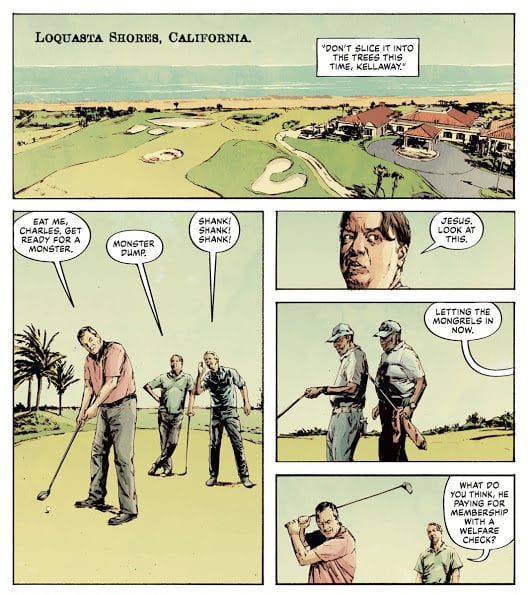 While Kellaway attempts to alert those who would help the city prepare for The Mask’s return, Mayor Kathy, the former girlfriend of Stanley Ipkiss (the mask’s previous wearer) charges ahead in her campaign in the U.S. presidential race. Unfortunately, a gigantic obstacle lays in her way. She must find a way to address the crumbling infrastructure of Edge City, deal with the recent reports of The Mask, and, most personal of all, face extortion from a tech billionaire who’s heavily invested in her election. He has dirt on her previous stint as The Mask and plans to implicate her in the recent murders unless she writes legislation to give him full access to user data on any technological platform.

Both of these storylines are set within a political climate filled with hate, distrust, and fear—much like our own.

Writer Christopher Cantwell brilliantly weaves together our modern, contentious, and crazy political climate into the equally zany antics of the THE MASK series. We see the effects the vigilante has on peoples’ lives—Kellaway, Kathy, and many more—and it proves Cantwell can bring multiple unique points of view into the storyline.

Patric Reynolds’ penciling, Lee Loughridge’s coloring, and Nate Piekos of Blambot’s lettering each capture the gritty style that marked this series’ heyday in the late eighties and early nineties. We see that the grit is much stronger nowadays, however, with little zaniness at this point in the narrative. The blood from The Mask’s murders looks real, and the font styles presented in the lettering bear witness to the terror each character experiences due to The Mask’s reappearance.

Reynolds’ cover artwork features The Mask hiding under an ordinary hoodie, surrounded by posters urging the public to vote for him. This illustration’s is straight to the point: The Mask has returned under our noses, and he’s moving into politics.

Rafael Albuquerque’s variant cover also depicts the titular character in a hoodie, only this time it’s covered with stars from the America flag. We also see that he’s holding a bag of cash, coupled with a backdrop of red and white stripes. The implication is that the notorious figure is planning to rob the country blind, both in terms of material goods and the values we hold dear.

THE MASK: I PLEDGE ALLEGIANCE TO THE MASK #1 is a promising political satire unlike we’ve ever seen. Marrying the already complex character of The Mask to our own world’s zany and cruel politics will speak to politically aware readers on multiple levels.

Do you like the political tones in this continuation of THE MASK series? Let us know in the comments below!