Review: THE LITTLE MERMAID Is A Perfect Series For Young Readers

Dark Horse Comics has partnered with Disney to produce a new line of comics featuring their classic titles including The Little Mermaid. Is an adaptation of a classic series everyone already knows unnecessary or is it a way of reaching a brand new demographic?

Experience the unforgettable tale of Disney’s The Little Mermaid through the first-person perspective of Ariel in this comic retelling. 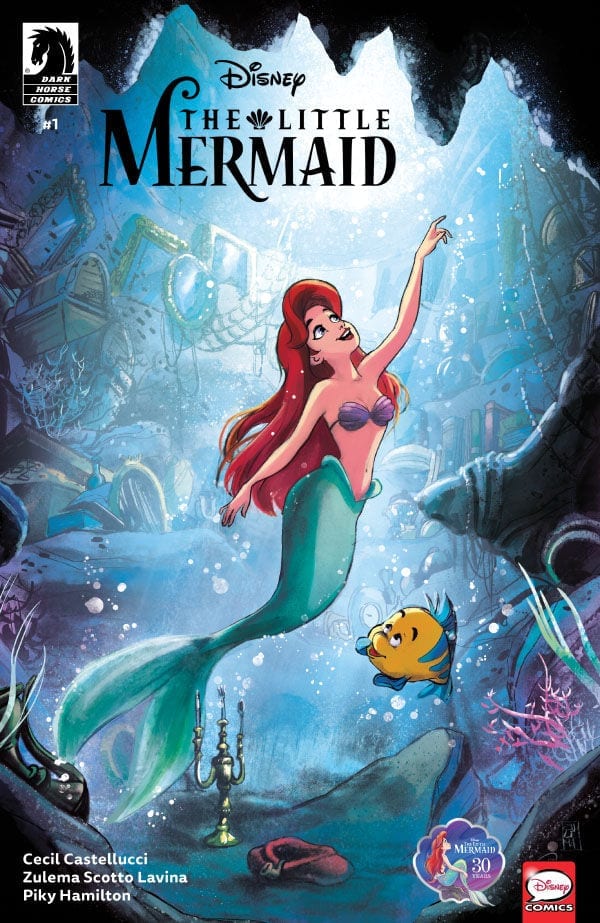 Thought the story is one many already know, there are always those who have yet to know the story of The Little Mermaid. This new comic series seems like a great way to reach a new demographic of readers by offering them a story and characters they recognize. Being able to give younger readers a book like this will help to keep their interest and help them to grow as readers.

Thought the story is familiar this doesn’t mean the writing by Cecil Castellucci is a simple transferring the film script to the comic. There is a shift in this comic to a first-person perspective allowing the reader to experience the internal dialogue of Ariel as she the adventure unfolds around her. This new viewpoint allows for a great way to look at the story from a familiar yet fresh look at the story. Castellucci does a fantastic job of capturing the character’s curiosity and mental struggle to find her place in the world.

The artwork by Zulema Scotto Lavina finds a way to perfectly capture the look and style of the original film. Special attention is paid to Ariel’s facial expressions especially looks of longing and inquiry as she explores the wonders of the human world.

Thanks to the coloring work by Piky Hamilton the book has a very impressive aesthetic. The book takes place under the sea and it feels like it the entire time. Through the attention to detail colorwork employed the comic is able to obtain an atmosphere similar to the movie.

The lettering by Richard Starkings comes into sharp focus thanks to thought boxes containing Ariel’s internal dialogue. This new feature is what makes the book worth picking up. Seeing Ariel’s mental struggle as she fights against Urusela and struggles to obtain Prince Eric’s heart will be even more applying thanks to employing this new detail.

The new The Little Mermaid comic from Dark Horse comics offers a recognizable story but has enough new material to warrant checking out. Though its only the first issue, as long as the rest of the series plays out at the level of quality than fans will have nothing to worry about. This will be an ideal graphic novel to give to young readers when the collection is finally released.

An amazing series for young readers featuring some very charming visuals. Review: THE LITTLE MERMAID Is A Perfect Series For Young Readers