Review: THE LEGEND OF KORRA: TURF WARS Library Edition – A Delightful Return to a Beloved World

There is no doubt that the world of Avatar: The Last Airbender is one of the most acclaimed and brilliant pieces of fiction crafted in the last 20 years. Both it and its follow up  The Legend of Korra are both rife with incredible character writing, resonant themes, heavy emotional stakes, and stacks upon stacks of lore. As such, continuing the story and legacy of one of the most beloved fictions in recent years via comics is a daunting task. However, it also makes perfect sense. What other medium would allow the freedom of storytelling and visual artistry that the comics medium does? The proof is in the end results, as  The Legend of Korra: Turf Wars, written by original series co-creator Michael Dante DiMartino and drawn by Irene Koh, is a wonderfully executed direct sequel to  Korra’s fourth and final book (season, for you newcomers). With plenty of well-orchestrated returns from fan-favorite characters, an intense plot full of mystery and tension, an emotionally satisfying love story, and breathtaking visuals, this complete Library Edition is the best way to experience the return to the world of the four bending nations and the one woman who can unite them all.

“After a refreshing sojourn in the Spirit World, Korra and Asami return to Republic City but find nothing but political hijinks and human vs. spirit conflict! Pompous developer Wonyong Keum plans to turn the new spirit portal into an amusement park, potentially severing an already tumultuous connection with the spirits. At the city’s edge, Zhu Li enlists everyone she can to aid the thousands of hungry and homeless evacuees who have relocated there. Meanwhile, the Triple Threats ruthless new leader, Tokuga, is determined to unite the other triads under his rule, no matter the cost.” 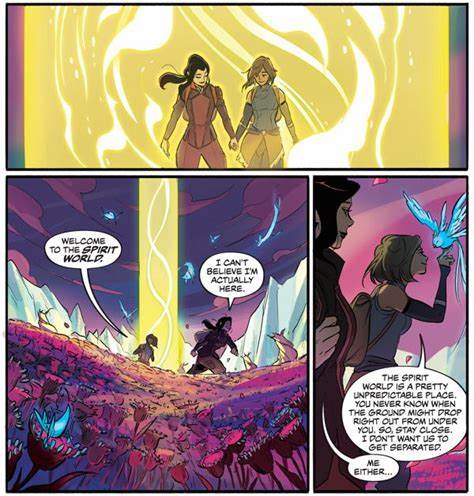 It would be difficult to imagine any Avatar story without the touch of the show’s original creative team (we saw the Shamalan film, right?), so it’s fortunate that Dark Horse reached out to Legend of Korra and The Last Airbender co-creator Micheal Dante DiMartino to craft a follow up to Korra’s animated adventures. With input from the show’s other lead creator Bryan Konietzko, DiMartino has written a highly entertaining and engaging sequel to the events of The Legend of Korra here in Turf Wars. This series starts right where Korra book 4 ended, with the newly coupled Korra and Asami taking a vacation in the spirit world following Team Avatar’s victory over Kuvira and the Earth Empire. One of the major criticisms of Korra’s finale was that the romantic pairing of Korra and Asami was a bit out of left field. Outside of (maybe) minor hints scattered throughout the later seasons, there wasn’t much build-up to them being romantically involved. DiMartino does a good job of advancing their relationship through a more believable lens, as the new couple goes through the opening growing pains of any new relationship topped with the intense situations of the world they live in. Korra and Asami’s relationship is legitimately the element I enjoyed most out of this comic, which is a credit to how much work DiMartino puts into fleshing out this new romance. The socio-political touches in Turf Wars are allowed to come away more cleanly than they did in the original series as well, since the comics medium has less of a censor stranglehold on it than major animation does. This being said, everything outside of the same-sex relationship material is handled in a simple and round-about manner, so don’t expect a gripping thesis on class issues and public vs. private property here.

The characterization of the show’s main cast is still absolutely on par with how they appeared in the animated series. Korra is still brash and hot-headed, Asami is still the smartest person in the room, Bolin is lovable, Mako is edgy and boring, and Zhu Li still does the things but now she’s in charge. Much like with the original series, I wish we got more time with Tenzin and his family, but overall the time we received with the cast was satisfying and felt like a natural continuation of the events in the show. Turf Wars really does feel like a small arc in a season of Legend of Korra, and most readers will feel right at home opening these pages. If there was one complaint I had to lodge against this arc, it would be that the main villain didn’t get quite enough time on the page. Tokuga’s kickass introduction is not only highly entertaining but also wildly intriguing for long time Avatar fans (no spoilers). Unfortunately, after this, he just becomes a cut and paste bad guy. Even with an early story life-altering event for him, he never goes past just being a power-hungry criminal. In all other regards, Dimartino and Konietzko have crafted a tautly paced sequel-series that has enough character focus, spiritual and political obstacles, and rad bending action to please the majority of Legend of Korra fans. 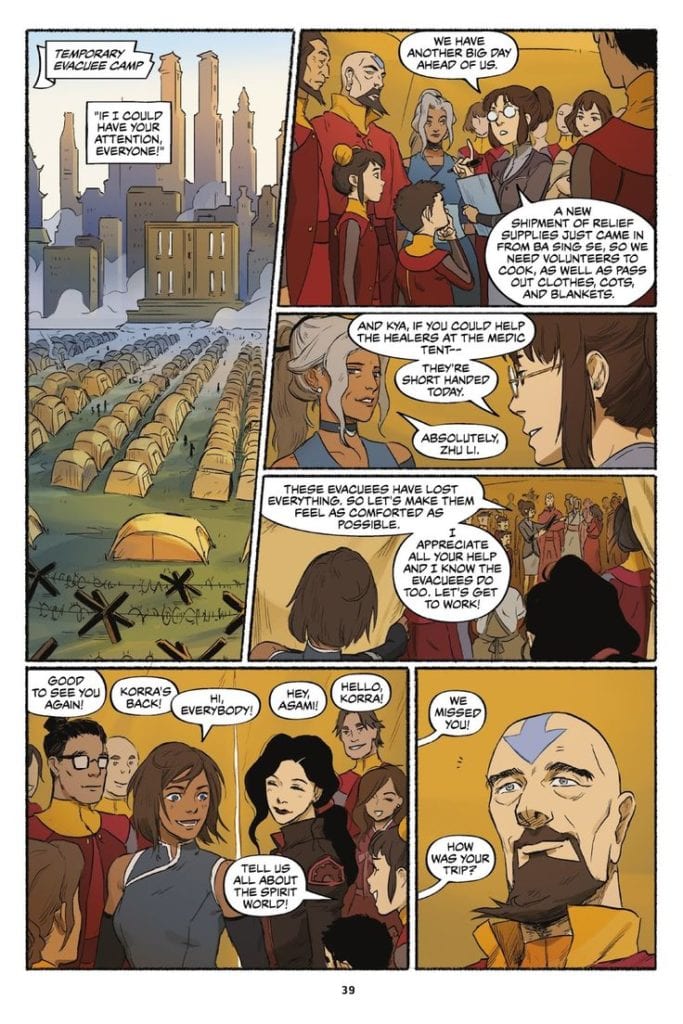 The now-iconic visual style of The Last Airbender and The Legend of Korra, with its anime and eastern-influenced animation and color, requires a team of significant talent to replicate onto the pages of a comic. Fortunately for Turf Wars, Irene Koh’s pencils and Vivian Ng’s colors bring the striking visuals of this universe to life in a splendid manner. Ko’s pencils replicate the characters and environments of Legend of Korra with an instantly recognizable authenticity, all the while maintaining her own visual style. Koh does the show’s creative team great service by adhering to the aesthetics of Korra’s world, with everything from the streets of Republic City to the garb of members of the bending nations being drawn with spot-on detail. The designs of some of the spirits that make appearances are stunning as well, fitting in with the Avatar world but bringing something new to the table at the same time (some reminded me of a Miyazaki creation). The fight scenes bring the proper amounts of visceral intensity, with the bending martial arts and destruction looking like something right out of the show. Her talent shows through in the small moments as well. Much of what makes Korra and Asami’s relationship so engaging to read is how the couple is presented on the page. Hints of trepidation are interlaced with the apparent care and love the two have for each other, and this creative touch makes the pair feel all the more believable. The colors, shadows, and lighting effects provided by Vivian Ng bring this series to life in the Avatar ever bit as much as the pencils do. The hazy light of the spirit world, gas-lantern lit streets, and the array of elemental shades match the gorgeous views in both animated series. The lettering from Nate Piekos is simple yet dynamic, altering fonts based on characters and of course changing drastically for exclamations and screams/cries. The visual work on Turf Wars is not only a love letter to the creative team of the original animation but a triumph that stands on its own. 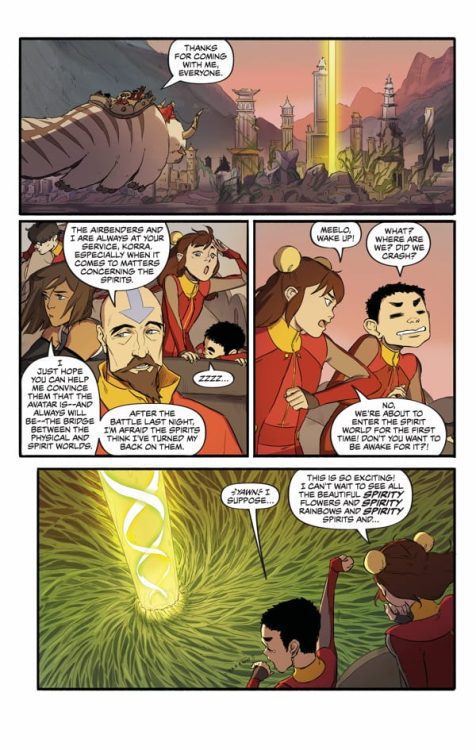 The Legend of Korra: Turf Wars is fast-paced, exciting romp through Republic City and a fun return to this universe. Dimartino’s script feels like a natural progression of the events of the final season, while he delicately fleshes out the new romance between Korra and Asami. The political fallout from the show’s final season is handled in a simple but effective in-universe manner. I would have liked to have spent more time with some of the other members of Team Avatar and the main villain, but this is still an engrossing read. The visual work of Irene Koh and Vivian Ng is a gorgeous effort that perfectly encapsulates the look and feel of the Avatar animated universe, while still having the unique style of both artists. For those unfamiliar with Dark Horse’s library edition format, it is without a doubt one of the finest oversized collected edition formats in comics. An over 9×12 book with stop-a-bullet thick paper stock, and tons of extras including scripts and looks at the artistic process. Will this story convert any non-Korra fans? Not likely, as this is very much a story crafted to maintain and continue the legacy of these characters rather than improve on some of the show’s flaws. However, if you’re a huge fan of this world and the characters in The Legend of Korra, then this first Library Edition will be a must-own. Be sure to order it from your local comic shop or online now!