Review: Oliver Queen And Hal Jordan Team Up In THE GREEN LANTERN #8

Now that Hal Jordan is back from his cosmic battles against Controller Mu’s forces, he’s ready to reacclimate himself to Earth life again. And what better way to do this than to team up with his old pal Oliver Queen, a.k.a. Green Arrow? THE GREEN LANTERN #8 is a fun, buddy cop story that addresses the ever-present reality of drug abuse in our society.

Grant Morrison takes readers to the planet Hadea-Maxima, a war-obsessed world that believes institutionalized murder is required to maintain a healthy population level. One of the occupants, a drug lord named Brotorr, enlists an assassin to take out a dealer called Glorigold who’s based on Earth. The job? Kill Glorigold and destroy the planet.

The story shifts to a drug deal taking place in an abandoned alley, featuring a desperate man willing to pay handsomely to get his fix. It’s here we see a classic Green Arrow/Green Lantern team up in action. And we see them uncover something quite disturbing. 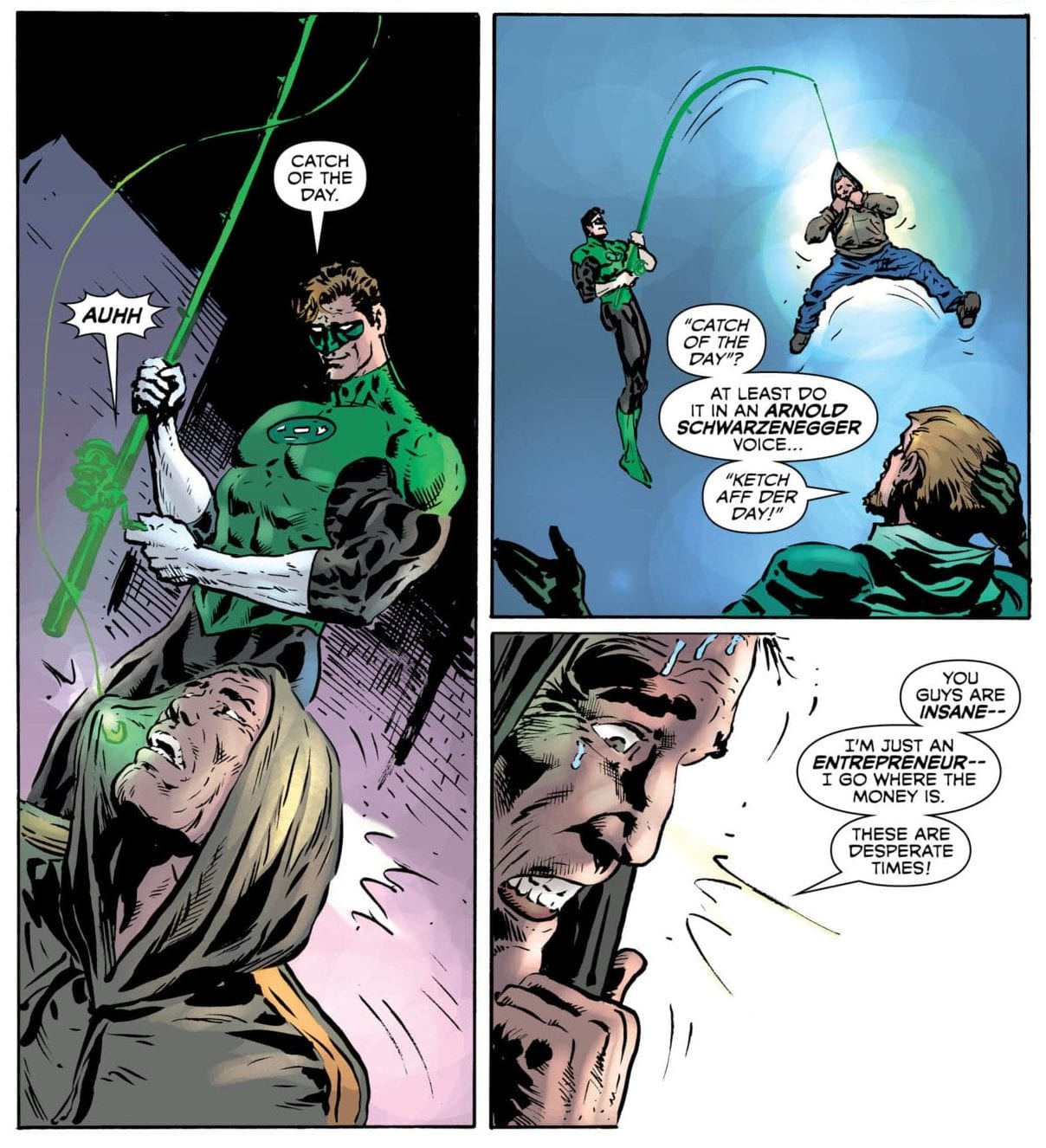 The interplay between these two heroes gives readers the impression of a long friendship that’s been neglected. The amount of time apart, while somewhat of a sore spot for Oliver, nevertheless subtracts nothing from their personalities’ chemistry. And their comparability makes them the perfect heroes to investigate the true purpose of the intergalactic drug trade.

Readers will enjoy this detective story as it deals with both cosmic and contemporary issues. It serves as a quintessential Green Arrow/Green Lantern team up story for seasoned and new readers alike.

Liam Sharp’s penciling continues to astound readers in this series addition. The way he seamlessly shifts between the street level drug deal to the dimension hopping scenes is nothing less than impressive. Steve Oliff’s coloring complements these illustrations beautifully by using a wide range of colors to feature the aliens, heroes, and drug dealers’ interactions. And Tom Orzechowski’s lettering perfectly captures the characters’ emotions, such as the drug dealers desperation after being apprehended by the green clad heroes.

Sharp’s main cover shows the two heroes poised for action in front of an alien with a drug needle, giving readers a preview of the story’s subject matter. Toni Infante’s variant cover focuses on Hal, granting him an emerald sword conjured by the ring. This is a cool illustration highlighting Hal’s battle prowess and ingenuity, two qualities which he will need in this story. 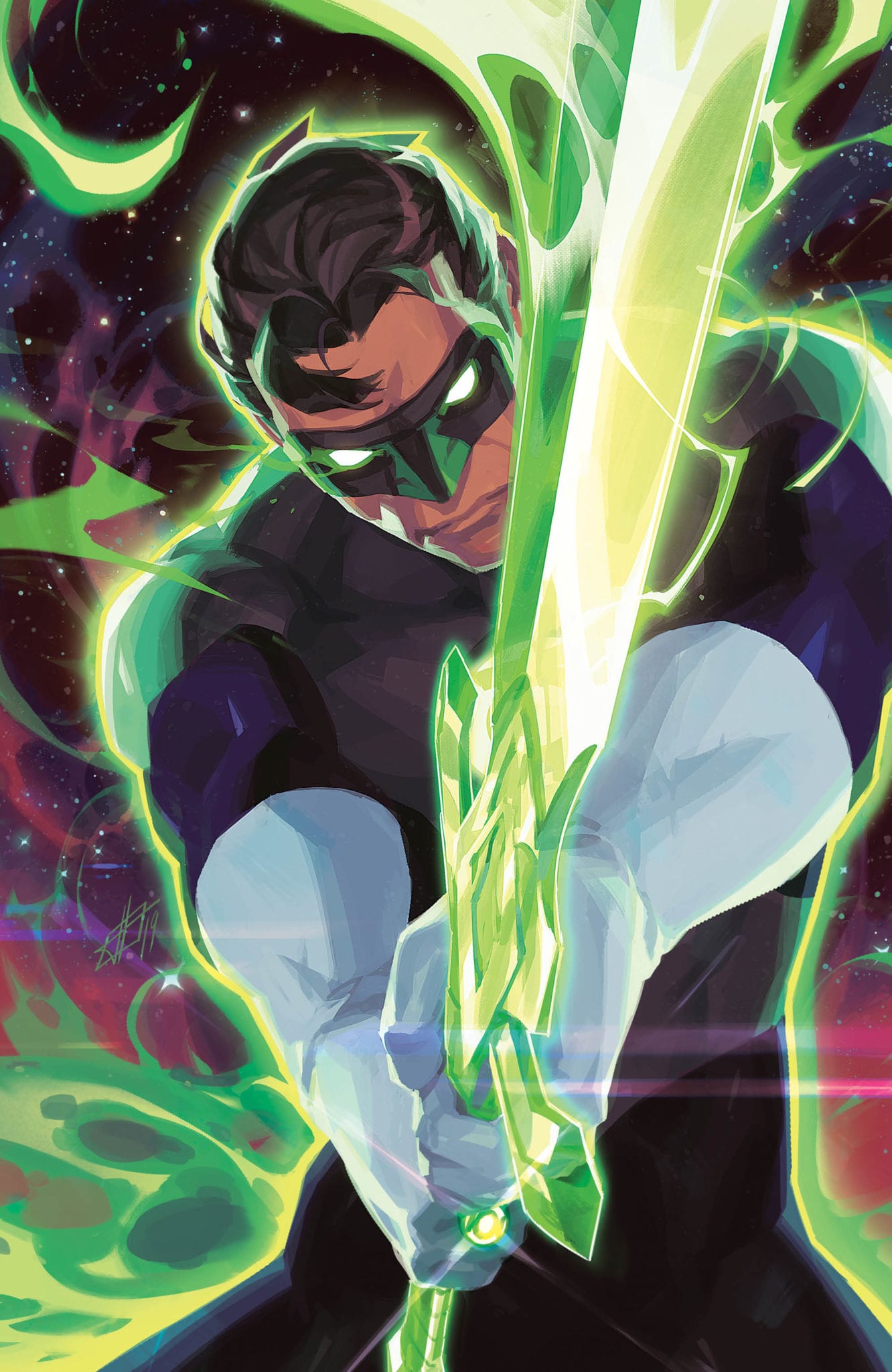 THE GREEN LANTERN #8 takes a topical subject and adds the chemistry of Oliver and Hal to craft a satisfying story. It’s just the boost of motivation Hal needs to jump back into action after the Controller Mu saga.

What did you think of this team up story? Let us know in the comments below!

Review: Oliver Queen And Hal Jordan Team Up In THE GREEN LANTERN #8Another classic team up between the Green Arrow and the Green Lantern. Their entertaining banter is only matched by the engaging plot.