It’s August 7th and THE GREEN LANTERN #10 is now available at your local comic book shop—it’s one you won’t want to miss. Hal Jordan, after having gone toe-to-toe (briefly) with the Anti-Man, finds himself in the company of an array of Green Lanterns from other universes. They too have been alerted to the threat of the menace and the danger it poses to the multiverse.

Grant Morrison takes the grand task of multiversal storytelling upon himself in this issue, detailing the amassing of Green Lanterns with widely differing personalities and power sets. Case in point: The opening scene featuring Hank Hallmark of Earth-36, the Green Lantern who serves the Custodians of the Cosmos (a nice place on the Guardians of the Universe). Though his power derives from a green flashlight instead of a Lantern ring, Hank’s personality is quite similar to Hal’s, which makes him most relatable of the green-clad  heroes to be introduced in this issue. 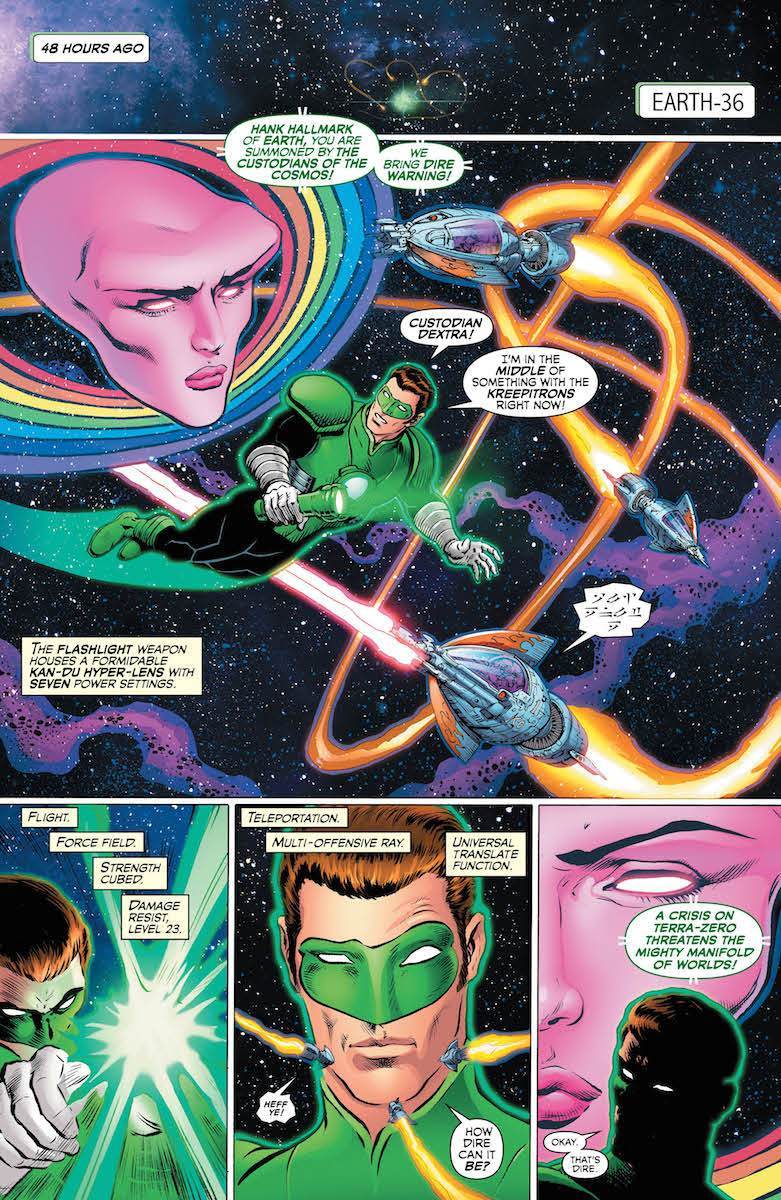 After becoming acclimated with Hank, readers get to see some fan favorite Green Lanterns, including Bat-Lantern and Tangent. The former’s brooding nature and the latter’s aloofness bring these characters to life. But the one thing each member does have in common is the Anti-Man threat, whose presence signals the impending doom of the entire multiverse. It’s going to take all of their cooperation to defeat the beast who represents everything that is antithetical to the Green Lantern life-honoring ideals.

This issue amasses excitement, intrigue, and anticipation for the coming battle. We can’t wait to see where Morrison takes us in the coming issue!

Sharp’s main cover offers brilliant illustrations of the multiversal Green Lantern team in battle poses, preparing readers for the coming conflict with the Anti-Man. Kaare Andrews’ variant cover depicts Hal alone in a more realistic style to highlight him as the de facto leader of the team.

THE GREEN LANTERN #10 is the beginning of the end of the Anti-Man saga. We see the Green Lanterns preparing for battle and devising a strategy for saving the decaying multiverse.

Who was your favorite iteration of Green Lantern from the various universes? Let us know in the comments below!