Review: The Cruise from Hell in ALIEN VERSUS PREDATOR: THICKER THAN BLOOD

Disregarding (and hopefully forgetting) the two films, the Alien Vs. Predator franchise has had a litany of successes in the worlds of novels, video games, and of course comics. Now, writer Jeremy Barlow and artist Doug Wheatley team up for a new AVP mini-series from Dark Horse Comics, “Thicker Than Blood.” This first issue offers a simple but fun and bloody close-quarters adventure with a unique starring cast of a young girl and her android little brother.

The USSC Double Down is a luxury cruise vessel packed with vacationing patrons indulging in all the ship has to offer, with the all-family crew going about their usual tasks. That is, until the ship takes a detour through uncharted space and attracts the attention of some skull-hunting undesirables. Now, the two children of the ship-owning family must work together to dodge a bloody end and make it off the ship alive. 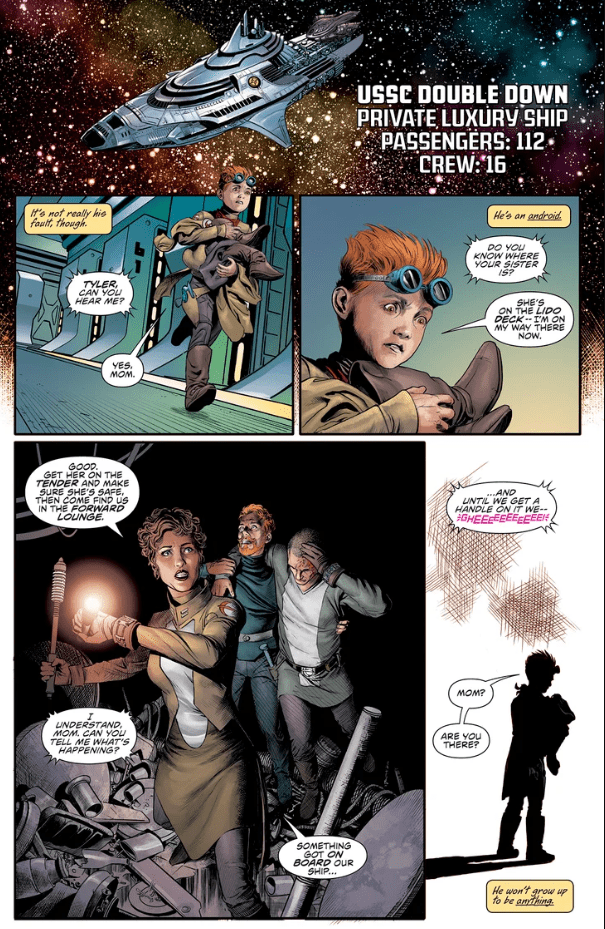 Writing an Alien Vs. Predator series as opposed to just an Alien or Predator one requires a different and arguably more mainstream approach than either of the other two. The sort of tense slasher-in-space mixed with hard sci-fi of the former and the prey vs. hunter tone of the latter needs to be juggled with an almost blockbuster style bravado. Jeremy Barlow‘s script manages to do just this, all the while maintaining a simple story with breakneck pacing. Things happen rather fast in this first issue, with only a short quiet moment on the first page to introduce the most important protagonist. Despite this, Barlow still manages to skillfully introduce Tyler and Maria (the two leads) and their conflicts with each other in moments between carnage. The speed at which the blood starts flying in this debut issue may be an issue for more slow-burn horror fans of traditional Alien and Predator titles, and this is understandable. However, for a four-issue mini-series starring a couple of kids on a cruise ship, this kind of pacing is sensible and still brings on the terror these aliens are known for in bursts. Without getting into spoilers, future issues are already looking promising in ramping up the horror and bloodshed. 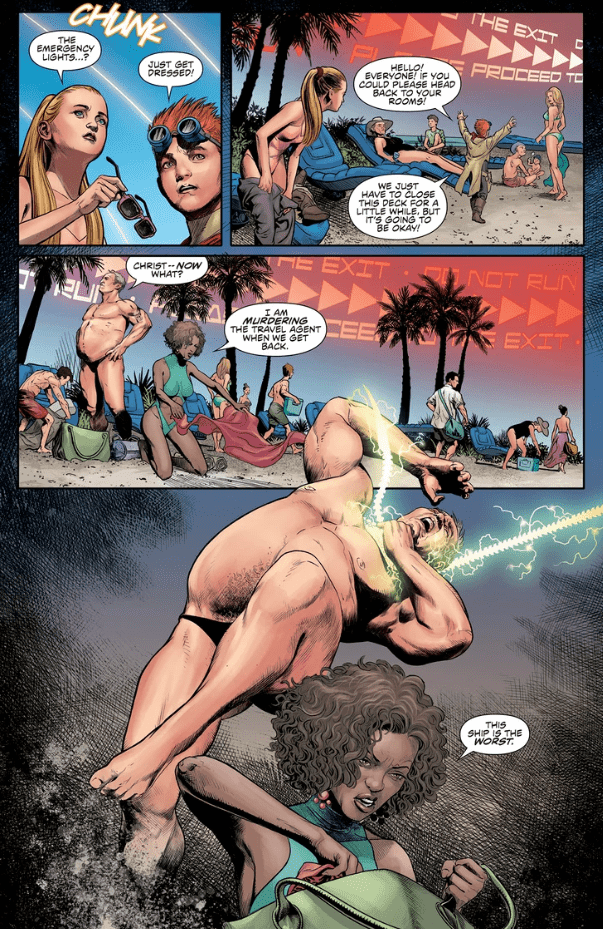 The universe that these two iconic aliens inhabit requires a sort of specific talent to bring out the dark and claustrophobic tone an Alien Versus Predator comic needs. Fortunately, this series is blessed with talents of Doug Wheatley‘s spectacular pencils and inks in conjunction with Rain Beredo‘s choice color palette. Wheatley’s level of detail when it comes to shipboard enviornments, invidivdual characters and of course the titular beasts themselves is second to none. The halls and rooms of the ship vary from the sanitized and gray crew rooms to the colorful guest attractions, and colorist Beredo is given a surprising amount of variety for a comic most would assume would just be filled with black, gray and red. Lots and lots of red. This isn’t the case however, and the brighter moments contrast neatly with scenes dressed in claustrophobic shadows. Each individual character, from the main cast to random passengers, each look completely different and can be told apart by identifying features. Wheatley’s art has a touch of photo-realism which helps immensely with the immersion. His heavy inks he uses for detail work superbly with Beredo’s use of dense shadows to create the exact aesthetic this comic needs. 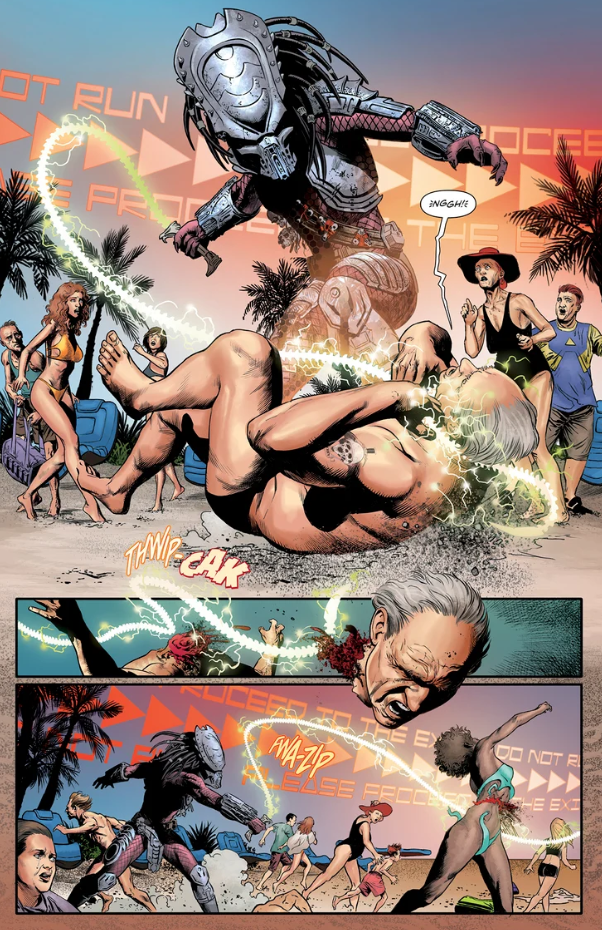 “Alien Versus Predator: Thicker Than Blood” #1 is a fast paced and brutal start to a promising new mini-series. Writer Jeremy Barlow’s script may be simple and maybe even slightly rushed by franchise standards, but the premise behind its central characters is intriguing enough to stick with the story. Doug Wheatley and Rain Beredo’s deliver their talents in spades, bringing to bear possibly some of the best artwork this franchise has ever seen. If you’re a fan of these iconic monsters and the franchise as a whole, be sure to pick this issue up at your local comic shop on 12/11.

Everyone's favorite warring extraterrestrials terrorize children and vacationers in a fun start to a new AVP miniseries.Review: The Cruise from Hell in ALIEN VERSUS PREDATOR: THICKER THAN BLOOD