Review: THE AMAZING SPIDER-MAN #57 – Spider-Man At His Breaking Point

The Amazing Spider-Man #57, out now from Marvel Comics, is an issue full of biting dialogue and story that is supported phenomenally by the art, coloring, and lettering. 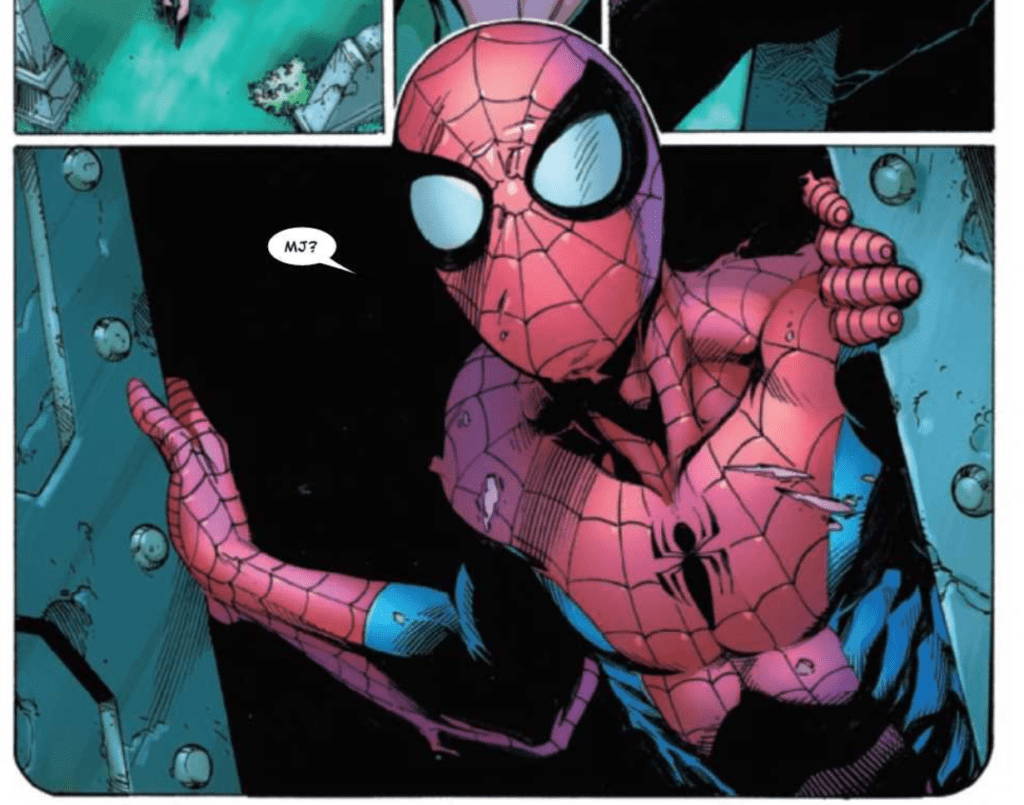 It has been a while since we’ve had an issue with writing this splendid. Nick Spencer makes The Amazing Spider-Man #57 into an unforgettable issue. Characters are pushed to their breaking points, and this is accompanied by dialogue that stings. I was taken aback several times while reading and verbally gasped at one moment. Spencer also makes use of silent panels, which leaves the reader haunted by the actions that occurred before them. All of this combined provides for a captivating issue that leaves the reader gripping the pages tight in suspense, wondering what will happen next. In true Spencer fashion, the issue features a cliffhanger, but it is not on the final page as we would expect. Instead, the last page has silent panels and a quick dialogue exchange that perfectly captures the dread the characters feel of what is to come. It is a thoroughly spine-tingling scene. 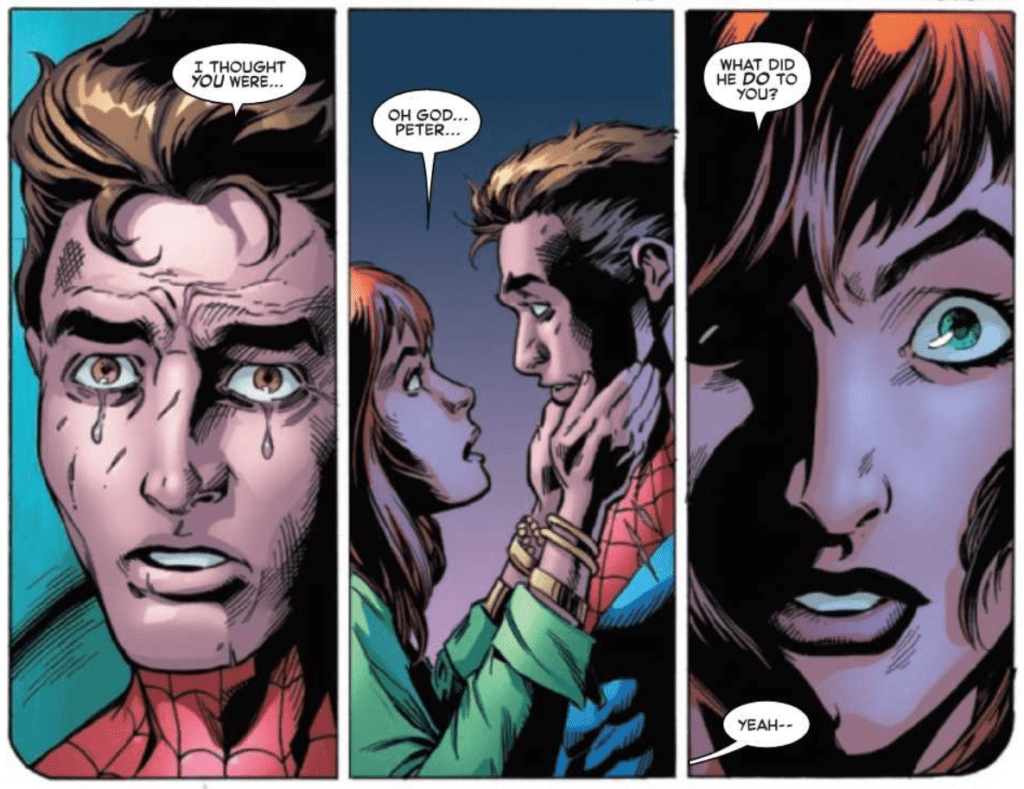 Mark Bagley’s pencils and John Dell, Andrew Hennessy, and Andy Owens’ inks create some spectacular art for The Amazing Spider-Man #57. The staging of panels and body language of characters adds a remarkable amount of weight to dramatic scenes, and I’m not even sure how it’s possible to show so much emotion through a character’s mask. The team also uses techniques such as characters extending past the panels’ borders, which is always a fantastic way to make the issue feel more energetic.

The Amazing Spider-Man #57 features the coloring talents of Rachelle Rosenberg and Edgar Delgado, and they greatly enhance the reading experience. The initial palette used has very calm and cool colors, and later in the issue the palette is dramatically shifted in a manner that shocks the reader. It goes in hand-in-hand with the story and results in a jaw-dropping moment. Rosenberg and Delgado also use methods such as using a brightly colored background to instill energy into a scene, which is done in an extraordinary way in the issue. 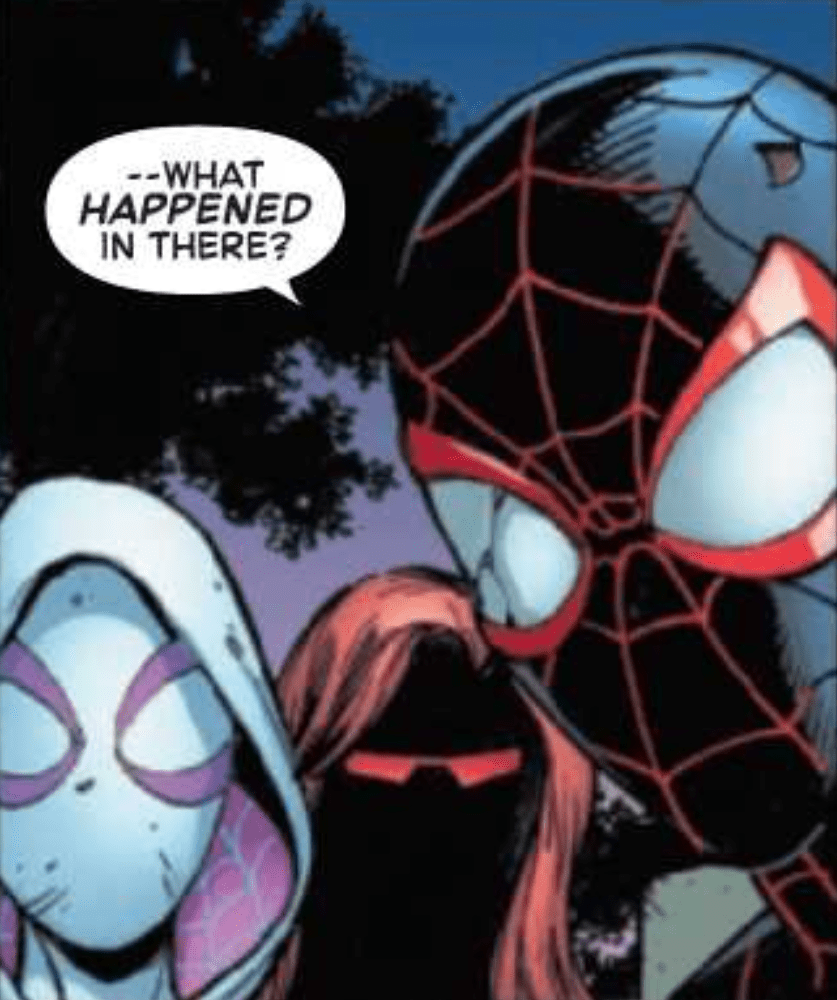 VC’s Joes Caramagna lettered The Amazing Spider-Man #57, and his choices help make the dialogue-heavy scenes a joy to read. By emphasizing the right words and arranging speech bubbles in a way that allows the story to flow uninterrupted, Caramagna helps immerse the reader in the scene. Caramagna also utilizes techniques such as making the borders of speech bubbles thicker for emphasis, which is highly effective.

The Amazing Spider-Man #57 is a wild ride from start to finish and pulls out a plethora of emotions from the reader like few comics are able to do. The art is gorgeous, and this issue features some of my favorite coloring of the entire series. The lettering helps it all flow smoothly, and we are left with an astounding issue that any Spider-Man fan would be disappointed to miss.

One of the best issues of the series, with gasp-worthy dialogue, expressive art, stunning coloring techniques, and smoothly-flowing lettering.Review: THE AMAZING SPIDER-MAN #57 - Spider-Man At His Breaking Point