The Amazing Spider-Man #52.LR, out now from Marvel Comics, is an enthralling issue full of many evenly balanced storylines and gorgeous art. 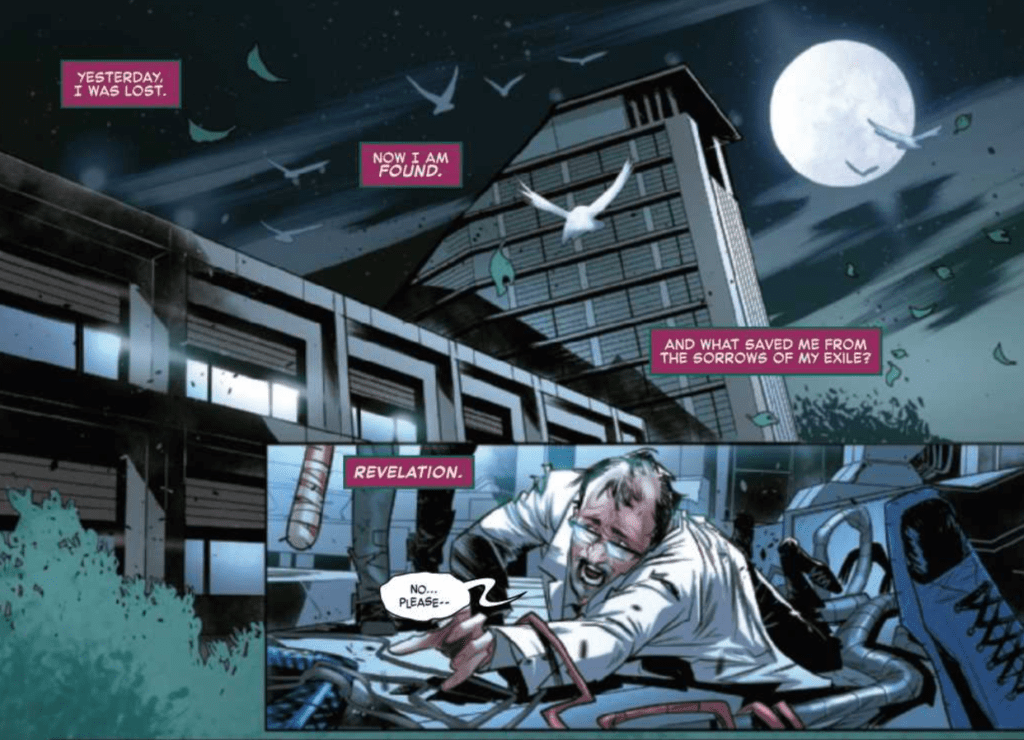 About the Book:
Doctor Strange and Black Cat are on a magical quest to save Spider-Man’s soul, and they need the help of the recently unpossessed spider-powered friends of Peter. Simultaneously, Norman Osborn, now cleansed of sin, needs to convince Mary Jane to help him talk down the demonic villain Kindred, whose identity we now know to be Harry Osborn. As they attempt to do good, the Sin-Eater and his cronies enact a plan to return them to their previous level of power: by taking it from the fearsome Morlun.

Matthew Rosenberg and Nick Spencer do it again in The Amazing Spider-Man #52.LR, where three separate storylines are well-balanced in a single issue. The stories themselves are deeply engaging. Each set of characters perform actions that are surprising and hard to predict for the reader but are still are the next logical steps of their journeys. This provides for believable yet enjoyable stories. The best part of the issue’s story lies in how the scenes are laid out. Spencer and Rosenberg do a phenomenal job of juggling each of the storylines. They never dwell on one scene for too long or little, and whenever a scene consists mostly of dialogue and little action, it is followed by an intense, visually exciting scene. This fantastic setup of the issue causes it never to have a dull moment and makes it a delightful read. 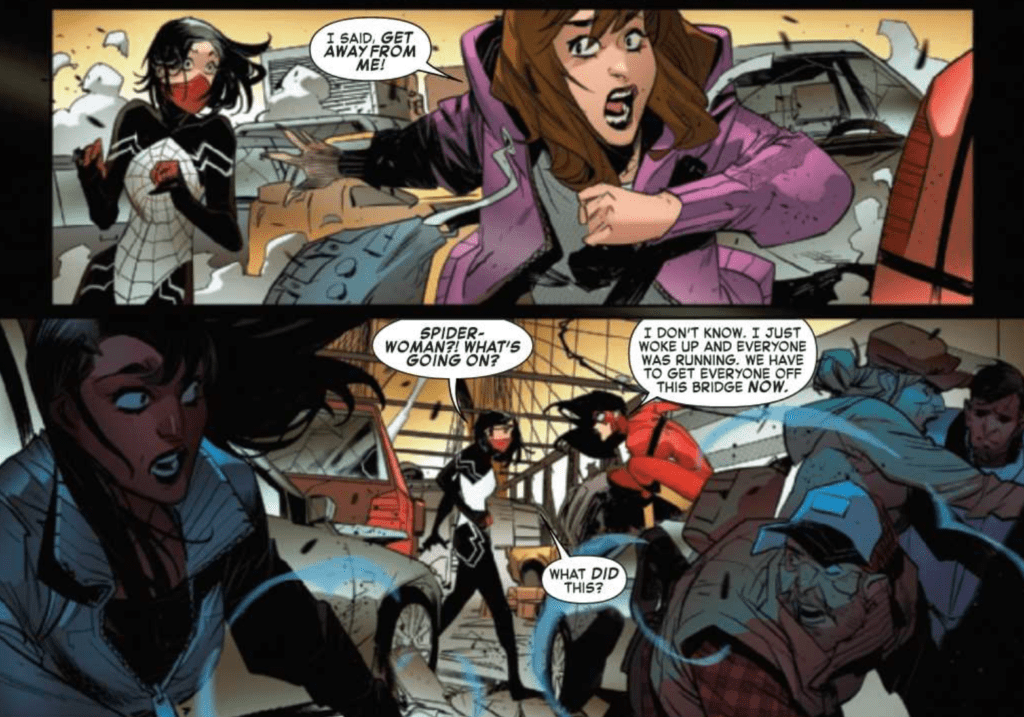 Federico Vicentini provides some stunning art in The Amazing Spider-Man #52.LR. It is evident from the incredible amount of detail in every panel that Vicentini put lots of effort into the issue, and it pays off by making the world feel more real. The debris that can be seen flying through the air in one panel is particularly notable and shows just how talented and dedicated Vicentini is. Another remarkable aspect of Vicentini’s art is his wonderfully expressive faces. This is very important, especially for the dialogue-heavy scenes of the issue. Without any visually gripping action in a scene, facial expressions need to be superb, and this issue certainly delivers on that.

The colors of Marcio Menyz and Erick Arciniega give life to The Amazing Spider-Man #52.LR. There is an admirably broad color palette that shifts for each scene to reflect the tone. There is an impressive tint to panels that are flashbacks. This tint allows the reader to distinguish that a panel is a flashback but does not overpower its colors. Menyz and Arciniega also use the technique of having a bright, single-colored background for panels where the action needs to be emphasized. This is a highly effective technique that provides an extra punch at the right moments in the story. 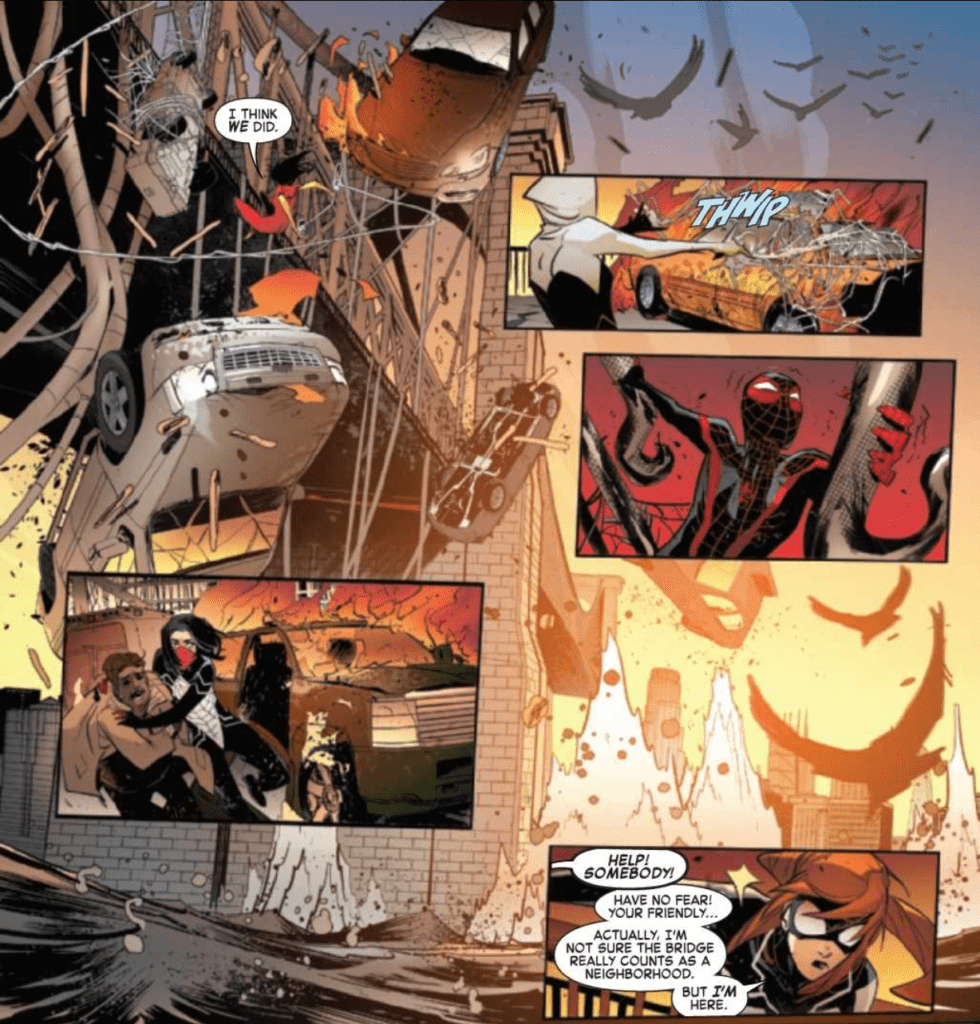 The Amazing Spider-Man #52.LR features some brilliant lettering thanks to the work of VC’s Ariana Maher. Throughout the issue, there are many sound effects with large bold fonts, and the issue features a different style of lettering for nearly every case of this. Some of the fonts used are not common in mainstream comic books but still fit nicely with the rest of the story and are a refreshing new choice. Maher does an incredible job of keeping the lettering interesting, and there is never a single stale moment.

The Amazing Spider-Man #52.LR is another excellent issue to go along with the current Amazing Spider-Man issues. It is great to focus on secondary characters’ actions, and each LR issue gets more and more exciting. Spencer and Rosenberg weave together the many storylines perfectly, and the art and colors tell the story beautifully. Not to mention the lettering of Maher, which adds an incredible amount of depth to the story. This issue is a gripping read and is a wonderful companion to the recent The Amazing Spider-Man books.