The Amazing Spider-Man #46 is an astounding second issue in the “Sins Rising” event that keeps the reader deeply engaged with the unraveling storyline, and continues to set the stage for greater things to come.

About the Book:
The writing of Nick Spencer, the penciling of Marcelo Ferreira, the inking of Roberto Poggi, the colors of David Curiel, and the lettering of VC’s Joe Caramagna work together to once again produce an astonishing issue. The second part of the “Sins Rising” event, The Amazing Spider-Man #46 is filled with action and riveting storytelling. The Sin-Eater is back with new abilities and is “murdering” villains of Spider-Man. However, once in the morgue, these recently deceased criminals awake without the urge to hurt anyone else. We don’t know the extent of the Sin-Eater’s new powers, but while he seems to be doing good deeds by getting rid of villainous behavior, Spider-Man does not trust him.

The previous issue of The Amazing Spider-Man left on a cliffhanger and raised many questions that were never explained. There is still much unrevealed about the Sin-Eater and his new powers, as well as how he is affecting the villains he shoots. This issue answers some questions about the Sin-Eater and his capabilities, but still leaves much to discover. This is an effective way that Spencer is able to keep readers engaged, and he has perfected the balance of revealing enough information to keep the issue deeply entertaining, while also keeping enough secret to intrigue the reader.

The beginning of The Amazing Spider-Man #46 has internal dialogue of the famous web-slinger, and it is truly a highlight of Spencer��s writing in this issue. The way that Spencer is able to portray Spider-Man wrestling with what happened between him and the Sin-Eater in the past, as well as the Sin-Eater’s return, is clear and entertaining. It is evident in most issues, but in this one especially, that Spencer has a strong grasp on the Spidey’s character and personality. The pencils and inks of The Amazing Spider-Man #46 are absolutely fantastic, and Ferreira and Poggi do an excellent job of making the story come to life. This issue would be worth purchasing simply to look at the stunning art. Characters are expressive, poses are dynamic, and each action scene is so impressive that several pages deserve a moment of reflection before continuing reading. Several techniques are utilized to allow panels in action sequences to stand out, including action lines and characters overlapping panel borders, which make the issue an incredible page turner. 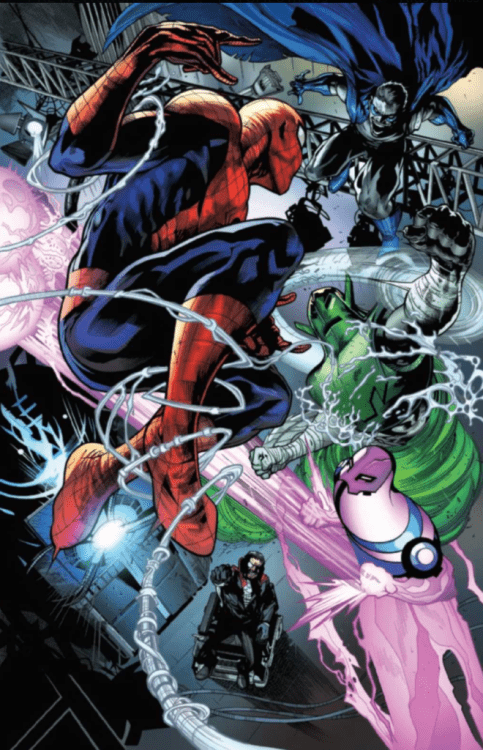 Curiel’s coloring of The Amazing Spider-Man #46 is absolutely superb. The colorist chooses many vibrant colors which not only provides an astonishing composition, but also highlights the colorful world these characters exist in. When the Sin-Eater arrives, his dark demeanor and story act in direct opposition to this, making his actions quite horrific. This issue also features many lasers and items that emanate light, and Curiel does a fantastic job of showing the light reflecting off of objects and people.

The lettering by Caramagna does a splendid job of complementing the fast-paced action of The Amazing Spider-Man #46. It is done in a fashion that allows the story to progress naturally, and changes in font and font size are used wonderfully to give emphasis to certain sound effects. For example, the sound of the Sin-Eater’s weapon firing has large red letters and a bold font that reads “Blam.” This particular lettering choice stands out so much that the impact of the Sin-Eater’s weapon firing has a deep impact, even if the shot itself is not shown on-panel.

The Amazing Spider-Man #46 is another outstanding issue in the “Sins Rising” event. The art wonderfully complements the story to provide an engaging tale. It keeps the readers entertained all the while setting the stage for the rest of the event, which I’m sure will be amazing as well.

A deeply engaging second issue, that is sure to keep the reader turning the pages.Review: THE AMAZING SPIDER-MAN #46 — A More Powerful, More Mysterious Sin-Eater