Review: TEENAGE MUTANT NINJA TURTLES: THE LAST RONIN #3 – How The Past Shapes The Future

TEENAGE MUTANT NINJA TURTLES: THE LAST RONIN #3, available on Wednesday, May 26th, dives deeper into the mysterious circumstances surrounding Leonardo, Donatello and Raphael’s disappearance years ago. In the last issue Michelangelo stumbled across April, her daughter Casey Marie, and a host of other resistance fighters after attempting to infiltrate the new overlord’s base in New York City. But even teamed up, do our heroes have a chance of making a difference?

The story opens up with the New York City overlord Hiroto, son of Karai and grandson of the Shredder, addressing the people. Readers will remember the warrior waging all-out war on the resistance forces in the city, which now includes Mikey, April, and Casey Marie. Now Hiroto pledges to fight even harder against these “terrorists,” weeding out anyone who gets in the way. 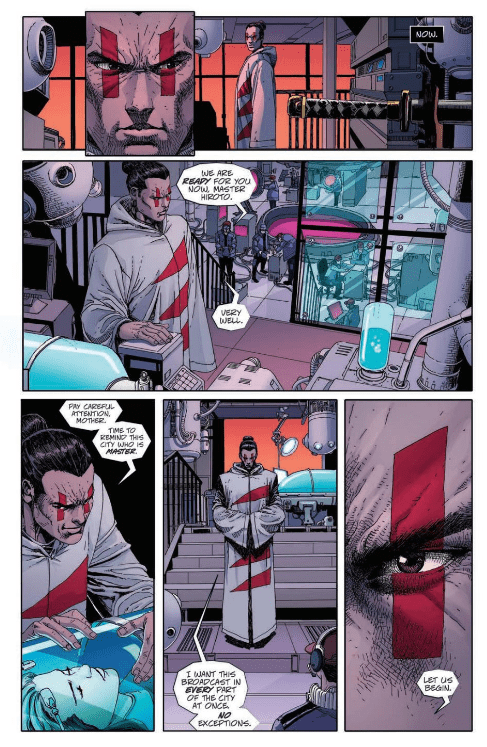 Back underground, April shows Mikey the severed head of the robot Fugitoid. Immediately readers find themselves swept into the past where they learn more about the circumstances that led to his brothers’ deaths; somehow Fugitoid is at the center of it all.

This form of storytelling employed by Tom Waltz and Kevin Eastman introduces us to each new piece of information with perfect pacing. This keeps readers from being overwhelmed. But it also builds anticipation as we uncover each event that led to the present dystopia.

The illustrations in this issue are fantastic. Esau and Isaac Escorza’s penciling and ink work provide readers will an incredible amount of detail, which helps bring this dystopian version of New York City to life. We also loved how Luis Antonio Delgado’s coloring added tannish tints to the flashback scenes to help distinguish between the two periods. In addition, Shawn Lee’s lettering boxes were placed well in each panel to avoid distracting readers from the other illustrations.

TEENAGE MUTANT NINJA TURTLES: THE LAST RONIN #3 reveals much of the backstory information readers have been waiting for. We can’t wait for the next installment!

What secrets do you hope to see revealed in the next issue? Let us know in the comments below!