TEENAGE MUTANT NINJA TURTLES: THE LAST RONIN #2, the highly anticipated second installment of the ambitious series, hits stores on Wednesday, February 17th. Readers learned the ninja protagonist was in fact Michelangelo. But before we see what happened to his brothers, the seasoned warrior falls from a building while searching for the mysterious Hiroto. Mikey believed he was done for and attempted to die a warriors death, but someone saved him. And they may be connected to the legendary April O’Neil. 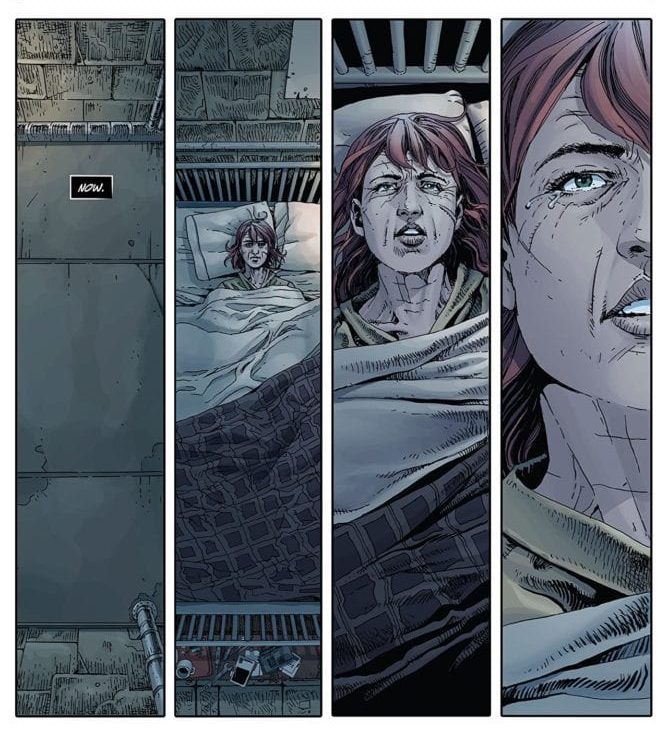 An aged version of April awakes in her apartment in the first panels of this story. The reader watches as she experiences a vivid flashback of a night many years ago. In it the Foot Clan attacks Splinter and the turtles, leaving the elderly rat severely wounded. 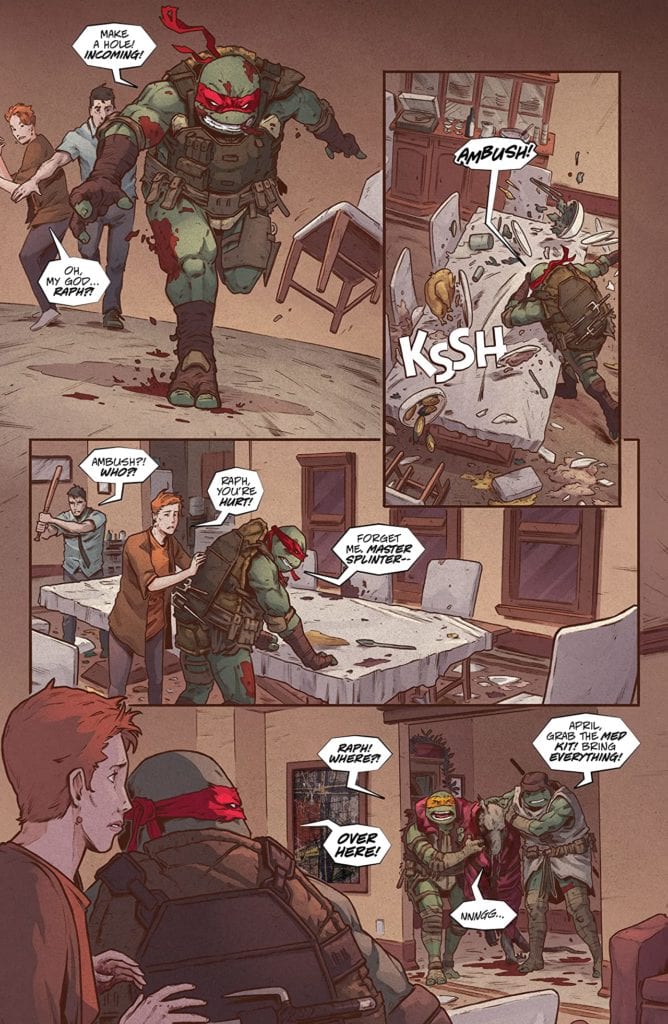 The flashbacks soon shift to the present version of Mikey recovering in April’s home. He continues his conversation with his deceased brothers, which starts out quite peaceful. But a rage soon boils over in the ninja much like the heated tea kettle he set. It’s clear Mikey still struggles to forgive Raphael for his “hot-headedness.” His actions on the night of the Foot Clan’s attack were the last straw, and they’re laid out for readers in stunning detail.

Kevin Eastman, Peter Laird, and Tom Waltz’s narrative offers amazing characterization for Mikey. Rather than leaving readers wondering how he changed so much, they show us the life experiences, choices, and memories of his brothers that led him on a new path. What’s more, we learn what’s become of April and the mysterious figure who’s been assisting her.

Eastman, Esau Escorza, and Isaac Escorza’s penciling and ink work did a fantastic job of crafting scenes of both the past and present versions of our protagonists. Penciled lines of age are present on both April and Mikey, while their flashback selves are drawn using smoother styles. Samuel Plata and Luis Antonio Delgado’s coloring work helped differentiate between the flashbacks and present reality by adding faint tannish tones to the memory scenes, generating a feeling of feeling of haziness due to their spot in the distant past. We also enjoyed Shawn Lee’s lettering, which shifts seamlessly between each character’s internal dialogue through varied word balloon colors.

TEENAGE MUTANT NINJA TURTLES: THE LAST RONIN #2 simultaneously answers many of our questions from issue #1 while posing an onslaught of new queries. We are anxious to learn more about what led to the present state of Mikey and April’s world.

Are you excited about Mikey’s reunion with April? Let us know in the comments below!