TEENAGE MUTANT NINJA TURTLES: JENNIKA II #3 hits comic book stores on Wednesday, January 20th, revealing the true culprit behind the unstable mutations in Mutant Town. These dangerous transformations of citizens living underground have led to an even greater stigmatization of the disenfranchised community. Fortunately, Jennika and her acquaintance Ivan are here to unearth the mystery. And as readers will find, appearances can often conceal the truth.

This story opens with Jennika and Ivan exactly where it left off last issue—smack dab in the middle of a group of mutants living in the underground. Despite rumors of their danger, the two find the truth to be much more interesting. It turns out they’re no different than those living aboveground, yet they somehow face even more hardships. 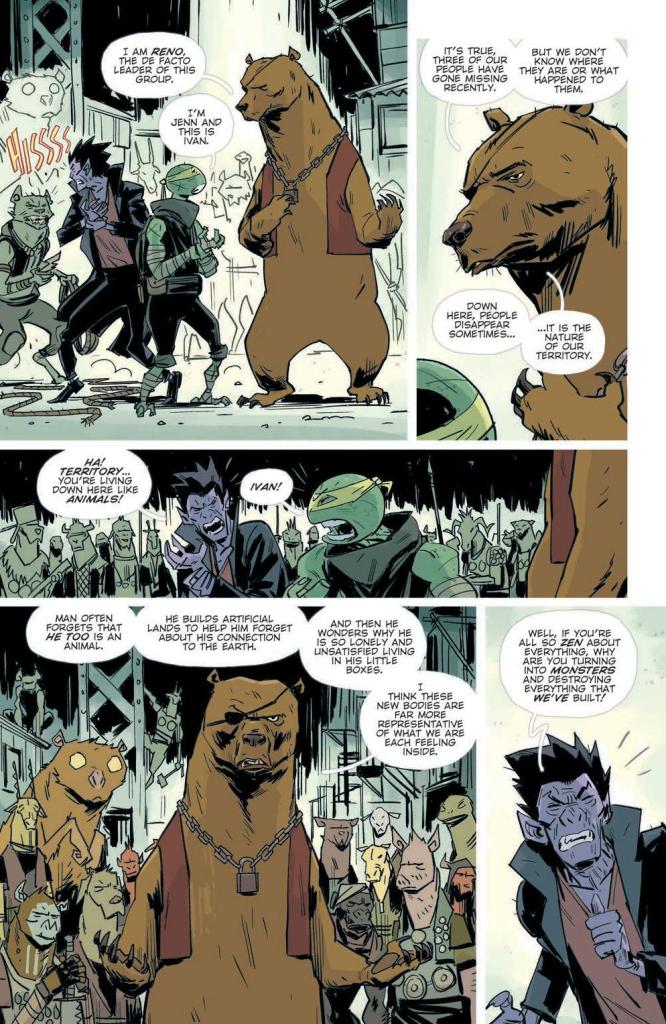 Unfortunately, the conversation is broken up by an abrupt scorpion mutant’s attack. Armed with strange syringes, it becomes clear this mutant is responsible for initiating the underground people’s mutations. But is she acting alone?

Brahm Revel’s narrative accomplishes an important task. It offers clever social commentary on the nature of the haves and have-nots. Despite the supposed scariness of the mutants living underground, it appears there’s a separate player taking advantage of them. The question: Who is funding them?

Revel’s penciling and ink work simultaneously details fast-paced action sequences and dramatic exchanges between Jennika and the other characters. These are fleshed out with his use of bright hues for our heroes set against darker backdrops, helping make their movements pop off the page. And Revel’s lettering is effectively placed around each character, preventing them from becoming obscured while simultaneously framing their forms.

Do you think Jennika can handle these threats facing Mutant Town all by herself? Let us know in the comments below!