Review: TALES FROM THE DARK MULTIVERSE: THE DEATH OF SUPERMAN #1 And The Problem Of Evil

TALES FROM THE DARK MULTIVERSE: THE DEATH OF SUPERMAN #1, available in comic book stores Wednesday, October 30th, is a tale of a dystopian future in which the Man of Steel perishes and all hell breaks lose. But it’s not the villains who unleash an unimaginable amount of destruction upon society—it’s Lois Lane. Her anger at the Justice League’s inability to prevent Superman’s death leads her to adopt a harsher stance against injustice in society. Coupled with an unexpected visitor who has the ability to grant a compatible person Kryptonian powers, the hard-nosed reporter is ready to step into the void her beloved left behind, vowing to root out evil in a way he never could.

Our story from the Dark Multiverse opens with Tempus Fuginaut, a celestial being much like Marvel’s The Watcher, pondering why evil exists in our world. Viewing the course of history over countless societies in the multiverse has acquainted him with mighty forces of darkness that often destroy the goodness in worlds—and it always comes back. 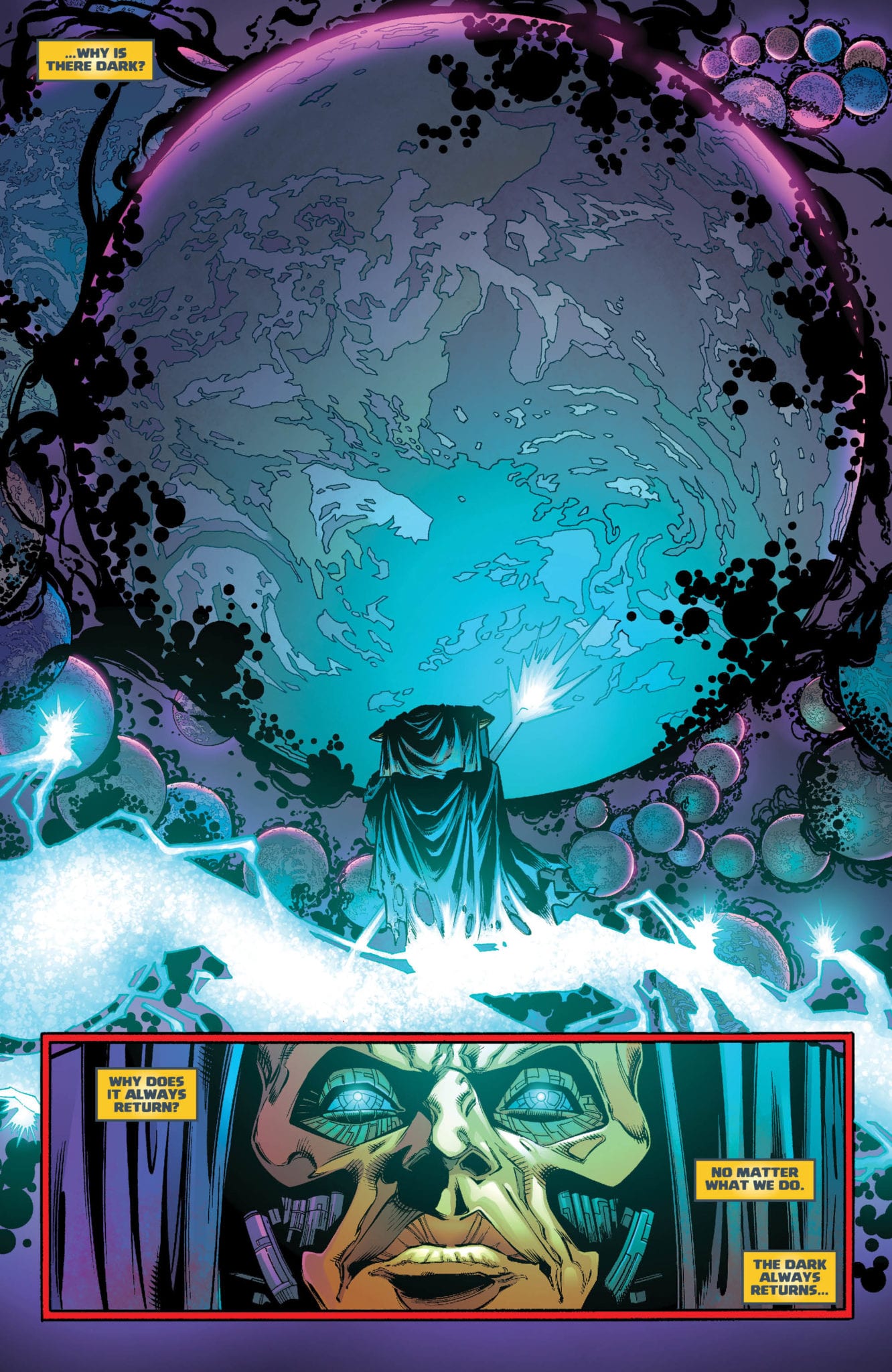 This question has been posed by all kinds of people throughout human history. It’s an existential angst within our hearts that tells us things should be different. By showing this doubt within a cosmic being like Tempus, writer Jeff Loveness establishes a relatability that connects with readers and makes it easy for them to empathize with an even more humanized character: Lois.

Following the death of Superman at the hands of Doomsday, Lois encounters The Eradicator at the Fortress of Solitude. This being from Krypton bestows all of the hero’s powers upon her after she pledges to continue the fight against evil. She adopts her own black and red version of the Kryptonian’s garb and begins a non-stop campaign against all the villains on Earth.

Throughout this process we witness Lois question why Clark held back so much of his power against the injustices plaguing the planet. In her eyes, the Big Blue Boy Scout provided quick-fixes to the problem of evil instead of seeking a permanent solution to the problem of evil. She believes it’s her duty to play God and root out all that’s wrong in the world, regardless of how much blood is spilled in the process.

The artwork within this issue balances a fine line between good and evil, much like the opposing forces of the main and dark multiverses. Brad Walker’s penciling, along with Drew Hennessy and Norm Rapmund’s ink work, gives us highly detailed scenes of horrendous wreckage amidst the futuristic structures that typically dot the Metropolis skyline. It’s as if all the hope of progress and salvation that Superman represented died with him. 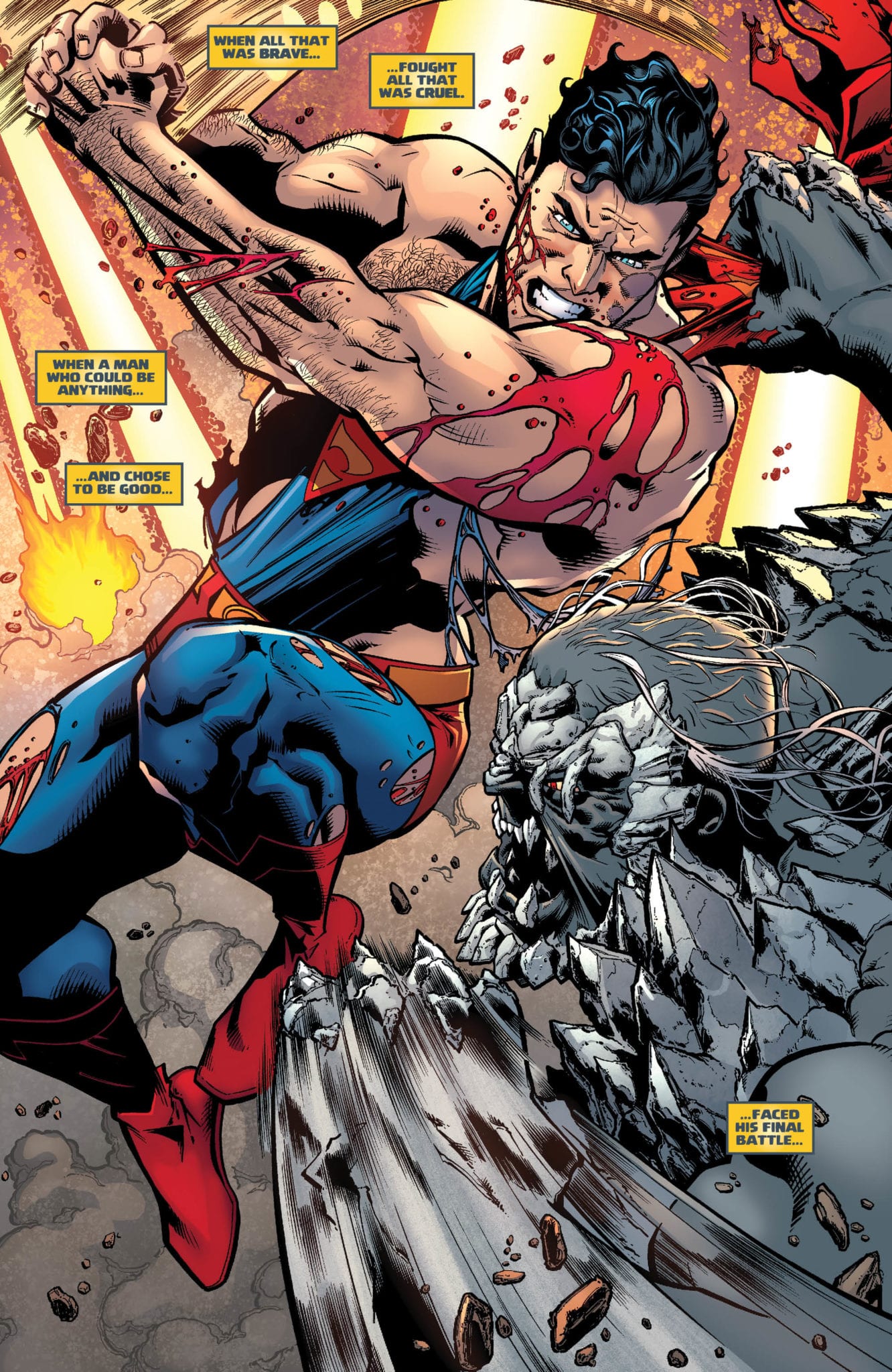 This clash of good and evil, order and disorder, is played out even more throughout the story with John Kalisz’s coloring; he contrasts the bright, primary colors of Superman and many of the other superheroes with the dark shades of red and black in Lois’ uniform. When it comes to lettering, Clayton Cowles draws us more into this clash by presenting her as a complex moral agent—her internal dialogue boxes are set in the neutral color of yellow so readers don’t assume either good or evil intentions.

Lee Weeks and Brad Anderson’s cover artwork features an intense image of Lois as Superwoman, wearing a black costume with the “S” sigil written in blood on her chest. This juxtaposition to Superman’s classic outfit, coupled with the rage in her eyes, shows readers the vast differences between each one’s philosophy of crime-fighting.

This new addition to the TALES FROM THE DARK MULTIVERSE series is a monumental shift in Superman storytelling. We witness a human like us (Lois) step into the god-like hero’s shoes and succumb to the temptations that haunt our deepest desires.

Do you think Lois is a more effective hero than Superman? Let us know in the comments below!

Review: TALES FROM THE DARK MULTIVERSE: THE DEATH OF SUPERMAN #1 And The Problem Of EvilThe story shows existential doubt within god-like characters, allowing writer Jeff Loveness to establish a relatability that connects with readers and makes it easy for them to empathize with an even more humanized character: Lois.