Sword Master #1 slashes it’s way out of Marvel Comics recent ‘War Of The Realms’ crossover and blends action, fantasy, mythology and martial arts into a manga-influenced book with tons of energy.

MIGHTY MARVEL MARTIAL ARTS DOUBLE TROUBLE! ALL-NEW ONGOING SERIES! You saw him tear through Fire Goblins in WAR OF THE REALMS with his big, damn magic sword! Now learn the mysterious origins of LIN LIE, A.K.A. SWORD MASTER, Marvel’s newest Chinese superhero, in the English language debut of the original series written by Shuizhu and drawn by Gunji! Haunted by dreams of demons, Lin Lie hunts for his missing archeologist father – and for the secret of the black sword he left behind. And in a brand new story written by Greg Pak (NEW AGENTS OF ATLAS), Sword Master teams up with SHANG-CHI! What happens when an undisciplined, untrained kid with a magic sword, tangles with the one and only, undisputed MASTAninditoER OF KUNG FU? (Spoiler alert: they will indeed drive each other crazy, with huge ramifications for the Marvel Universe!) 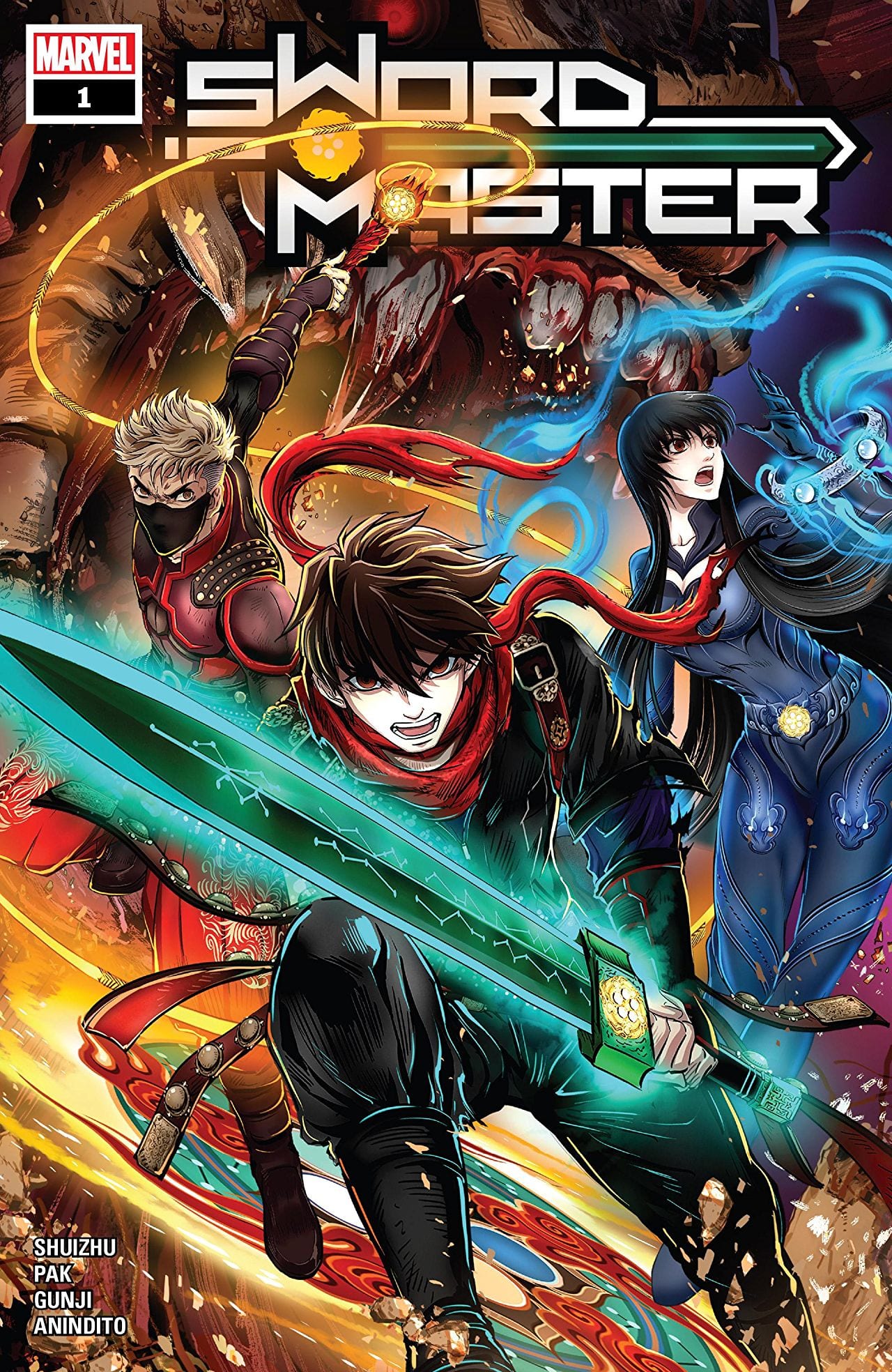 ‘Sword in The Tomb’
Written by: Shuizhu
Art by: Gunji
Adapted by: Greg Pak

Sword Master #1 contains two stories, and although they are different in style and look, both have the same narrative purpose in mind: catch up readers on who Sword Master is, what his purpose is and how this new character fits into the post War Of The Realms Marvel Universe. Both chapters succeed and create a fast, action-packed reading experience.

The first story, ‘Sword in The Tomb’, is a translation of a previously printed tale. This short chapter is a solid introduction. It suffers a bit from exposition and an often used dream sequence to get a lot of information across, but it moves fast and it’s engaging enough that it doesn’t drag or bore. There’s plenty of action and pathos. You also get a definite feel as to who Lin Lie is though his conversation and relationship with his friend Cheng (who is a classic best friend/sidekick right off the bat). Lin seems to be on then Peter Parker type of young superhero; he’s driven by tragedy but is not overly dark. It’s clear he feels he has a responsibility to find out what happened to his father and how he fits into this new world he has been thrust into. It also ends on a good cliffhanger. 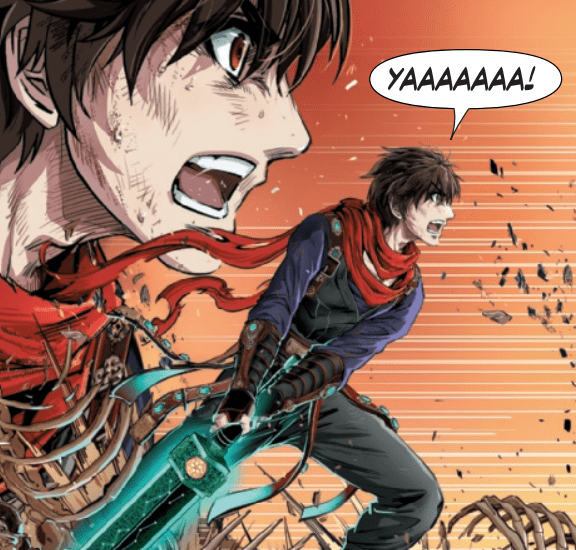 The second story, ‘Sword Master & Shang-Chi: Master Class’, takes Lin to New York, dropping the reader in medias res of Lin confronting a few unsavory dudes. It’s here that we get one of the highlights of the issue, an awesome appearance by Shang-Chi, Marvel’s Master of Kung-fu. Shang-Chi is one of Marvel’s ‘cult’ characters, and an appearance by him is always welcome. It means we’re going to get to explore a different side of the MU and that’s always exciting. This chapter is written by Greg Pak, and the writer creates an instant sensei/student dynamic between Lin and Shang-Chi that feels natural. Hopefully, this relationship remains central to the book. The training sequence, in particular, is nicely done and also serves as a good way for people who may not know who Shang-Chi is to get a good idea of who/what the character is.

Both stories here have really strong art, and each feels distinct to its own chapter. ‘Sword In The Tomb’, illustrated by Gunji, is very much of the manga school (big eyes, lots of speed lines, body movement and dramatic, intense facial expressions. Here there is only a hint of western comics influence coming out via panel placement and structure. It’s a visual treat; it’s just pretty to look at. 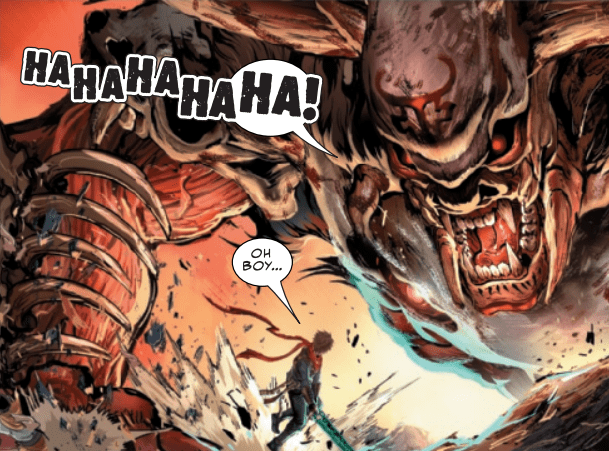 Chapter two’s art falls in line more closely with what we see in most Marvel Comics, but it still has the same energy, flare and dynamics we got in ‘Sword In The Tomb’.  Ario Anindito and Rachelle Rosenberg have good synergy and create a slightly darker tone that gives ion the New York atmosphere that helps create a strong sense of place. 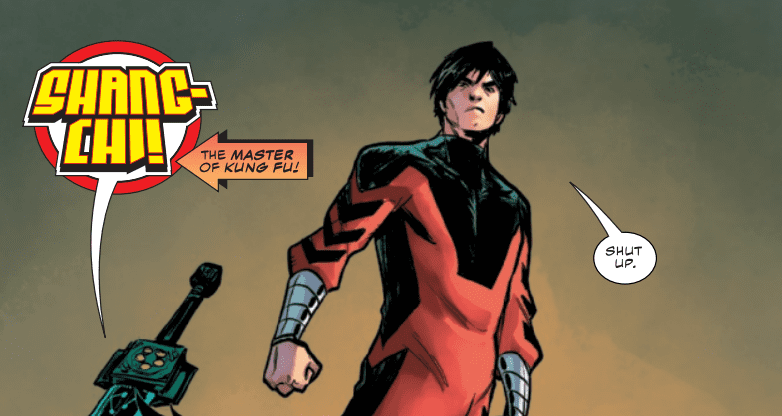 Sword Master #1 shouldn’t be missed. It’s great to see Marvel give a different kind of hero and story a chance. Comic readers should do the same. So grab a comic at your local comic shop!

Sword Master #1 shouldn't be missed. It's great to see Marvel give a different kind of hero and story a chance. Comic readers should do the same.Review: SWORD MASTER #1 Energetically Blends Fantasy, Martial Arts, Manga And American Comics