Review: SWEET TOOTH: THE RETURN #6 – So What Was That All About?

Contemporary comics all-star Jeff Lemire (Moon Knight, Black Hammer, Animal Man) and colorist Jose Villarrubia end their return to the world of hybrids and apocalyptic plagues in Sweet Tooth: The Return #6. The final chapter of this sequel series is full of the satisfying emotional beats and character-focused storytelling that we come to expect from Lemire, complete with great nods to the original series. It’s taken down a peg however by ultimately rendering this sequel as inconsequential. With consistently perfect visuals and ever-strong writing, this issue – and the series at large – is struck down by its own context.

“Once upon a time a young boy with antlers lived in a little house under the earth. He had a father and two nannies. They raised him to be good and to obey their every command. They said they loved the boy, and maybe some of them did, but Father? Well, he only loved himself. Father says the boy is a weapon against those who stand in opposition to humanity, while the rebellious Undersider dissidents believe the child to be the second coming of a mythological savior from the past. Haunted by dreamlike memories of a life he never lived and hunted by the man who created him, the boy must choose what and who he will be, and bring this chapter of his life to a close.” 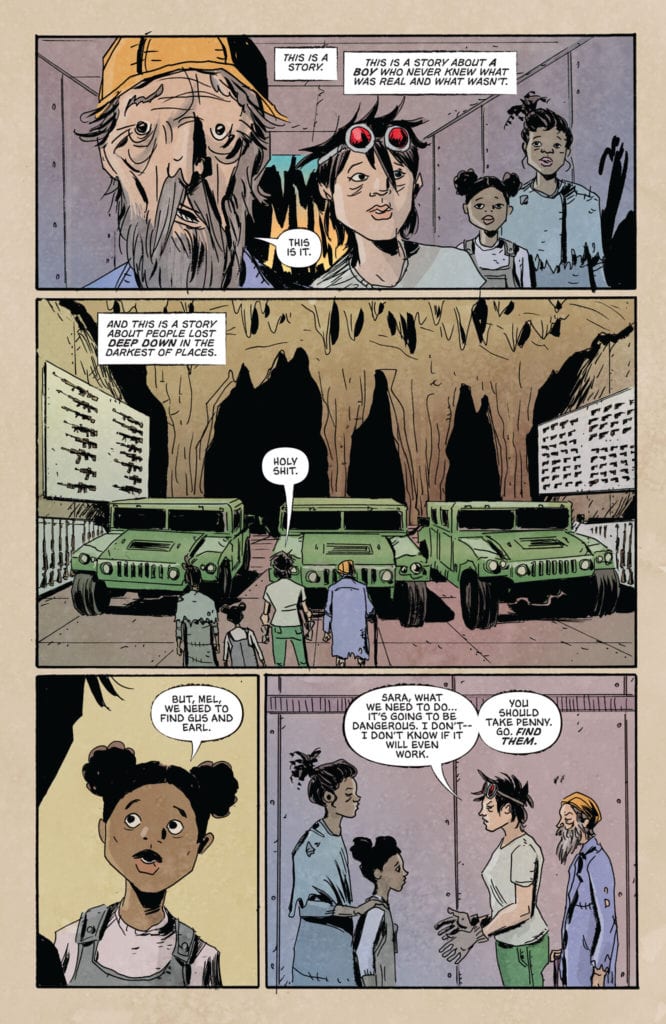 Purely in terms of writing quality, Sweet Tooth: The Return #6 is just as solid a script as any of Lemire’s other chapters of this story. The ending does not feel rushed, the payoffs all feel earned, and the emotional weight of the end feels satisfying and is a fitting tribute to the original series. The nods to the motifs and characters from the prior series are all great nods that will no doubt land in the right spot for long time Sweet Tooth fans. So this all being said, what exactly is my issue with this final chapter – and by extension, the rest of this mini-series? If someone who were a Sweet Tooth fan were to ask me if The Return were worth the read, my answer would be yes – but you don’t have to. It isn’t going to do anything to alter your experience of Sweet Tooth, it’s just a neat and well-made diversion if you wanted to spend some more time in the universe of this tale (a tale which has one of the single best endings of any long-form comic). This isn’t dragging Jeff Lemire or his desire to return to this world; it’s reasonable to understand why he might want to revisit the story that essentially launched his career (and that is getting the Netflix treatment). It’s just I wish there were reason for this story’s existence than it just being more Sweet Tooth. 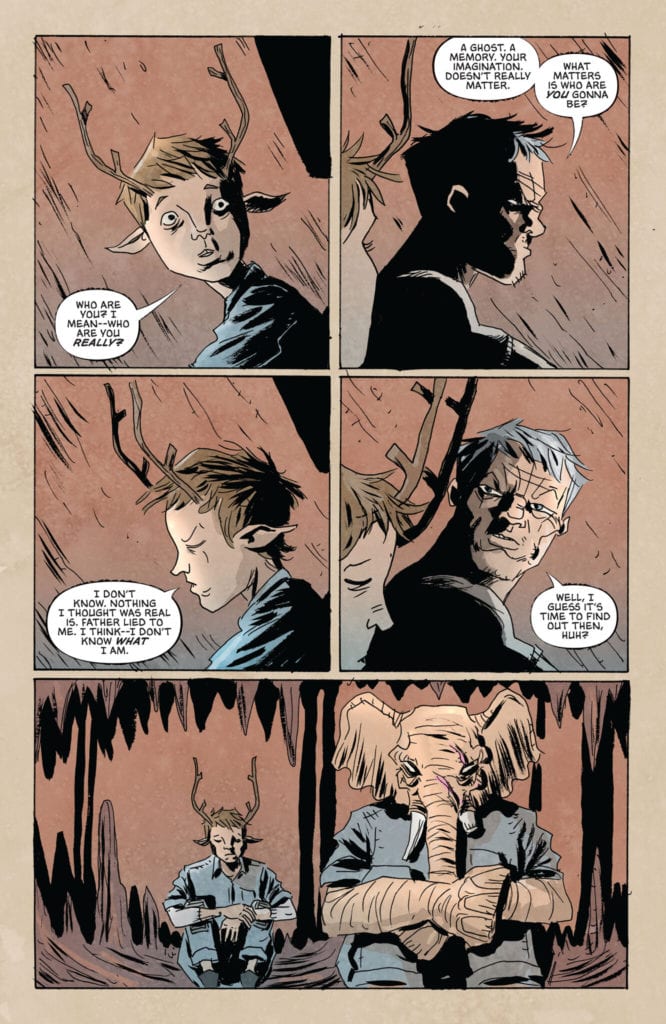 If there’s any single lesson that should come from Sweet Tooth: The Return #6 it’s that no one but Jeff Lermire and Jose Villarrubia should ever be the art team for a Sweet Tooth comic. Lemire’s charming lo-fi pencils convey the setting and characterization in this comic in a way that sells the story’s tone and message perfectly. Some fourteen years after this comic’s introduction, it still blows me away how Lemire is able to craft such relatable, likeable (and detestable) characters with such a rough-hewn and simplistic art style. The watercolors from Jose Villarrubia set the atmosphere for every panel with a mixture of tonal approaches. There’s a warmth and still beauty to the emotional and human scenes, which can switch on a dime to a cold or almost esoteric atmosphere when The Boy/Gus starts visualizing plot points from the world prior. Sweet Tooth has always been a comic known for its unusual but endearing visual work, and the final issue of The Return cements that legacy. 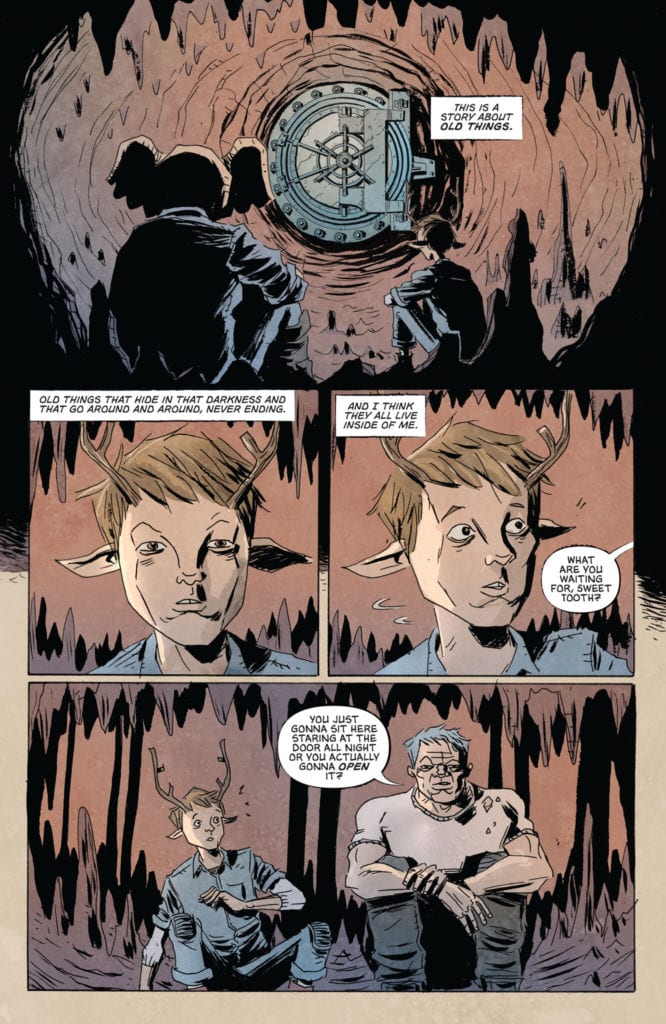 Sweet Tooth: The Return #6 is a well-written and superbly well-made final issue to this sequel-series that finishes this wholly solid mini-series, but ultimately renders the story kind of unnecessary. The plot and characterization that Lemire put on display here is up to par with the rest of this work and even the original Sweet Tooth as a whole, but it fails to make itself a necessary sequel in any way outside of it just being some more Sweet Tooth. His and Jose Villarrubia’s visuals are brilliantly charming and match up perfectly with the original series. If you’re a fan of the original comic, then this is a solid recommendation if you just want more of Lemire doing that thing he does so well but from a different perspective. Be sure to grab this final issue when it hits shelves on 4-13!

An entertaining and emotionally impactful final chapter that almost paradoxically renders this entire sequel-series inconsequential.Review: SWEET TOOTH: THE RETURN #6 - So What Was That All About?