Review: SUPERMAN #13 Takes Us Into Jor-El’s Past

Brian Michael Bendis continues retelling the events of Jor-El’s shady past in the seventh installment to The Unity Saga: House of El storyline. In this issue, readers witness the distressed scientist attempting to convince the Science Council of Krypton’s members to take action against the planet’s impending destruction. But when his requests fall upon deaf ears, Jor-El must find a way to convince them of the danger lest his people, and family, are wiped from existence.

Most Superman fans know how the none of the leaders of Krypton believed Jor-El’s concerns were worth investigating. However, Bendis dives deeper into this origin story. Readers witness the lengths the scientist is willing to go to save his people, even to the point of verbally threatening these beings who hold so much power over him.

We also see how this enormous burden affects his personal life. Jor-El’s wife does her best to ease his mind through calming words and an appeal to their infant son. It is through these interactions that Bendis gives the crisis real weight as readers sympathize with a man who cares deeply for his endangered family.

Jor-El’s desperation skyrockets when one of the Council members asks him about Rogol Zaar, the galactic villain who readers will remember was involved in Krypton’s destruction. But the Council gives no further information regarding the matter to the scientist’s displeasure. His desperate attempts to uncover this mystery throughout the rest of the story will leave readers on the edge of their seats.

The creative talents of Brandon Peterson, Ivan Reis, Joe Prado, Alex Sinclair, and Dave Sharpe make this one of the most visually stunning issues in this series’ lineup. Reis and Peterson’s pencils capture the details often overlooked in many character illustrations, which are beautifully outlined by Prado’s inks. And with Sinclair’s bright, bold colors, one feels as if they’re in the midst of Krypton’s Science Council. 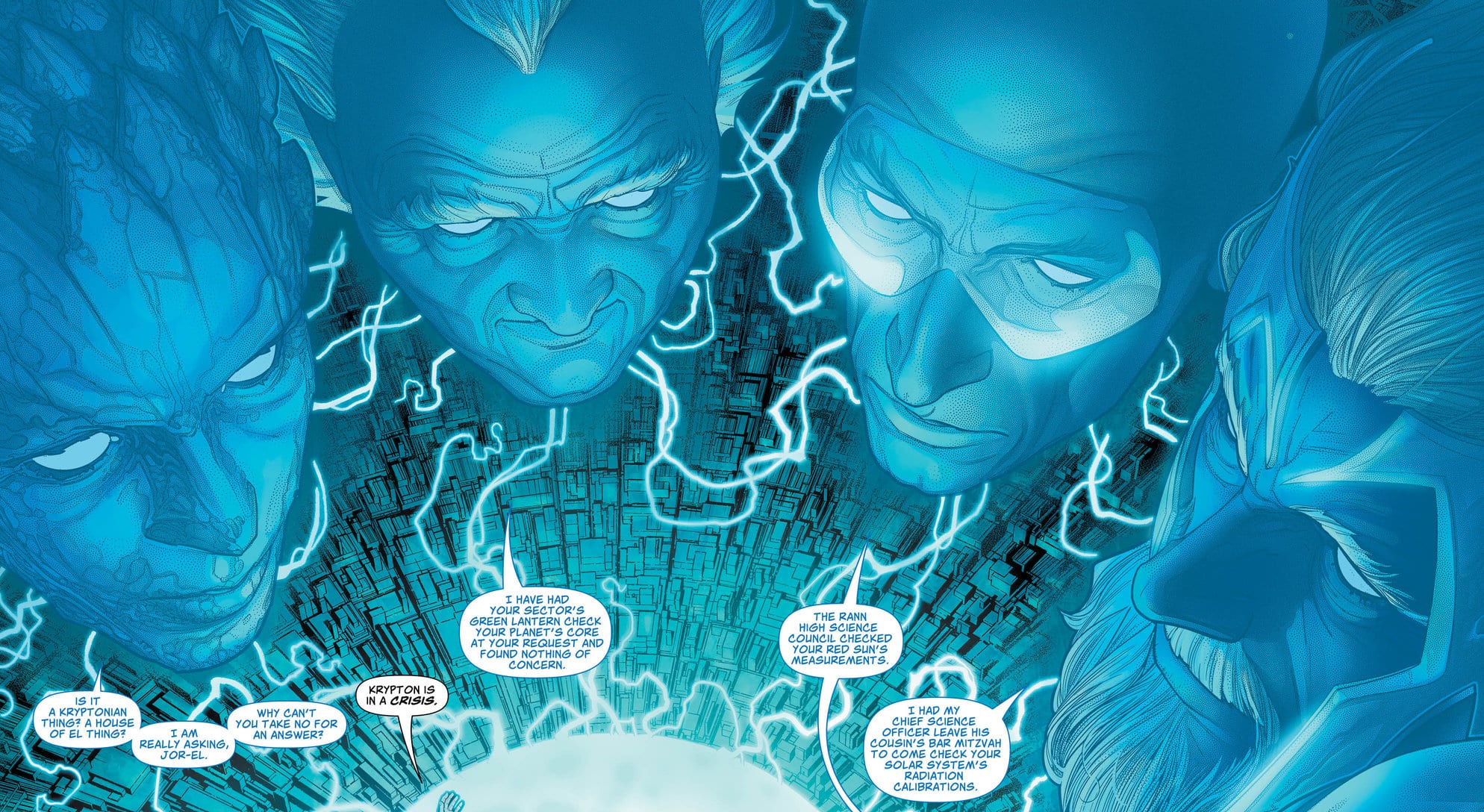 One of the other great features of this book is Sharpe’s clear distinction’s between the Science Council member’s dialogue and Jor-El’s. Using a bright blue font for the other members’ speech allows the reader to imagine electronic sounding voices, signifying the edges of the galaxy from which they’re communicating.

Reis, Prado, and Sinclair’s main cover features Superman leading a host of alien races against the one force who has made their lives miserable: Rogol Zaar. This establishes the sentiments of the characters in the issue, though gives no indication of Jor-El’s prominent role.

Jessica Chen’s variant cover, on the other hand, decides to use her illustration to cast light on Lois Lane, which is most likely due to her newly released comic line. It’s a nice reminder that the heroine is still fighting her own battles on Earth whilst the chaos in outer space rages on.

SUPERMAN #13 grants readers a look into the politics that lead to Jor-El’s request’s rejection. Only time will tell how Kal-El will lose this information in the battle against Rogol Zaar ahead.

What did you think of this issue’s retelling of the events leading to Krypton’s destruction? Let us know in the comments below!