Tom King and Bilquis Evely team up for a Kryptonian sword & sorcery revenge quest in Supergirl: Woman of Tomorrow #1. With colors from Mat Lopes and letters from Clayton Cowles, this opening chapter is gifted with a thoroughly imaginative (but slightly overwritten) script and Evely’s ever-incredible visual work making this a unique and intriguing first issue in this new take in the world of Supergirl.

Kara Zor-El has seen some epic adventures over the years, but finds her life without meaning or purpose. Here she is, a young woman who saw her planet destroyed and was sent to Earth to protect a baby cousin who ended up not needing her. What was it all for? Wherever she goes, people only see her through the lens of Superman’s fame. Just when Supergirl thinks she’s had enough, everything changes. An alien girl seeks her out for a vicious mission. Her world has been destroyed, and the bad guys responsible are still out there. She wants revenge, and if Supergirl doesn’t help her, she’ll do it herself, whatever the cost. Now a Kryptonian, a dog, and an angry, heartbroken child head out into space on a journey that will shake them to their very core.” 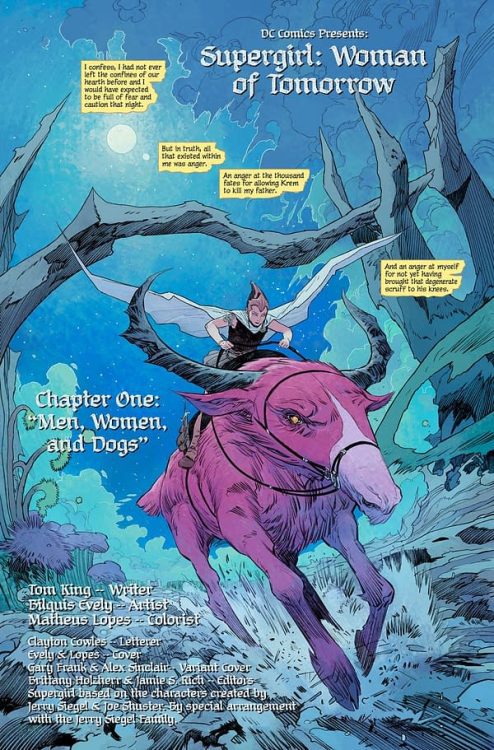 With Woman of Tomorrow #1, Tom King places Kara Zor-El in a situation I doubt any other writer has ever gotten the chance to address: what is she like if you pull her out from behind Superman’s shadow? We find Kara on a distant planet with a red sun just trying to be by herself before being pulled into a young warrior-in-the-making girl’s quest to avenge her father. Kara is presented in this comic as a sort of mythic being, but not in the way she or her more famous cousin are typically framed. She comes into this girl’s life in a rather embarrassing moment while trying to get away from the “Supergirl” name. This comic reminds me of a sword and sorcery/hack and slash adventure tale for numerous reasons (which I will cover), and the first is the sort of mythic status Kara is given by this young girl who is also our narrator. Her presence here is very similar to how Conan and Red Sonja are written in their respective stories, thrust into a cause for reasons that are almost entirely their own. The entire premise of humanizing Superman by depowering him is a worn out cliché at this point, but with Supergirl very little has been attempted to really dig at her character. Her arguably most well-known appearance in her publication history is in Crisis On Infinite Earths – where she’s most remembered for dying. This is an opportunity for King to discover and invent who Kara really is as a person, separate from the pressure of being known only as Superman’s cousin.

Stylistically, the writing here is compelling and entertaining – if not a bit much for an entire comic. The protagonist, and all of this strange planet’s denizens, speak in a long-winded high-fantasy dialect, resulting in large passages of dialogue on every page. This is obviously part of King’s setting up this comic’s connection to the sort of stories that he’s pulling influence from. While I tend to enjoy this kind of writing, and while I do think it works to an extent here, it does reach a point fairly quickly where it becomes a bit too much. I actually quite like the idea of an alien race who all speak like they’re on a planet created by Tolkien and Robert E. Howard. However, reading pages of this dialogue in an inherently visual medium does get to be a chore. Fortunately, the actual plot content of the writing is very engaging thus far, and this issue’s considerable word count wasn’t enough to keep me from wanting to see what else this story has to offer. 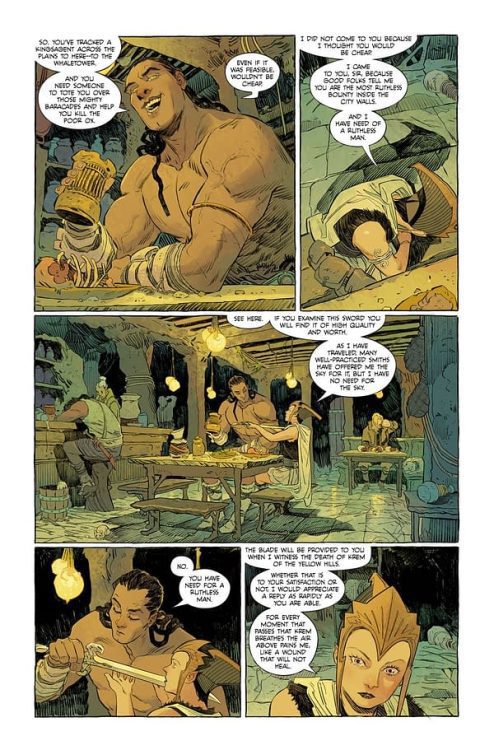 The most striking feature of Supergirl: Woman of Tomorrow #1 is of course the visual work of Bilquis Evely and colorist Mat Lopes. The same team behind The Dreaming now lends their talents to this hyper-imaginative superhero book in absolutely grand fashion. Evely’s pencils are a sea of detail, with her thin linework crafting intricate character animations and designs for a cast of very few (there are only 5 unique identifiable characters in the entire issue) that are all memorable in how they are drawn. From our protagonist’s youthful yet dignified determination to Kara’s wide range of emotions, the actors in this comic have internal journeys that play out across their faces in ways that make them instantly relatable. The environment of this alien world is a striking setting as well, with features that are familiar enough that they would be recognizable for Earth settings in a fantasy tale – were it not for the colors (more on that in a moment). Evely’s panel direction is much more reserved that her work in The Dreaming, which constantly challenged the conventional forms of panel direction. This issue takes a more standard approach with its organization, in a manner that is clean and easy to follow. The beauty that Lopes’s colors give this comic is absolutely stunning, and sets the audience firmly on the ground in this gorgeous alien setting. The light greens, pinks, and reds in this world’s foliage and atmosphere, as well as the litany of skin tones and shadings used on the characters, illustrates a deeply vivid visual experience for this comic. The lettering from Clayton Cowles is solidly conventional, with a naturalistic sense of font changes and italics to hone the reading experience into something that perfectly captures the tone of the narrative and dialogue. This is a brilliant looking comic book, and I would expect nothing less from this artistic team. 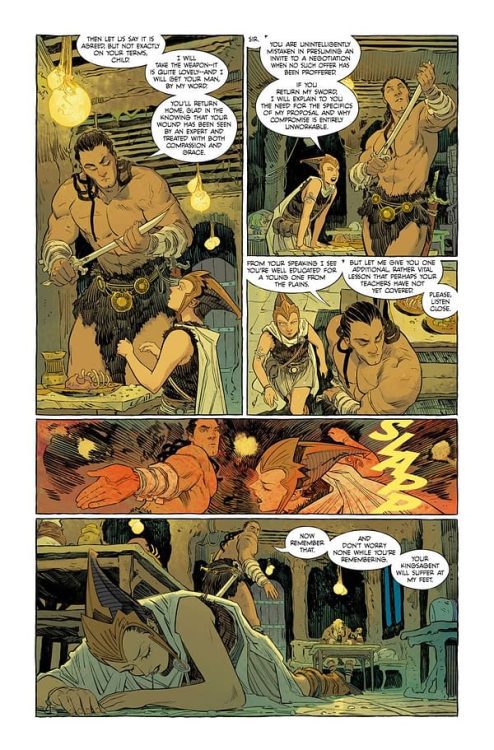 “Supergirl: Woman of Tomorrow” #1 is a delightful and stunning debut issue. While it may be a bit long-winded, Tom King’s script captures the essence of a classic genre and fuses it with a superhero story for a character journey that needs to be discovered. The visuals from Bilquis Evely and Mat Lopes are beyond gorgeous, bringing this world and these characters to life with emotional complexity and vast beauty. Don’t miss this new series when it debuts on shelves on 6-15!

Tom King and Bilquis Evely craft a stunning and unique (if not a little long-winded) opening issue that feels like a story that needs to be told. Review: SUPERGIRL: WOMAN OF TOMORROW #1 – Savage Sword of Kara Zor-El