REVIEW: SUICIDE SQUAD #8 Gets Stuck in Its Own Head

Written by Tom Taylor, with art by Daniel Sampere, colors by Adriano Lucas, and letters by Wes Abbott, Suicide Squad #8 gets stuck in its own head. In a series that is so strong, issue 8 stands out like a sore thumb. Despite some genuinely great moments, this issue is mired by an uncharacteristically awkward script.

It’s always tough when you read something and can’t stop thinking about how one person wrote it. Taylor is typically very good at avoiding this pitfall. His characters have unique voices, and his plots have a joyful randomness. But Suicide Squad #8 feels like one person talking through many different mouths. In the beginning, Wink asks where Zoe is. When Floyd tells Wink that Zoe’s out playing with Dogshot, Wink says: “Zoe named the puppy Dogshot?” “Yes,” Floyd replies. “That’s the best.” Wink says. Honestly, who doesn’t love a puppy called Dogshot joining the group? It’s incredible. But Taylor, essentially complimenting his own writing, cheapens the novelty of it a little. When we follow the story of Wink and the Aerie, we arrive at some similar problems. Their conversation back and forth is awkward, but more because we’re just a slight bit behind Taylor’s thought process with each line. Perhaps it’s that Wink thinks ten steps ahead of everyone else, but Wink’s lines feel slightly out of joint. Similarly, when a character says to Kord, “Someone will stop you,” his response is, “Someone, hey? You couldn’t come up with a more specific threat?” It feels like a joke we’re not in on, a beat that didn’t quite land. Saying “someone will stop you” feels normal, and Kord’s response feels awkward and strange.

That said, the story of Wink and the Aerie getting to know each other is undoubtedly a highlight of the series so far. Despite some awkward lines, we get a real sense of their love for one another. Taylor doesn’t allow for the darker sides to their origins to detract from the fun or the humanity.

Sampere’s art is wonderfully playful in this issue. It’s a joy to see him mess around with what he wants to show, and what he wants to keep hidden. Mostly because Sampere always seems to make the right decision. When the Aerie is locked away in a cell, they cover themselves with their wings. It’s a little odd to be hiding in an empty cell, yet the fact that the Aerie feels so vulnerable that they’ll even hide when they’re alone in a locked room speaks volumes. Later, when we get a brief cameo appearance from Croc and KGBeast, members of an earlier version of the Suicide Squad, Sampere brilliantly swerves away from giving us a real sense of their size.

The first time we see them enter the room, they’re in the background, and their relative size remains unclear. From then on, we mostly see them in parts — Croc from the waist up, looking huge and daunting. We see close-ups of KGBeast’s gun arm or Croc’s gargantuan foot coming into panel briefly to wreak havoc. Not knowing how large these characters are creates an added layer of fear. Sampere knows he can’t make them loom as large on the page as they will in our minds, so he lets us fill in the blanks.

Lucas keeps much of this issue feeling light and fun, despite what may be happening. He colors moments of danger in bright yellows, and the respites between in cool blues. It gives the issue a rhythm, and the fight scenes a sense of spectacle. As the Aerie and Wink have a showdown with an old version of the Suicide Squad, the scene is cast in a pink hue. The whole scene is both terrifying and beautiful at the same time—kind of like the Suicide Squad themselves.

It’s interesting to see Lucas use the same colors for starkly different things. A dark cell, colored in light blues, goes from being depressing, to comforting and safe. The orange and yellows of danger in battle is then used to show the peace of a sunset or the explosiveness of a kiss. Each time Lucas shifts from one use of a color to another, we get a sense of the scene being reclaimed. The Aerie and Wink refuse to let the Aerie’s cell be a place of depression; it becomes their own little refuge. It gives us a sense of the layers to their relationship. Their relationship was built on a foundation of pain that they have reclaimed and turned into something beautiful. 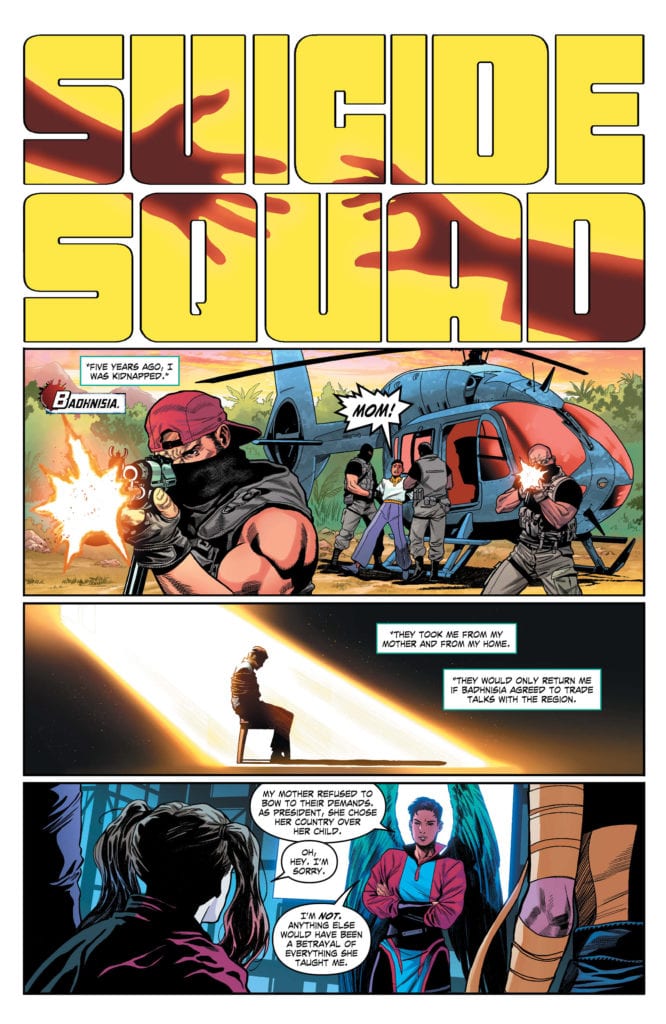 The lettering keeps its flair in this issue. It’s interesting to see Abbott lettering moments of violence against our protagonists now. Thus far, most of the gunshots and explosions have happened in times of giddy chaos. But now, as we see the Aerie and Wink at the butt end of each sound effect, these moments feel different. That doesn’t stop Abbott though. Gunshots, explosions, tasers and breaking bones are all given the fun theatrics we’re used to. We just become more divided about how fun the moment really feels to us.

One brief sound effect does seem a little odd, though. When the Aerie and Wink are in the air, we see the sound effect of something approaching. The sound effect appears in the corner of the panel and disappears behind Wink’s arm. There’s just not quite enough space given to this particular sound effect for it to be noticeable, and not look like a misprint. Altogether, Abbott is an incredibly experimental letterer who is always trying new things, so it’s easy to take the moments that don’t work when there are just so many that do.

Suicide Squad #8 might be too self-effacing; it might be too self-aggrandizing. Whatever it is, it’s certainly too trapped in its own head. The creative team gets mired in commenting on what’s happening, detracting from what is otherwise a truly great story. If this were any other series, the problems with this issue would be completely unnoticeable. But this is Suicide Squad, and this series has gotten us used to a truly remarkable level of entertainment. Suicide Squad is a blast, and you can bet this creative team will find their footing in the next issue. They always do. Pick up Suicide Squad #8 at a comic book shop near you!

SUICIDE SQUAD #8 falters in this issue, maybe because it has been such a strong series so far. The creative team still manage to tell a compelling story, but they are mired in commentating as they storytell. REVIEW: SUICIDE SQUAD #8 Gets Stuck in Its Own Head