It might seem a little unfair to measure this new Suicide Squad run up against the last one. Tom Taylor and Bruno Redondo’s run on Suicide Squad is a tough act to follow. But that’s what makes this issue of Suicide Squad so great. It nods to Taylor and Redondo briefly, then boldly does its own thing. Well, kind of. Writer Robbie Thompson, penciller Eduardo Pansica, inker Julio Ferreira, colorist Marcelo Maiolo and letterer Wes Abbott present a version of the Suicide Squad that feels classic. They go back to basics, connecting to all of the things that make Task Force X who they are. 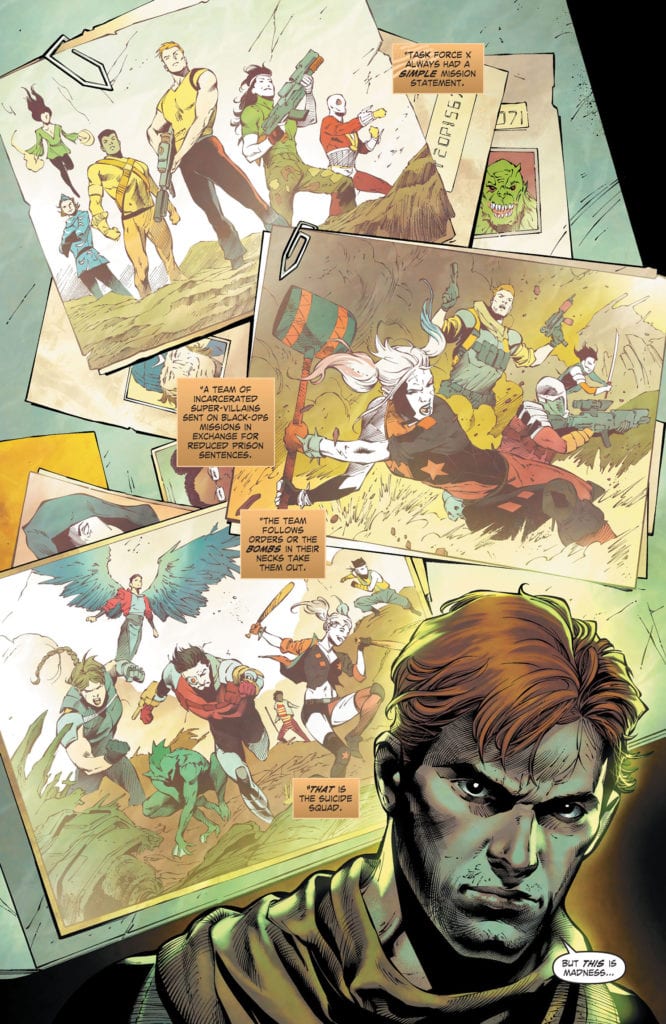 Thompson doesn’t pull punches in this issue. He makes it abundantly clear that Suicide Squad is going to be a revolving door for characters. Some characters, like Peacemaker and Amanda Waller, are going to be mainstays. But everyone else is fair game. Thompson has us worried about the safety of these maniacs right off the bat. And he creates such an interesting balance of chaos and order. We get the relatively calm conversations between Waller and Flag, juxtaposed against prison riots. Thompson highlights the divide between “the management” and “employees.” Waller can be calculating in her decisions, but it’s still going to mean Task Force X are going to get their hands dirty.

Pansica and Ferreira are constantly playing with their page layouts. The page layouts also highlight the dueling natures of Task Force X. They are a group that is full of violence and chaos, but they’re pretty organized and nonchalant about it. For the most part. In one scene, Pansica and Ferreira show a fight breaking out in a prison. We see a lopsided panel in one corner, as a character dons their mask to join the fight. But the fight itself seems both wild and contained. As Peacemaker and the character fight people around them, the panels continue in a diagonal line down the page. It feels organized but off-kilter. It’s as though Peacemaker and the character balance each other out into some strange, twisted medium. Pansica and Ferreira do a fantastic job of making this issue feel wild, and showing that the characters don’t seem all that fazed.

Maiolo takes a page out of Future State: Suicide Squad‘s book. The color palette seems muted and pale for the most part. But when there’s violence, the page lights up. We see a huge red page of a character stabbing someone. And when another character is electrocuted, the page is a brilliant blue. On one hand, the characters seem to be reveling in the violence. These are the bright moments for them. Everything else in their lives is controlled by Waller. But, at the same time, these moments also read like they’re breaking through the haze that surrounds each character. These untouchable criminals are actually being fazed every once in a while. Pansica and Ferreira certainly make them look nonchalant, but Maiolo is telling us these acts of violence are cutting through. They look like they’re shaking it off well enough, but maybe they’re not. 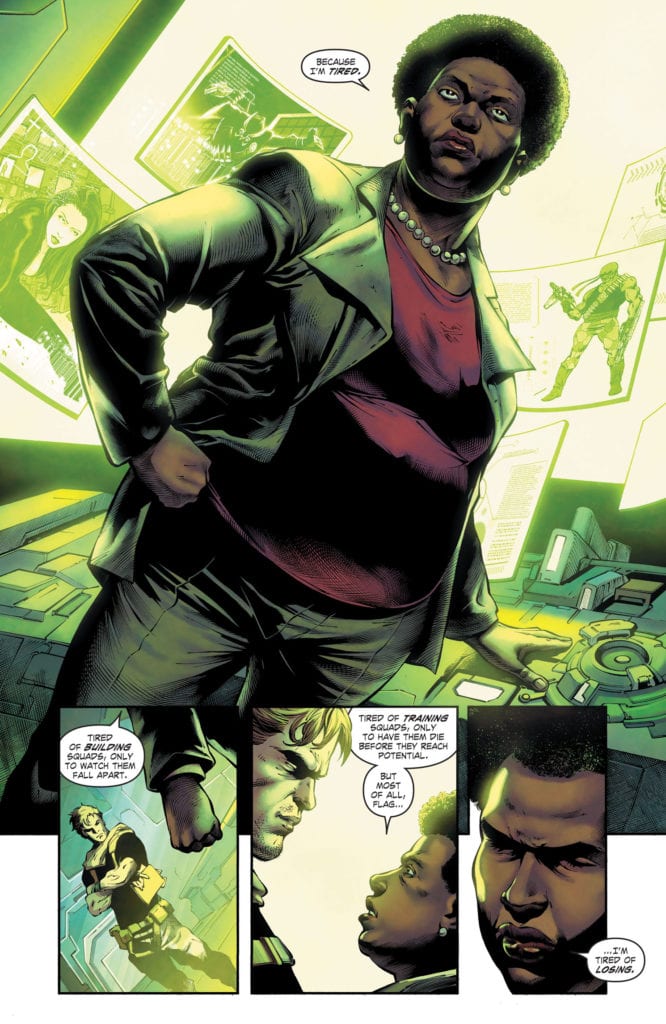 Amanda Waller has got to be a fun character to letter. She has such a clear cadence and rhythm. And Abbott nails it. Every time she speaks, Abbott makes her sound so laid back. She takes her time to say what she wants. She never speaks in large chunks. Abbott rarely has her say more than seven words at a time. And her dialogue is given so much space on the page. Everyone seems so scared of her, even Rick Flag. The only time one of her lines overlaps someone else’s is when she’s speaking to Peacemaker. Abbott shows us that Peacemaker and Waller are birds of a feather. Neither is scared of the other and both are willing to make some messy decisions.

DC Comics' SUICIDE SQUAD #1 is an exciting start to a series. It's fun, chaotic, violent, and has all the staples of being a classic SUICIDE SQUAD story. This creative team clearly loves the work they're doing. That much is clear from every panel on every page.Review: SUICIDE SQUAD #1 Goes Back to Basics