DC Comics’ Strange Adventures continues to show the complicated mess of war. Much like Edwin Starr, writer Tom King, artists Mitch Gerads and Evan “Doc” Shaner, and letterer Clayton Cowles, don’t think war is good for much. Just as in my last review, I’m no longer reviewing each storyline of Strange Adventures individually. Strange Adventures #8 delivers a script full of important beats and these storylines continue to meld into one tantalizing tennis match.

King was once writing two stories. At least, each storyline didn’t have huge parallels that were clear on a first read. King was writing about different eras, writing in different tones. Now, with the Pykkt war raging in both storylines, on Rann and on Earth, King presents us with some very similar events. On Rann, Sardath has captured a Pykkt warrior. On Earth, Mr. Terrific has done the same. And suddenly, we’re seeing the differences in our characters highlighted. When Adam Strange is called in to question the warrior, we see the contrast between him and Terrific. But King also shows the similarities. Terrific is meant to be the morally superior character, the one investigating Adam. We’re left wondering if war has made Adam cruel, but we’re also wondering if it’s currently doing the same to Michael Holt. 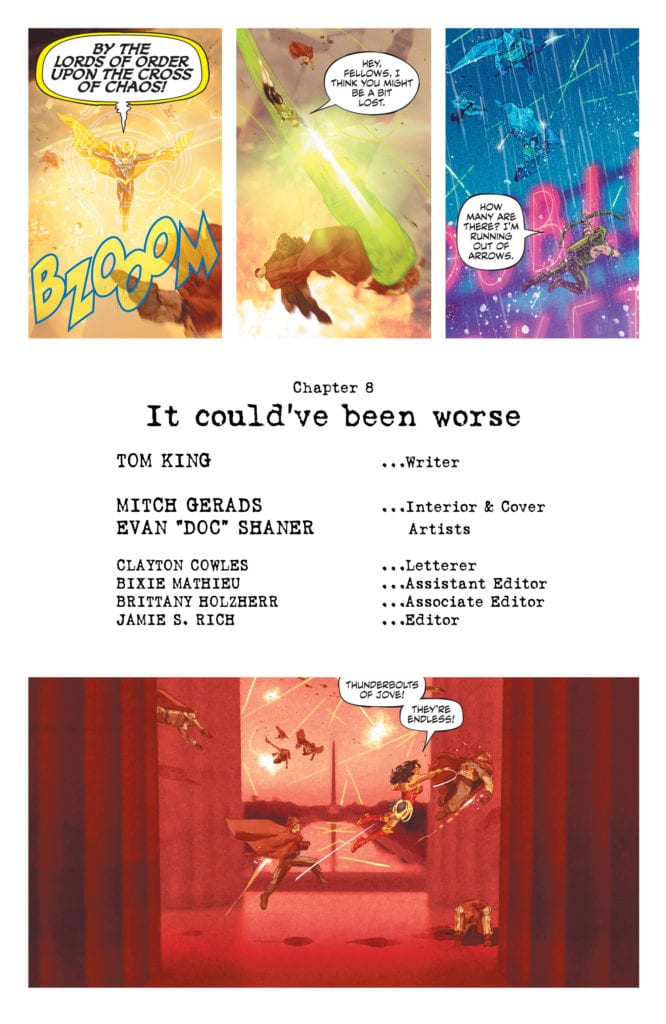 Gerads does a wonderful job of showing both the immensity of war and how up close and personal it can become. At times, he shows us scenes of characters standing in wreckage. These heroes, larger than life to us, look like dots on the page. They’re overwhelmed by the destruction. But later, we see the punching, the stabbing and choking of war in close quarters. We see the expressions on the faces of those causing violence and those receiving it. We see the humanity that’s at stake.

Meanwhile, Shaner mostly shows us the delicate nature of peace. Everything is quite up close and personal with Shaner’s art. Adam and Alanna hugging, the look on Adam’s face as she washes him, the anger in their eyes as they fight. But Adam is among family. His fists should be lowered, his smile should be broad. Instead, his eyes are haunted. Shaner shows us that just because someone might have gotten out of a war alive, doesn’t mean they’re not dying on the inside.

Both Shaner and Gerads use lots of reds, blues and yellows. It’s not lost on them that red and blue is often associated with America. They’re writing about characters who see themselves as above the law. Their way is the right way, simply because. Yet the yellow is the equalizing factor. It’s the fire of destruction. As the Flash looks over a decimated landscape, the sky is yellow as the ash catches the glow of the flames. But in Shaner’s storyline, the yellow isn’t fire or destruction. At least not overtly. The yellow is found in Adam’s hair and beard, and on his daughter’s shirt, even his gloves. It begs the question, what more destruction is Adam going to bring about? And what part will his daughter play?

Cowles perfectly creates a sense of pace in this issue. When Alanna begins to talk to Adam about how the war is affecting them, Adam’s response is long winded. He goes into a speech that feels evasive. “I’m fine,” Cowles places in a tier below. It gives the moment space to breathe, to really highlight that it’s a lie. But it’s still tacked on to a long speech, like he’s trying to hide it among other words. And when Terrific fights a Pykkt warrior, Cowles uses the same method to show how capable Holt is. He’s talking throughout the fight, and he’s taking the time to give his dialogue rhythm and pacing. It’s nonchalant, while he’s fighting for his life. That’s because Michael Holt knows exactly who’s going to win. 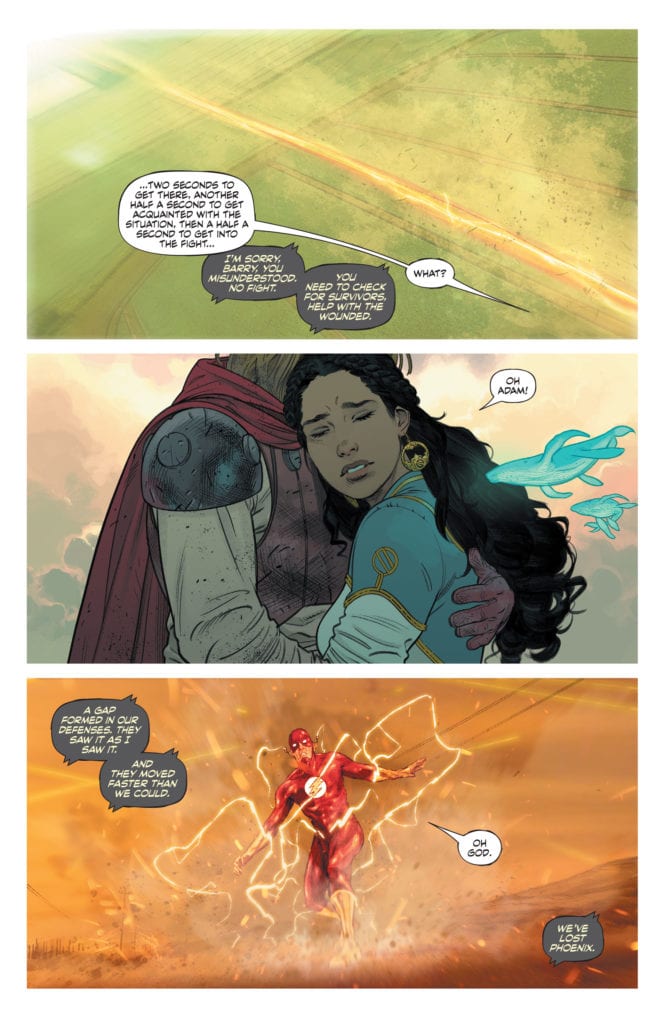 DC Comics’ Strange Adventures is going stronger than ever. With four issues to go, this series is upping the stakes to reach its conclusion. It’s a subtle meditation on the power that war has over our humanity and our will to live. But it’s also about how fighting for your life can leave you haunted and empty. Pick up this fantastic new issue of Strange Adventures, out from DC Comics January 26th, at a comic shop near you!

DC Comics' STRANGE ADVENTURES is going stronger than ever. With four issues to go, this series is upping the stakes to reach its conclusion. It's a subtle meditation on the power war has over our humanity and our will to live. But it's also about how fighting for your life can leave you haunted and empty.Review: STRANGE ADVENTURES #8: "War! Huh! What is it Good For?"