REVIEW: STRANGE ADVENTURES #6 Comes Back to Its Characters

DC Comics’ Strange Adventures has been an incredibly strong series. Most of my reviews thus far have given it a 5/5 on all fronts. But Strange Adventures #5‘s score dipped quite a bit in the overall rating for one simple reason: Strange Adventures got political. Before I go further, I should say I’m a huge advocate for politics in comics. Art should discuss current events and shouldn’t solely serve as a form of escapism. Politics in comics in and of themselves are not a bad thing. But there’s a big difference between writing a story to make a political point and inserting a political point into a story that serves the plot.

Strange Adventures #5 felt like it had more to say about current events than it did its own characters. Thankfully, Strange Adventures #6 course corrects masterfully. Writer Tom King, artists Mitch Gerads and Evan “Doc” Shaner, and letterer Clayton Cowles manage to continue their discussion of our political climate without sacrificing their story. They focus in on their characters and turn big ideas into a deeply personal struggle. 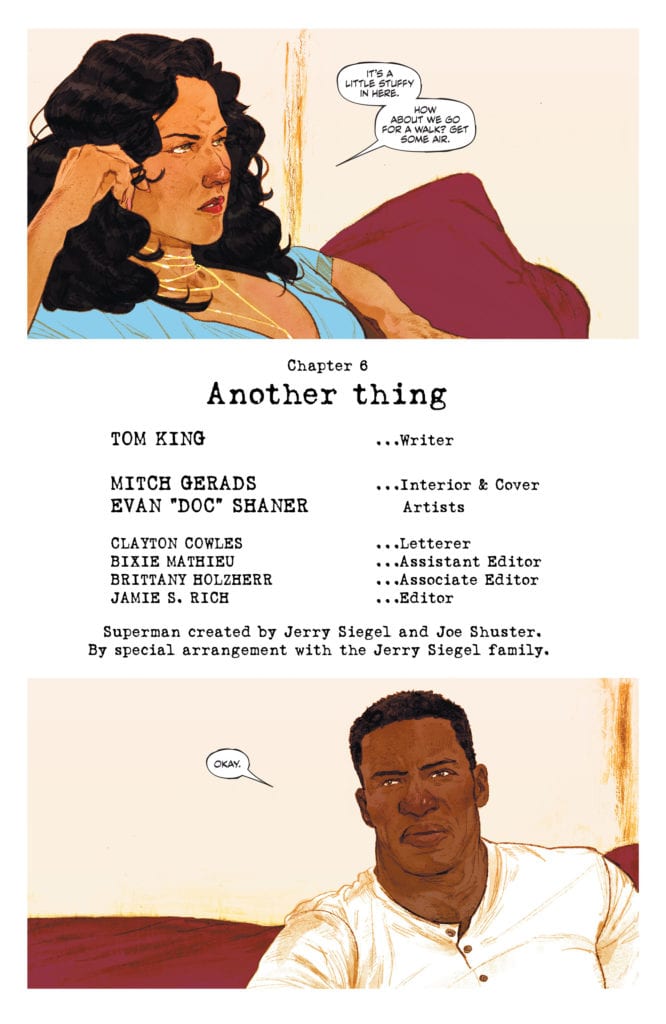 King’s modern-day scenes are surprisingly laid back. Mister Terrific, who has thus far shown a tireless energy for the truth, and Alanna, who often comes off as the evil puppeteer, come face to face. Despite what they may think of each other, King doesn’t write a fight. Instead, he has them go out for drinks and a chat. Part of the pitfall of writing something that focuses on modern politics is that a writer can become a slave to what happens in the political world. Their script becomes commandeered by current events. But King takes a step back and says, “What do I wish were the kinds of things happening today? How could things be different and better?” King’s alternate version of events hones in on what makes these characters tick. Their conversations, and even their bonding, ups the stakes and complicates the plot with the messy strings of human experience.

What’s most noticeable about Gerads’ art in this issue is how it differs from previous issues. The power dynamic between Adam and Alanna is impossible to miss. Alanna is almost always pictured bigger than Adam, often above him. But Mr. Terrific is not Adam Strange. In Strange Adventures #6, Terrific and Alanna are on equal footing. One commands the page just as much as the other. They walk together through the snow, side by side, and at the same pace. When one is given the spotlight or a close-up, the next page follows with a close-up for the other. Gerads makes these two feel like equals.

Similarly, Gerads colors Alanna and Terrific in many of the same tones. They’re either in the warm color palette of Terrific’s home or cast in the blue light of a snowy night. Wherever they are, they’re colored with the same warm or cold hues. But when Alanna walks Terrific to his doorstep, something shifts. The whole issue, they’ve seemed like kindred spirits. Maybe it’s a plot by Alanna to get Terrific on her side, maybe it’s a genuine connection, but either way, Terrific makes it clear he’s unmoved. As he steps into his home, he’s suddenly colored in a completely different tone. The lights of his home make him stand out on the page, against the cold blues of the night. And when we shift back to Alanna, she’s still blue. It’s a sudden change that reminds us that they are still diametrically opposed to whatever communion these two might find.

Alanna is a character who is very sure of herself. When she speaks, she either speaks in short bursts that get straight to the point, or in large chunks, only broken up slightly to provide a rhythm and cadence to her speech. But as Strange Adventures #6 progresses, Cowles begins to break up her dialogue more and more. She begins to seem unsure of what she’s saying, or unsure how much she believes it. Terrific, on the other hand, only seems to speak in short bursts, with few exceptions. His confidence and efficiency in speaking his mind lead to Alanna’s own confidence wilting. Alanna knows more than she lets on, but just maybe she’s beginning to worry that Terrific does too. 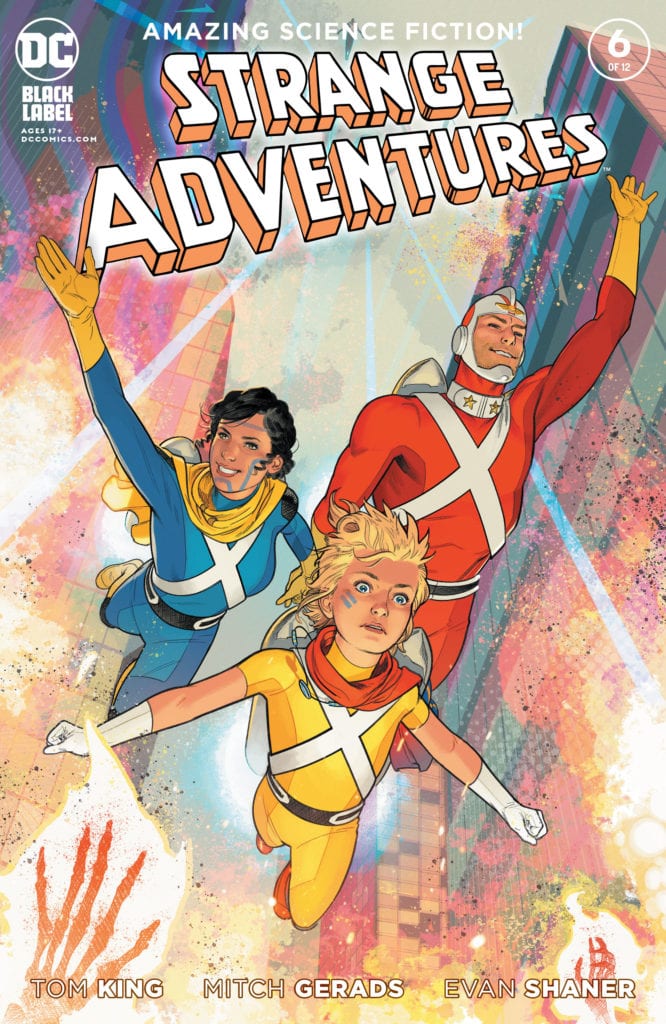 In the pages of Adam’s autobiography, Strange Adventures, King shows the Rann Pyykt war as Alanna and Adam saw it. It’s brutality filled with smiles and heroism. Alanna and Adam gun down Pyykt soldiers one by one with very little energy spent towards trying to discuss terms of peace. Early on in the chapter, Alanna makes the assumption that the Pyykt can speak Rannian and choose not to. It’s based on this flimsy logic, which cannot be confirmed or disproven since we can’t, in fact, understand the Pyykt, that Adam and Alanna feel they’ve earned a license to kill unreservedly. But by making it seem like they’re the underdogs, fighting for their lives, King allows us to see how they could rationalize their brutality. They’re fighting for their planet against invaders that they assure us, over and over again with little proof, are cruel and sadistic. But we just have their word. We’ll have to see what happens if and when the Pyykt makes contact with Earth.

Throughout this issue of Strange Adventures, Shaner depicts a dynamic between Alanna and Adam that we know isn’t true to life. Alanna is forever the submissive wife. She’s smaller than Adam on most pages, often pictured right behind him as a physical representation that she always has his back. At one point, she’s even smiling sweetly up at Pyykt ambassador, the ambassador’s shadow covering her. She is the romantic lead of an action movie in these pages. The beautiful woman who will follow her man to the ends of the earth. The moments that she is pictured above Adam, or looks bigger than him on the page, are moments where she’s encouraging him. Her strength exists to ignite his. Shaner shows us the lies Adam is telling in his book, and they’re familiar. We’ve seen them in blockbuster action movies for decades.

Shaner’s colors confirm that Adam’s book is hitting its “Belly of the Whale” chapter. The colors begin as soft blues and browns. A night of serenity before the battle the following day. When the battle begins, Shaner colors the first scene in warm and bright colors. But as the war continues, the colors become more and more ominous. They begin to darken, looking like a day that’s drifting into the afternoon. And in the final moments, Shaner colors each moment in brilliant purples and pinks. These colors mix together to look like some kind of apocalypse. It’s destruction, but it’s washed in the glow of a planet that’s burning. Shaner somehow makes these moments feel both devastating and beautiful all at once. 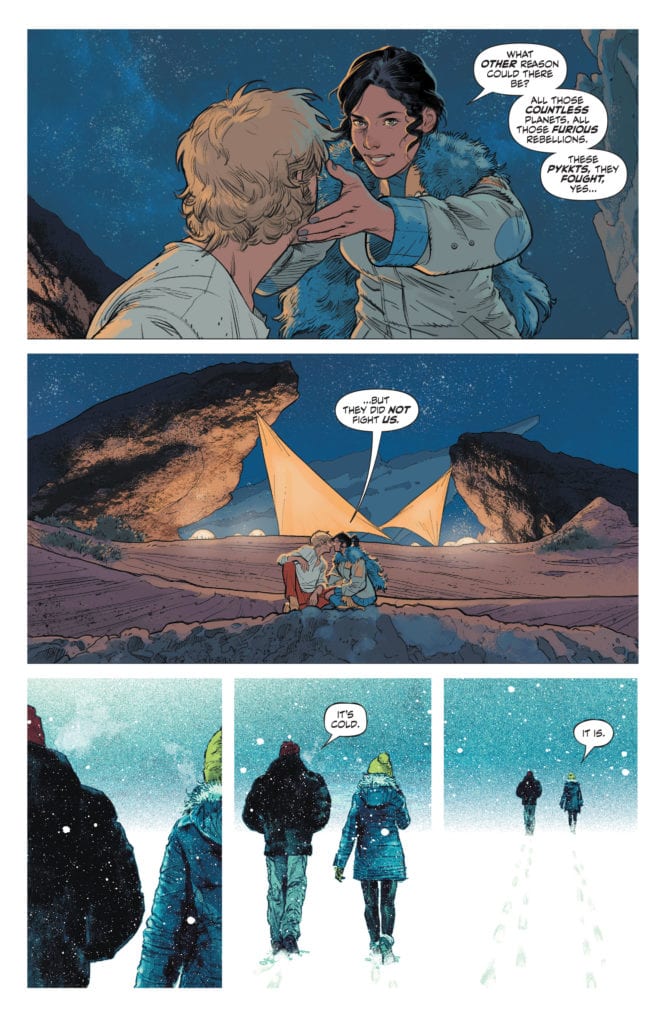 Cowles’ lettering maintains a sense of levity in this chapter. As alien races cross swords and blasters, Cowles’ bright blue and white “pew” noises make the violence seem cartoony. Cowles distracts us from the violence of the moment with big, bold lettering. But shots from the enemy don’t feel as fun. The lettering is less characterized, and they’re outlined in red instead of blue. So when Alanna and Adam are shot at, Cowles distracts us a little less from the violence. If anything, the red of the outline focuses us in on it. Cowles wants us to see this battle as Adam saw it. Adam’s own blasts were good and necessary. But the shots from the enemy were violent and destructive.

Strange Adventures has returned to the beautiful story it’s been telling all along. Instead of getting caught up in political parallels, it allows itself the chance to go outside of political events to explore characters and up the stakes. This creative team delivers another brilliant issue. Pick up Strange Adventures #6, out from DC Comics October 13th, from a comic shop near you!

STRANGE ADVENTURES re-centers on its characters. It isn't hold back by drawing political parallels, but instead dares to tell an alternate version of events that serves its own story.REVIEW: STRANGE ADVENTURES #6 Comes Back to Its Characters