I hesitate to call DC Comics’ Strange Adventures #4 boring. That obviously has some negative implications, which aren’t true of this issue. It is boring though. It’s impersonal and bleak. But that’s because this creative team, writer Tom King, artists Mitch Gerads and Evan “Doc” Shaner, and letterer Clayton Cowles, are making a statement: Sometimes the truth isn’t entertaining. Sometimes doing the right thing isn’t very frilly — it’s just right. This creative team sacrifices nothing in the department of the quality they put forward in Strange Adventures, they just allow the story to slow down and remind us what true life can be like. There are a few minor spoilers, so please read this incredible issue before diving in!

King doesn’t try and spice up the Terrific scenes of this comic too much. There are moments that really stand out. Moments that make you wish you could be best friends with Michael Holt. But the thing that’s so incredible about Mr. Terrific is his unflinching commitment to the truth. So what do we see of his stay on Rann? We see him pouring over alien documents. We see him interview Rannian officials. Sure, he gets a little punchy at the end (in a very badass way) but most of this issue he’s just researching.

Terrific has become a whole new entity in these pages. He’s a force of nature: slow but unstoppable. His complete commitment to his research may not be a source of much action, but it allows us to see what a great choice he is to look into Adam Strange. He doesn’t take no for an answer; when he hits dead ends he breaks right through them. He is a slow train coming, and he’s gaining on Adam inch by inch. 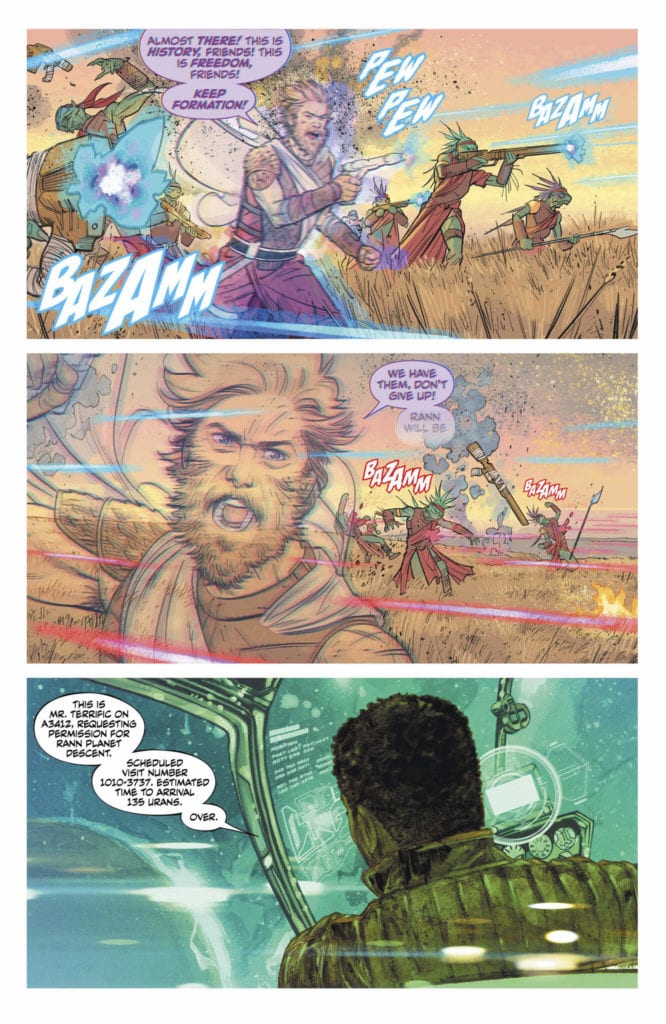 Gerads does an incredible job of making everything on Rann seem unclear. For one thing, we hear over Terrific’s ship’s radio that there will be a landing party waiting for him on arrival. But Gerads zooms out to show us one person standing in a wide-open space. It immediately makes us distrust the Rannians. And Gerads zooming out for the panel pulls us away from the details and makes the moment feel impersonal. In fact, most of these scenes feel impersonal. Terrific looks small on the page, and we rarely get close-ups of his face. With one notable exception.

When Terrific is brought before the Rannians for asking to see Pykkt files, he gets slapped by Sardath. We then see Terrific’s face up close, unobscured, for the first time. But he doesn’t quite look angry. His nonchalance as he slaps Sardath back stops us from worrying. We know, from his face, that Terrific has learned as much as he will from the Rannians. He doesn’t mind burning this particular bridge.

Gerads’ colors tell us all about what’s going on under Rann’s surface. For one thing, many of the scenes are colored using lots of whites. When Terrific lands his ship, the landing area is white and vast. It gives the implication that there are no obstacles to Terrific’s search. But as the scenes progress, Gerads plays with reflections and glares a lot. Bright whites that gleam off of the surface of every panel. It’s as though the Rannians have turned on the lights. “We have nothing to hide,” they’re saying. But in so doing, they’re shining the light in Terrific’s eyes. Their transparency is just an illusion, designed to blind Terrific even more to the truth. But as we see Terrific put down a group of armed Rannians in a cool blue-hued room, we know he’s undeterred, and unstoppable.

Cowles has taken an about-face in this issue. Previously, Cowles almost never included sound effects in his scenes with Gerads’ art. But in this issue, we get plenty large, cartoony letters surrounding Terrific. It feels out of place, until you realize Terrific is entering Adam’s world. This is the world of a space adventurer, the world of cartoon lettering. It still looks alien, when placed side by side with Mr. Terrific. But it should. Terrific is not welcome on Rann, and the lettering working out of joint with his character, which is always reserved, seems to almost be telling him to go home. With every big red letter, we’re reminded Terrific isn’t on his home turf, and this planet rebels at the thought of him sticking around. 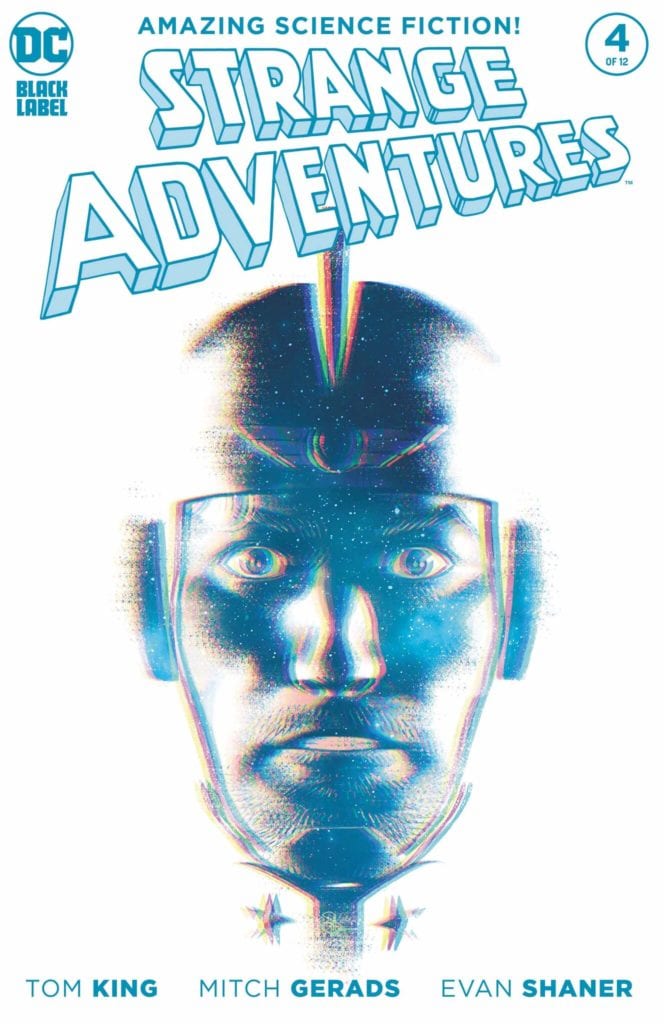 King’s chapters from Adam’s book Strange Adventures take a moving turn in this issue. We get the sense that Adam was actually baring his heart when he wrote these pages. It’s uncharacteristically sincere. It’s the story of him being sent home by the zeta beam, while the Pykkt war is still in full swing. While he’s home he goes to friends in the Justice League and asks for help. But they refuse to bring him back to Rann. They don’t want to get involved. With this, King complicates our interpretation of Adam’s actions.

Sure, we can see how he completely dehumanizes the Pykkt people. They are invaders, and for that reason alone they deserve to die, no questions asked. But the Justice League treat Rann with similar reasoning. Rann isn’t Earth, that’s all the Justice League needs to know to not care. Even with Adam begging for the fate of his people, they seem unmoved. Suddenly, it’s hard not to see Adam’s heart in this. It’s hard to see him as less than human. Even if he is hiding some awful things.

When Shaner first shows us Adam on Rann, he looks majestic. His beard blowing in the wind, in alien armour as he charges across a battlefield. But when we see him again, back on Earth, he looks small. Seeing him so suddenly in his civilian clothes, with his beard shaved and now slowly growing back, he looks a little pathetic in comparison. It’s also worth noting, that most of his panels with Superman and Green Lantern, he’s beneath them. They are literally looking down at him. It’s an isolating experience, and the moments where he does rise up, are moments of him rejecting their input. They are moments of him going off alone.

So when we see him waiting for the zeta beam a second time, he’s all alone in a field. He looks resigned. The beard Adam had on Rann is back, but it means something else now. He hadn’t shaved his beard the first time around because he’d been hiking through the desert to save Alanna. This time, he’s been on Earth. He’s had access to a mirror and a razer. He just didn’t care. So what was once a badge of honor, a mark of his perseverance, has now become a sign of his resignation. But once he gets to Rann, it’s Alanna who is looking up to him this time. She’s the one who restores his hope and gets him fighting again. 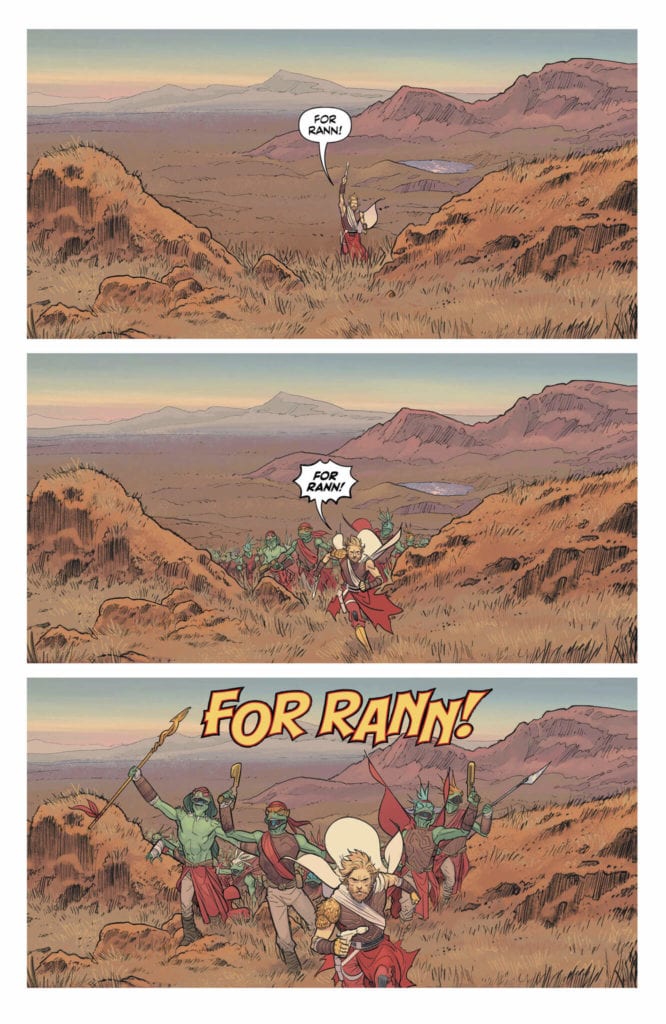 When Shaner is showing us Rann, in the pages of Adam’s book Strange Adventures, his coloration is intoxicating. The landscapes, with deep browns and hues of purple, make you want to dive right into the page. But when Adam is back on Earth, everything has a simplicity to it. An unattractive simplicity. It’s the same simplicity that we hear in Hal’s reasoning for staying out of the fight, or Clark’s explanation for why he can’t take Adam home to Rann. Everything is a little too black and white for these characters, they can’t see the colors in between. They haven’t seen the colors Adam has. So when the zeta beam reappears, the colors are hypnotic and beautiful. You feel pulled toward the page. But what Adam finds once on Rann is the same simplicity. Brown field, white bones. Until Alanna shows up. Then the skies become a glorious dance of red and purple again.

Cowles has completely switched his treatment of each storyline. While Terrific is surrounded by bright sound effects, Adam can’t find them anywhere. The explosions and battlecries before he gets beamed back to Earth are full of flair, but his time in bars and on the moon are nearly silent. It gives us a sense of Adam’s loss of meaning. Just as sound effects teach us how to feel, by how they appear on the page, Adam doesn’t know how to feel about being “home.” He feels so alone and so devoid of emotion. And when he arrives on Rann his feelings carry over at first. We only see the small yellow “Craw, craw, craw” of the buzzards. And he barely says anything once he’s arrived. Once Alanna delivers a rousing monologue to him, he responds shortly “For Rann.” It’s small, and doesn’t fly far from his mouth. It gives us a sense that he just squeaked it out. But it feels all the more sincere for it.

Strange Adventures always delivers. That’s because every page, every panel, is pregnant with meaning. The most “boring” issues aren’t just boring because the creative team ran out of things to say, but because they’re rhapsodizing about the nature of truth and entertainment. There are layers upon layers of meaning in the most innocuous scenes. King, Gerads, Shaner and Cowles are hitting it out of the park with every issue. Pick up DC Comics’ Strange Adventures #4 from your local comic shop August 4th, and prepare to love being bored.

This creative team cares about the truth. They care about HOW they tell a story. And so, this issue doesn't skip around to the highlights. It drags us through Holt's research to remind us that sometimes what's right isn't fun. It's just right.Review: STRANGE ADVENTURES #4 — Boring Truths vs Entertaining Lies