Review: STEP BY BLOODY STEP #1 – A Picture’s Worth a Thousand Words

Image Comics’ Step By Bloody Step #1 isn’t your typical comic. That becomes pretty clear the moment you realize that this script has no dialogue or captions. But, Step By Bloody Step also kind of is your typical comic. It doesn’t treat storytelling differently just because it has no words. It takes on the same objectives as any story, it just does so with images. Writer Si Spurrier, artist Matias Bergara, and colorist Matheus Lopes do as much world building and character development in Step By Bloody Step #1 as in any other comic on the shelves. How do they do it without the help of words? Now, that’s the real question.

About Step By Bloody Step #1 (from Image Comics):

An armored giant and a helpless child. Together they cross an astonishing world brimming with beasts, bandits, and—deadliest by far—civilizations… If they stop walking, the earth itself forces them onwards. WHY? The child can’t ask. She and her guardian have no language, no memory, nothing—except each other. 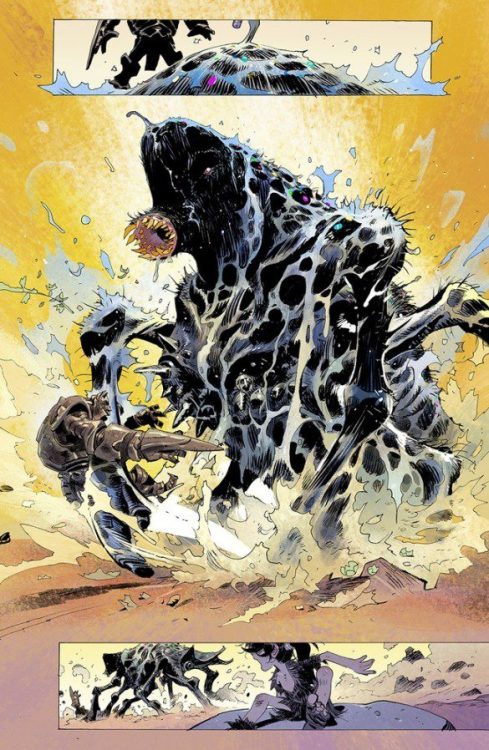 Spurrier’s scripting for this issue is fantastically paced. It’s no coincidence that the title of this story has the words “step by step” in it. That’s exactly how Spurrier approaches his script. We see every little, relevant moment, from picking flowers to dismembering monsters, laid out in a shot-by-shot progression. When Spurrier transitions into a montage, or makes any big leaps in the passing of time, he does so on an entirely new page. That way, we’re never confused as to what is happening or what led us to each new image. At times, the story feels quite mysterious. We see the fantastical landscape these two characters are traversing actually respond to them in magical ways. And the interactions between characters feel meaningful, though we don’t know what it is they’re communicating to each other. Spurrier makes everything so physical in this script that despite the mystery – which Spurrier excitedly dishes out in heavy doses – we have a general sense of what’s going on, and a specific sense of what we want to know more about.

There’s a stunning versatility to Bergara’s page layouts. No one page looks anything like the others. Bergara tailor makes every image to match each story beat in the script. We get big panels that seem to stretch on forever that get interrupted by smaller panels of a character squinting their eyes or looking on in shock. Often, panels overlap one another in a chaotic jumble. The violence Bergara depicts feels disruptive to the tranquility he’s brought out on each page. You can feel the panic the characters are experiencing. And so much of this script works because of the style of Bergara’s art. His characters are so expressive and full of life. You barely notice that we don’t have the words to know what they’re thinking or saying, because you can read it on their faces so clearly. Even in the context of Bergara’s beautifully detailed scenes, his characters stand out dramatically. You’ll feel all the fear, happiness, sadness, and anger that’s painted across every face. 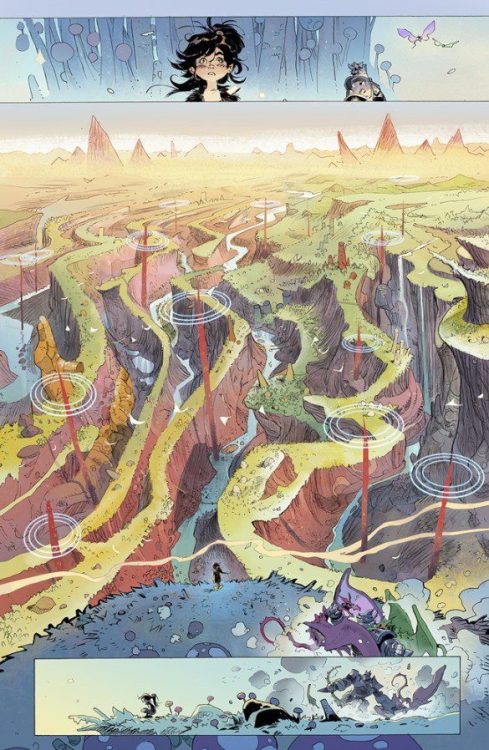 Thanks to Lopes, you will find yourself completely lost in every scene. The way Lopes colors each landscape makes every panel an immersive experience. In the first few pages, the stunning dark blues mix together with light grays to make you feel the intensity of the cold winter night. You can feel the difference in the red heat of someone’s anger and the terrifying yellow brilliance of a raging fire. Some settings are painted almost entirely in brown, letting the poverty of the civilization sink in as you see that nothing grows there, while others are covered in a playful pink. But every scene’s coloring fades away when Lopes has an emotion to show. The lush green of a scene disappears when a character feels fear, resulting in a mustard colored background. The same scene warms to a light red as his fear turns to fury. Lopes makes every landscape beautiful, but – more importantly – he makes sure that every emotional beat stands out distinctly.

STEP BY BLOODY STEP from Image Comics is gorgeous and moving. This creative team has done mountains of worldbuilding without uttering a single word. Frankly, it's the kind of storytelling you have to see to believe.Review: STEP BY BLOODY STEP #1 - A Picture's Worth a Thousand Words