Out this week, Dark Horse Comics’ STARSHIP DOWN #1 uses the familiar trope of scientists finding an ancient spaceship buried in the Arctic ice. Does this issue bring something new to the SciFi genre? Let’s find out.

Andrea Mutti is responsible for both the cover and internal art. Mutti’s cover painting is expertly crafted with color, texture, and technique. However, the painting lacks any interesting content that entices the reader to look further. The main character depicted on the cover looks bored with her surroundings. Mutti can do better with future covers by adding some action or an element of surprise.

Justin Giampaoli has created a standard setup issue where you meet a whole range of assorted scientific, military, and even religious officials. You can tell Giampaoli did his research when it comes to choosing authentic Russian names and using military lingo. In particular, the military and scientific jargon makes the story feel very authentic to the scenario as the setup is fleshed out.

On the downside, there are a few panels that are a little too jargon-heavy, which makes for a cumbersome read. Here’s a sample from a single word bubble on page 22:

“We’ll fire several standard dating vectors to make sure any anomalies will be out of your data path. When you’ve gotten past the stratigraphy and carbon-14 dating, proceed directly to mass spectrometry. Understood?”

That’s quite a mouthful.

Giampaoli’s story is a classic “ancient spacecraft found buried in the ice” brand of SciFi. Nothing Giampaoli has written here deviates much from that trope. We’re interested to see if future issues contain some original ideas, but there are none to be found in the first issue.

Vladimir Popov’s coloring is the highlight of this issue. Camouflage is not easy to render, but Popov does an excellent job coloring camouflage onto coats and making it look like it folds and creases in all the right spots. Popov has done excellent work here. 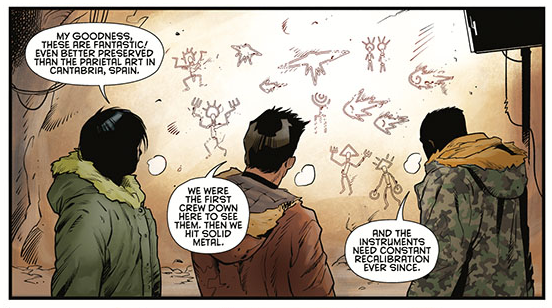 Despite the heavy amounts of jargon used, the lettering by Sal Cipriano keeps it all straight. This issue is very light on action and heavy on observation. The reader needs to see and process a lot of still imagery. Cipriano’s lettering keeps the conversations rolling and adds an element of pace to an otherwise static story.

Mutti’s artwork is like a collection of mini paintings. Mutti’s panels are well constructed, and her command of anatomy is strong. The weakest part of Mutti’s art is the faces. None of the characters has a distinctive face or features that make them memorable. This may partly be due to how quickly such a larger number of characters are introduced. You never really get a sense of distinction for each character, and the amorphous art for each character’s face makes it more challenging to connect with them.

For a story with a BIG reveal, the favorite page is the money shot, and this issue is no exception. Page 19 is a full length, single panel showing an (alien?) spaceship trapped in ice. The ship is advanced looking without being so alien that you can’t picture how it would fly. Mutti drew the ship well enough to make it look massive next to the scientists without losing a sense of scale. It’s an exercise in perfect perspective.

STARSHIP DOWN #1 uses a classic SciFi setup to begin its story. There’s potential if Giampaoli can introduce something fresh in the next issue, but not much to get excited about so far.

Review: STARSHIP DOWN #1 Questions Human OriginsOut this week, Dark Horse Comics' STARSHIP DOWN #1 uses the familiar trope of scientists finding an ancient spaceship buried in the Arctic ice. Does this issue bring something new to the SciFi genre? Let's find out. Cover Andrea Mutti is responsible for both the cover...