SPAWN #311, available in comic book stores on Wednesday, October 28th, takes readers on a thrilling hunt for Hellspawn. After breaking the timeline in a previous issue, a number of Hellspawn from the past found their way into the present. What’s more, undead warriors are running amuck. Can Al Simmons find a way to round up these beings? The issue answers this question in a way that leaves readers hungry for more.

This issue follows three distinct storylines while telling one main story throughout each. The focus? An unaccounted batch of Hellspawn and undead warriors who have gone missing. There are a number of potential players who might be at the root of it all, and Al is on the case. But could he be one of the targets? 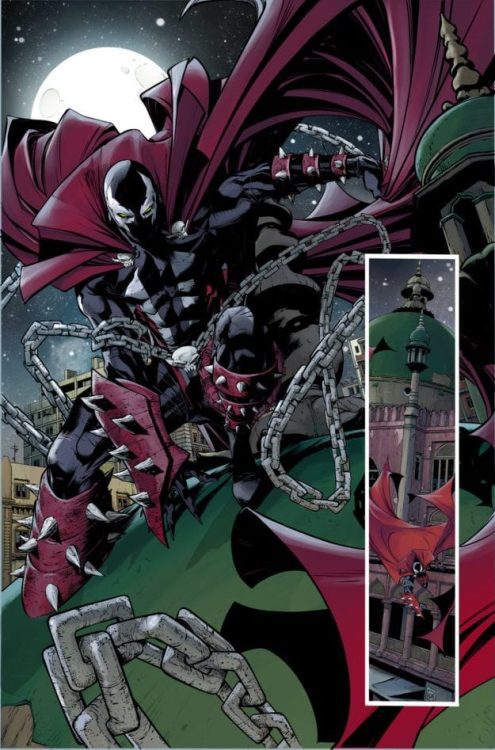 From a journalist’s mysterious death after interviewing a mayor to a vampire’s party, readers will find plenty of potential leads to the true culprit. But the most peculiar suspect is Jim Downing, a fellow Hellspawn Simmons thought he could finally trust. The resulting clash could either leave the two at odds, or create a team to take one whoever is behind the disappearances.

Todd McFarlane’s writing combines mystery, horror, and action in ways few creators can. In moments that make you hold your breath, the writer masterfully portrays protagonists who aren’t sure if they’re the hunters, or the hunted.

Carlo Barberi’s penciling and ink work, Peter Steigerwald’s coloring, and Tom Orzechowski’s lettering pulled us into the narrative in spectacular fashion. The transformation sequences of hero and foe alike are drawn with an otherworldly fluidity. They’re then fleshed out with dark shades that occasionally transition into lighter colors, luring readers into the panel to find out more. We also found the word balloon placements effective in the ways they framed each scene’s action.

SPAWN #311 is an engaging read that will keep readers on the edge of their seats. We are excited to see where the events of this issue take our heroes next.

Who do you think is behind all of the disappearances? Let us know in the comments below!