Writers Zac Thompson and Lonnie Nadler team up with artist John McCrea to deliver an opening issue for Yondu full of low-class and trashy characters in the dirtiest reaches of the galaxy – just as the old pirate deserves.

Yondu Udonta, the criminal voted most-likely-to-owe-you-money in the galaxy, has learned how to survive on his own. After being cast out of his Centaurian tribe at a young age, he’s learned how to fight, double-cross and steal his way to safety and a quick buck. On the verge of a serious payday, Yondu stumbles across one of the most valuable objects in the universe: The Herald’s Urn. In the process of trying to flip it for a pile of cash, the pirate learns that his Centaurian heritage may mean more to himself – and those of his tribe – than he could ever care to know. Also, he’s wanted for stealing fuel, a crime punishable by death. Such is life for everyone’s favorite Cetaurian lowlife. 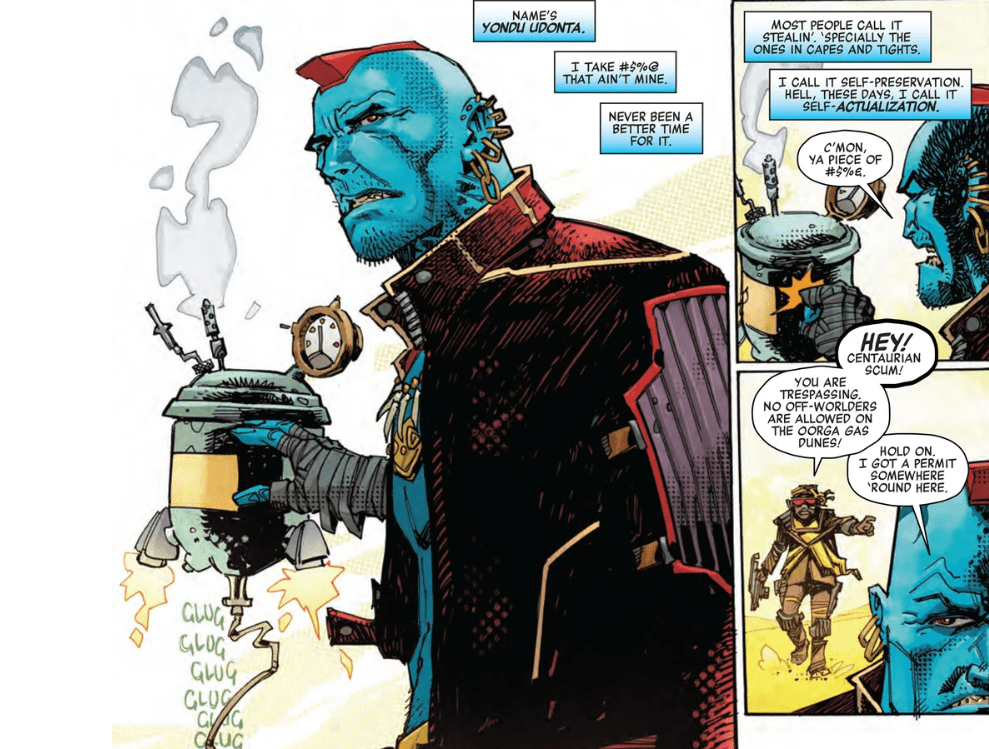 The script for “Yondu #1” penned by Zac Thompson and Lonnie Nadler is full of galactic slang and internal dialogue. Yondu’s own language is somewhat minimal due to him being such a loner. When he does speak, it’s typically to try and coax his way out of something. The slang terms that Thompson and Nadler use are fitting to both the character and feel of the book, and have echoes of DC’s “Lobo” character. This isn’t a criticism, as it obviously works. An interesting note about Yondu’s inner voice that comes up as narration is that his words come across as if he were a character trying to convince himself of how he lives. There’s a good deal of imagery that suggests that Yondu is clearly unhappy with how his life turned out, but his inner voice is constantly trying to convince both the reader and himself otherwise. There’s a neat shift from Yondu to another important supporting character and that character’s culture that is essentially the complete opposite of Yondu’s voice. Where Yondu is crude and insincere, this character is noble and direct with his regal dialogue. Without getting into spoilers, this character’s culture and voice bring an extra dimension to the writing and the story at large, and it will surely be one of the most interesting aspects of this series as it continues. 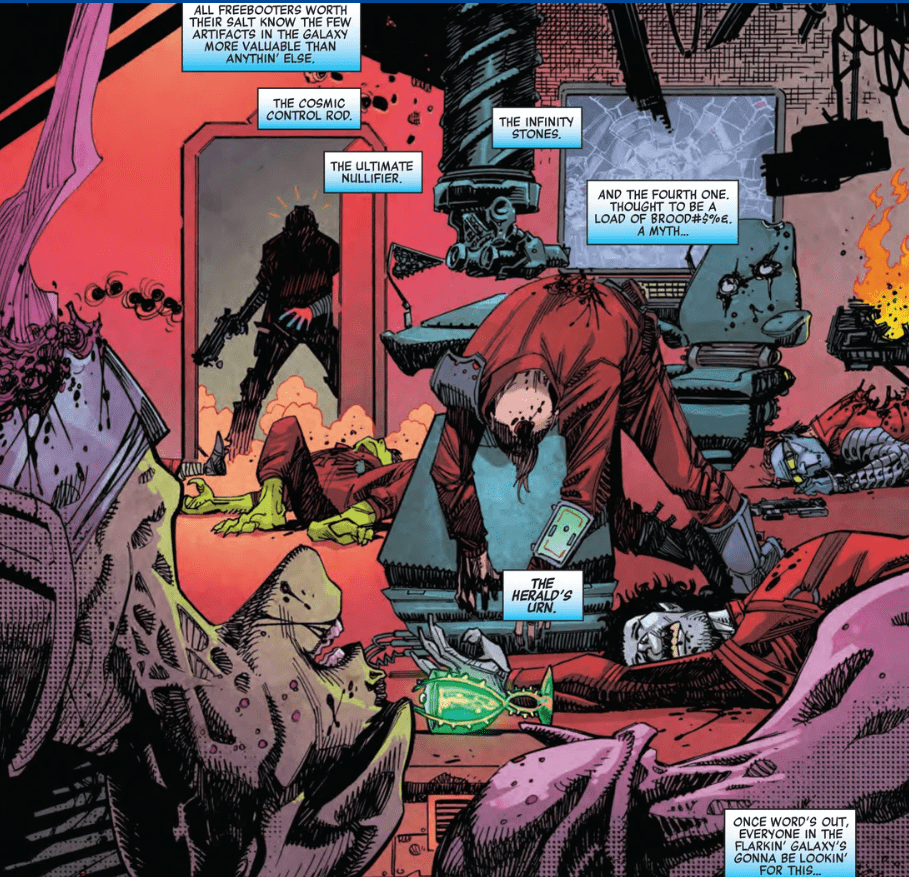 Few artists can create the kind of dirty and grimy illustrations necessary for a comic starring Yondu Udonta like John McCrea can. His work here consists of unattractive lowlifes and dusty backwaters that really sell the mood of what the story is shooting for. McCrea’s art doesn’t shoot as much for detailed character expression and emotion as much as it actually caricatures such aspects. Yondu’s expressions of irritation or disgust are made visible in an almost over-the-top manner, the same of which can be said for basically every character in the book. Enviornments are given an kind of polluted and gritty look that fits the sort of “used future” aesthetic this type of low-sci-fi earns. Much of this is due to McCrea’s use of heavy shadow and cross-hatching to create a consistently dark tone to his art. This is aided by Mike Spicer’s color work, whose wide array of colors are usually cast in a kind of shaded filter. It looks as if each panel were run through a cloud of charcoal dust before being printed. Again, none of this is an insult, as it works perfectly for the kind of comic being made here.

“Yondu #1” is the start of what’s sure to be a gnarly ride through the roughest reaches of the galaxy. Zac Thompson and Lonnie Nadler have written a fun and grimy issue that doesn’t require any knowledge of Marvel’s cosmic events, so it’s a good jumping on point for someone who doesn’t know much about this universe as a whole. John McCrea’s art perfectly captures the grungy atmosphere needed for this sort of book. Any fans of Yondu – whether from prior comics or his portrayal in the Marvel Cinematic Universe – can rest assured that this is a worthy pick from your local comic shop.

"Yondu #1" keeps it grimy and gives the titular character the exact kind of comic he deserves, while adding promise of a good time in the coming issues.Review: Space-Pirates Stay Sleazy in YONDU #1