Storytellers think a lot about dreams. It’s a natural obsession, since they often consist of snippets of information from our everyday lives, swirled about into something that almost-but-not-quite resembles a narrative. Connect a few dots and you can spin stories out of them. Maybe learn something about yourself. But then again, dreams can also be about falling off a building or getting an “F” on a test, so sometimes they can just be a plain nuisance. Image Comics’ Slumber #1, which is available now, stars Dream Detective Stetson. The character is best described as a kind of punch-clock nightmare exterminator. She’s not here to tell you why you dream the things you dream. She’ll just crawl inside your head and shoot the stuff that stresses you out. Sure, maybe it’s not the most romantic take on dreamscapes, but it gets the job done, doesn’t it?

An everyday police detective named Finch has been investigating the “Sleepwalker Killings,” a string of murders carried out by seven different killers in their sleep. Finch has a hunch that the killings might be connected to a different kind of detective: the aforementioned dream-diving Stetson. Meanwhile, Stetson is keeping busy at her dream-healing agency. But it quickly becomes clear that wading through the dreamscapes of strangers is more than just a job for her. She’s looking for someone. And that someone might just have their eyes on Detective Finch.

Tyler Burton Smith approaches Slumber #1 with a mix of weary sarcasm and growing dread. When the issue works best is when it draws out the main character’s sleep-deprived recklessness. Though some of the turns into wackier hijinks don’t land quite as well. The sudden swerves from serial-killer noir material to a buddy-cop comedy in a dream carnival are ambitious, at least. But it feels odd spending 2 pages on a joke about the main character explaining a poor lemons-into-lemonade analogy given all the threads this issue has to set up.

I’d be lying, though, if I said those threads didn’t pique my interest. There’s a lot being hinted at here, including a more supernatural twist on the classic “got into the detective business to hunt one man down” trope. Other aspects of the world are simply presented as-is in a way that could or could not be expanded upon later. I’m fairly certain we’ll learn why Stetson’s partner is a blue, supernatural creature eventually. But all the whys and hows behind her dream-traveling technology are ignored in a way I admire. Jump right into the story, and all the details will maybe get sorted out later. They’re not really the focus anyway. 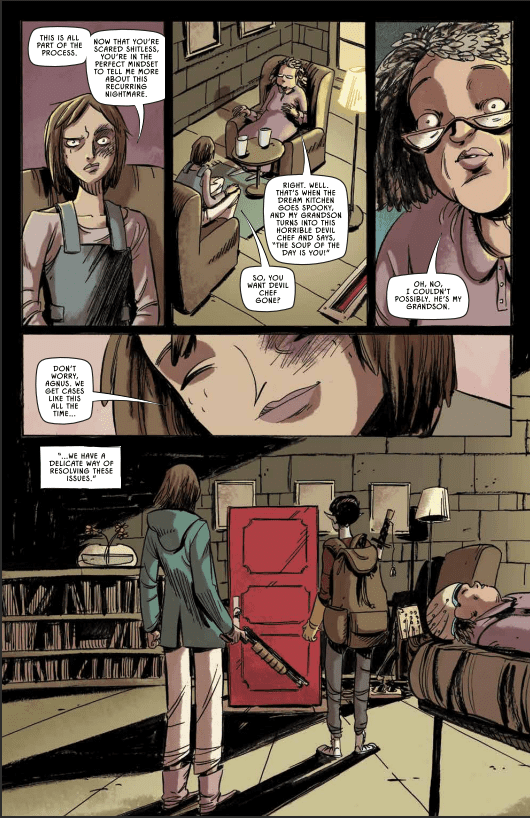 Vanessa Cardinali starts the issue with establishing shots of suburbs and cityscapes – all  harsh, inorganic grids contrasting her cartoony character work. So when it comes time for the characters to enter dreams, the world itself comes alive with the same sense of loose caricature. She’s clearly having fun drawing the strange creatures that populate dreams, having them clamber over one another until they move as a single mass of eyes and teeth. 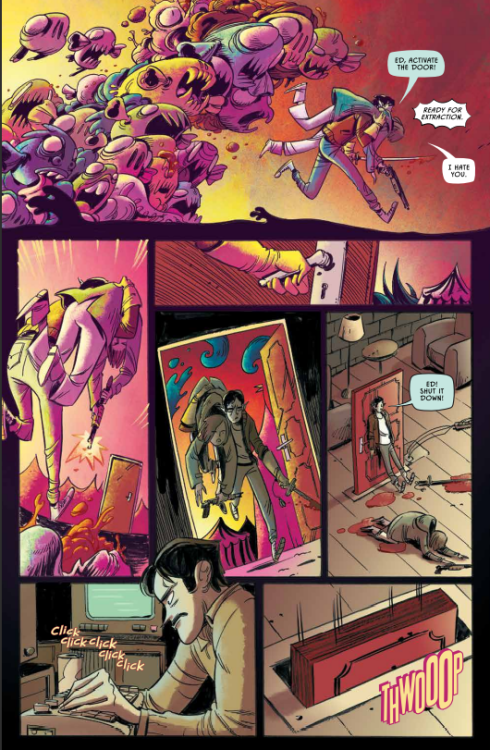 Simon Robins provides colors that add to the sickly unease of the world the comic presents. The real world tends to use a lot of dark browns and greens, while the colors of dreams are rendered in nauseating yellows and pinks. It keeps the whimsy often associated with dreams in an off-kilter register. These are, after all, the kinds of dreams that keep the characters from the sleep they desperately desire.

Steve Wands’ lettering work is also given a chance to show off in the unreality of dream logic. A Nightmare creature has the letters giving life to his screams practically fall out of his speech bubble. Another dream creature has their speech rendered in a thin, stark font, with a white font on a pink word balloon.

Slumber #1’s tone can stumble in the moment-to-moment, but still manages to paint a clear overall picture. It’s one of the most fundamental sources of childhood whimsy reduced to a gory, grueling day job. One where the main source of excitement is hoping you can find a runaway killer inside someone else’s head. Just make sure to follow all the 30+ rules, and file all the paperwork in the right places. Sign here, please.

SLUMBER's cast isn't here to ask what our dreams say about us. They're here to shoot the annoying bits and get a paycheck.Review: Sleepless in SLUMBER #1