Slaughterhouse-Five, a retelling of Kurt Vonnegut’s classic story as a graphic novel published by Archaia, is a fantastic read that takes advantage of storytelling that can only be found in comic books.

About the Book:
Vonnegut’s classic novel follows Billy Pilgrim, a man who has come unstuck in time. Due to this, Billy does not experience his life linearly and jumps back and forth between different moments. His time as a soldier in World War II, his career as an optometrist, and his time spent on the planet Tralfamadore could all be shown back-to-back, despite taking place years apart. Ryan North and Albert Monteys retell this story in a completely new way that makes it deeply enjoyable whether you have read Vonnegut’s novel before or not. 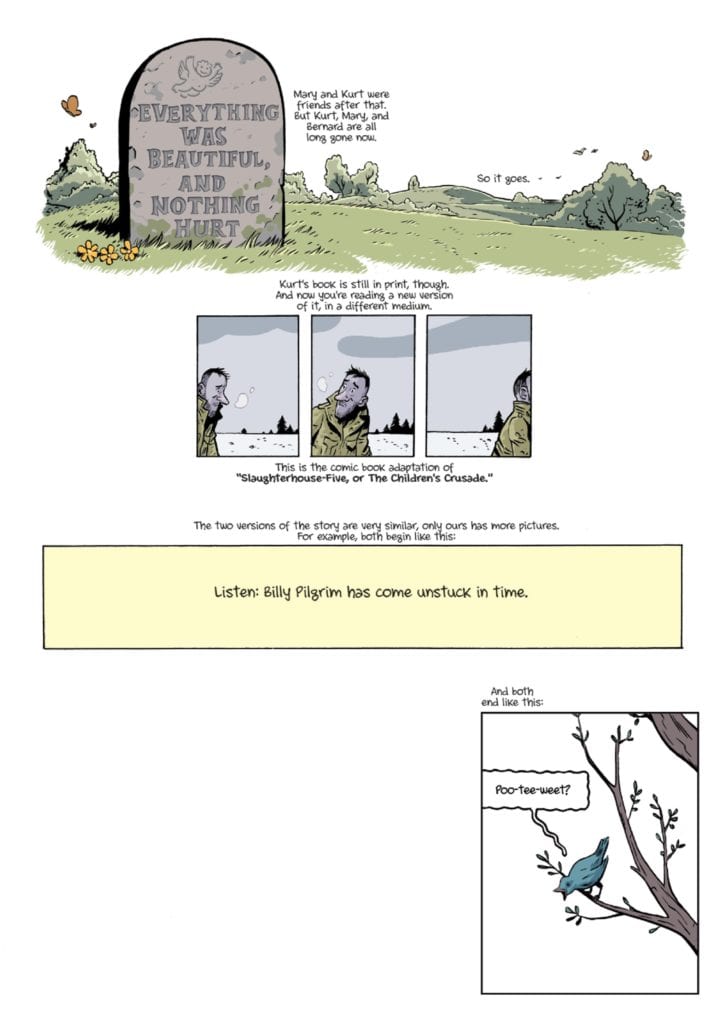 Vonnegut’s novel has rightfully earned its place as a classic, so the work of Ryan North is not to create a riveting story but to adapt it. In the graphic novel Slaughterhouse-Five, North knocks this task out of the park. Before we even get to the part of the story concerning Billy Pilgrim, North retells the section of the novel told by Vonnegut in the first person about how the novel will be set up. North changes this to third-person and speaks about Vonnegut’s experiences. This works well because it allows North to discuss how several parts of this story — mainly the parts about being a soldier in World War II — are based upon a true story. This also allows North to set up how the graphic novel will end in the same way the original novel ended: Poo-tee-weet?

One thing that North must be applauded on is his use of storytelling elements that are specific to the comic book medium. These make Slaughterhouse-Five so much more entertaining, and mirror the unconventional storytelling Vonnegut chose when he decided to tell such a nonlinear story with an omniscient narrator. Some panels layout the entire inventory of a character on a page, a timeline, a supporting cast list, and even a reoccurring technique that describes a character in three panels. Each instance brings new life to an old story, and could not be done nearly as well in any other medium. 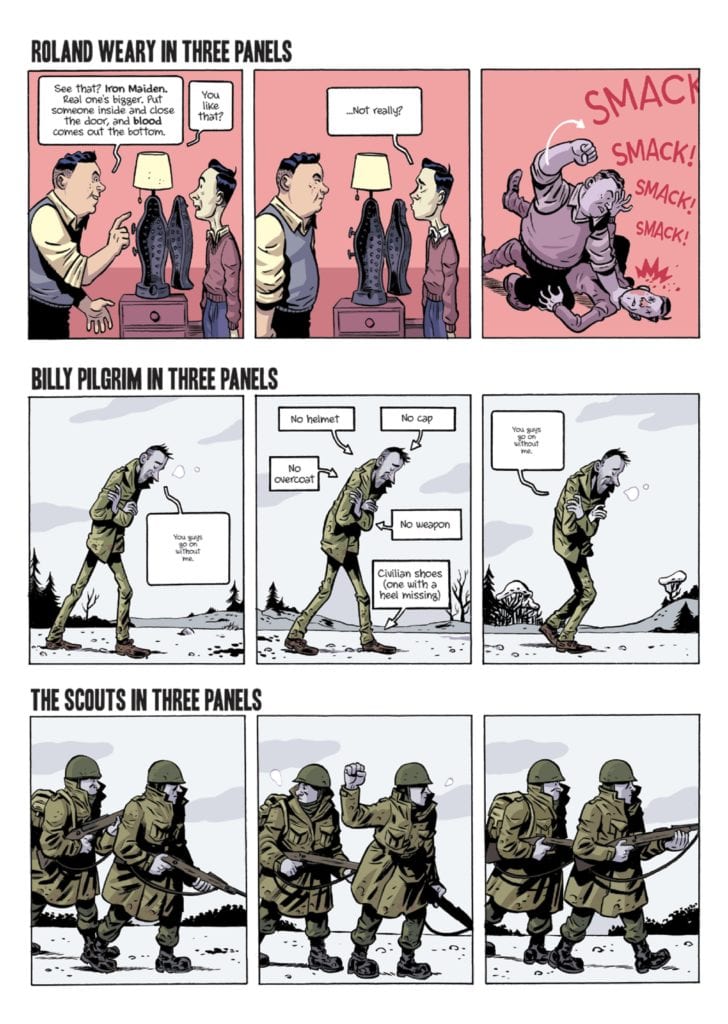 The art style of Albert Monteys is reminiscent of newspaper comic strips and feels much like a cartoon character. This style does two things for the story. One: it makes young characters seem very young, which helps drive the point that the soldiers who fought in the war were barely adults. This is why the novel is also called The Children’s Crusade, a Duty-dance with Death. The style also makes the death of characters less impactful, which goes along nicely with the phrase repeated in both the novel and graphic novel whenever someone dies: “so it goes.” When the way characters die become harsher, and they are humanized thoroughly before their demise, the continued accompaniment of “so it goes” is haunting. The framing of panels is clearly well thought out throughout Slaughterhouse-Five, and it is a great touch when Billy is in the same position before and after he travels through time.

The colors of Slaughterhouse-Five pair nicely with the line art and reflect the tone of scenes incredibly well. So much so that it is abundantly clear when Billy travels through time, When items from one time enter a panel set in a different time while Billy is transitioning, it is clear that those items don’t belong. The colors of Billy’s surroundings, while he is in Europe fighting in World War II, are very bleak, which helps highlight the harsh conditions. 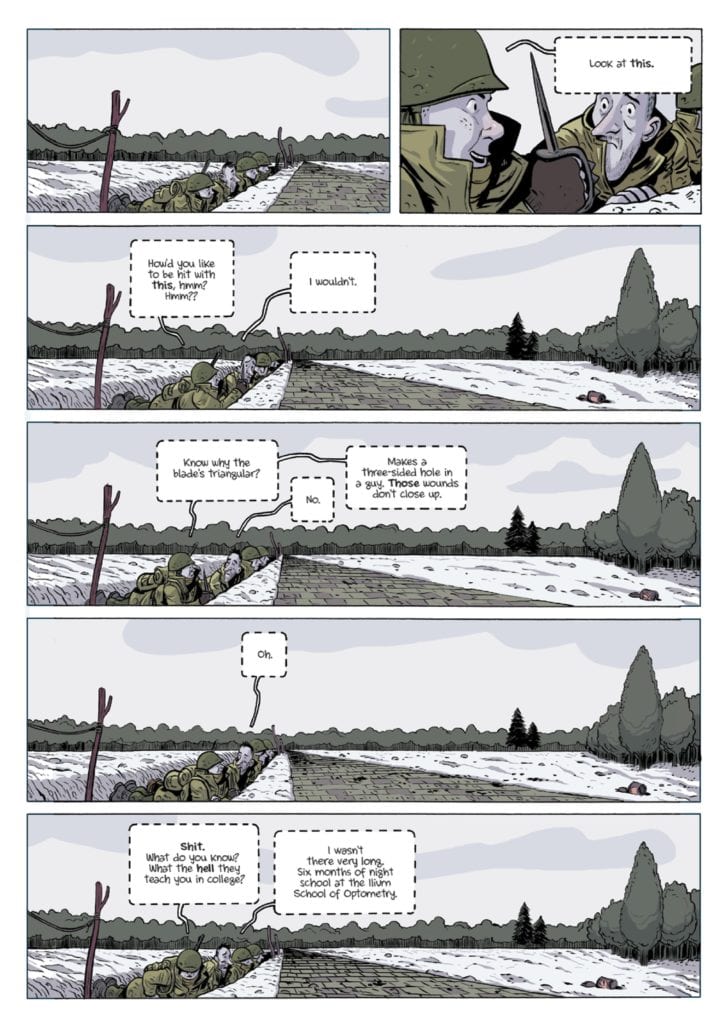 Slaughterhouse-Five has a standard black-and-white speech bubble whenever the narrator speaks, which helps set a non-emotive tone that pairs well with what he is saying. Monteys also uses lettering to add small sound effects in certain scenes, that helps effectively immerse the reader in what is happening.

This retelling of Slaughterhouse-Five is an absolute joy to read and is something I recommend to anyone who is a fan of Vonnegut’s classic tale. For those who haven’t read the original novel, the comic book adaptation is also a great place to start and is true to the original story. The story is a well-deserved classic, and this adaptation honors it while also introducing many unique storytelling elements specific to the medium.

Slaughterhouse Five is a phenomenal adaptation of a classic novel.Review: SLAUGHTERHOUSE-FIVE Is A Perfect Graphic Novel Adaptation