Review: SHE SAID DESTROY #1 Delivers Charm And An Interesting Premise

Looking for a new story that combines magic and mythology in a dramatic, space opera setting? She Said Destroy #1 may have you covered.

The new title from Vault Comics outlines an interplanetary conflict between the last remaining gods: Morrigan, the goddess of death, and her sister Brigid, who wants to destroy her and conquer the solar system. Morrigan’s followers won’t be defeated so easily, though, and they intend to fight back.

The work is a passion project for the two creators, as one can tell based on recent interviews with creators Joe Corallo and Liana Kangas. The book’s charm does come across on the page, manifesting in a complex world with an intricate mythology.

Corallo’s worldbuilding is the book’s strongest asset from the writing side. From the prologue on the first page of She Said Destroy #1, we get insight into the world’s defining attributes. We know that there were once thousands of gods. Now, though, there are only two left—Morrigan and Brigid—figures borrowed from ancient Irish mythology. We know also the goddesses’ worshippers are spread across the solar system, with Brigid’s followers having wiped out all the other deities and forcing their sun goddess on everyone. Beyond that, Corallo manages to competently weave enough exposition into the story to keep info dumps to a minimum.

Where the book comes up short is in clearly defining our protagonist. That role falls (presumably) to a girl named Winona, one of the witches who follows Morrigan. We’re told repeatedly that she’s special in some way and she has the favor of her goddess, but it’s not quite clear what that means, or why she’s favored. In that respect, She Said Destroy #1 falls guilty of riding the “chosen one” cliché.

The issue extends to other characters as well. We’re introduced to several, but get relatively little in the way of characterization or distinct personalities. Jackelyn feels like an interesting character, as does Morrigan, who serves as our narrator. However, the fact that we don’t know anything about most of the characters means we never feel the stakes are particularly high.

One can hope that, in subsequent issues, we’ll learn more about Winona and other central figures in the story. At present, there are few personas who command the reader’s interest and concern. 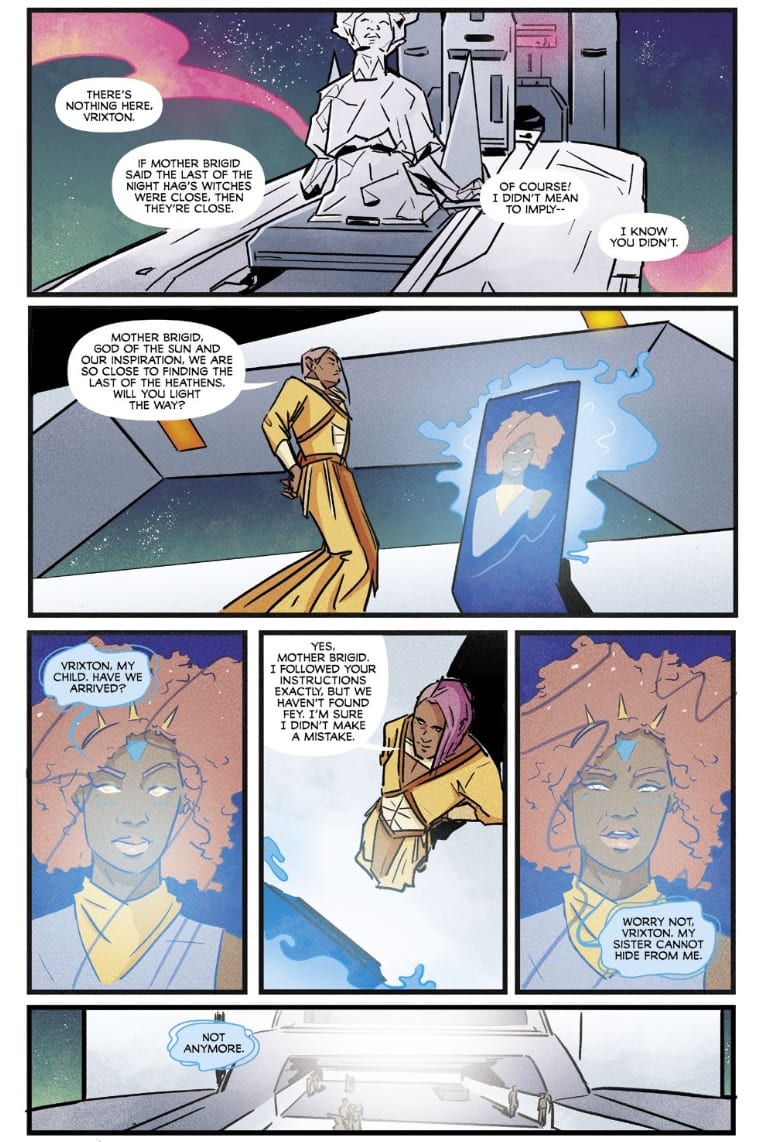 The linework by Liana Kangas in She Said Destroy #1 is easy on the eye. She employs a fairly minimal, somewhat scratchy style throughout the book. Most panels feature close-cropped illustrations of the characters with little background detail. Occasionally, though, the artist provides panels with wider, more landscape-style images to give us an impression of the world.

The lack of detail can make it hard to flollow the action on the page at key points. In a few panels, as a matter of fact, it’s hard to make out what we’re seeing at all. But for the most part, Kangas’s style works well enough.

The illustrations are dynamic, but they don’t always move fluidly from one panel to the next. Fortunately, colorist Rebecca Nalty helps provide flow to the artwork in She Said Destroy #1. While she employs just about every color imaginable, they’re similarly toned, making the work feel nice and cohesive.

She Said Destroy #1 has an interesting concept, and it definitely shows promise. The creative team will need to iron out some of those issues with characters, though, to make the most of this story.

Review: SHE SAID DESTROY #1 Delivers Charm And An Interesting PremiseSHE SAID DESTROY #1 lays out an intriguing world and concept for the narrative. However, the characters that populate it feel flat and uninteresting, with artwork that is good overall, yet inconsistent. If the creators can iron out those issues, they could have a masterwork on their hands. The first chapter, however, falls short of wowing readers.