From Image– Notorious kink writer TINA HORN teams up with artist MICHAEL DOWLING (Unfollow, Death Sentence) for SFSX, a social thriller about sex, love, and torture that reads like SEX CRIMINALS in Gilead crossed with Oceans 8—with a SUNSTONE twist! In a draconian America where sexuality is bureaucratized and policed, a group of queer sex workers keep the magic alive in an underground club called the Dirty Mind. Using their unique bondage skills, they resolve to infiltrate the mysterious government Pleasure Center, free their friends, and fight the power.

It’s very rare to find a piece of art, let alone a comic book that challenges and changes a reader. And not in the “I don’t agree with this new take on Whatever-Man arc” (and that’s not a dig on that type of story). Challenging means it’s such a unique experience that it’s making you question the story and your own preconceptions as you read it. Changing means you are different after finishing it. SFSX (Safe Sex) #1 does that and much, much more.

This book, right of the gate, let’s you know what its intentions are; it opens with a graphic group-sex scene. But Horn doesn’t write it as a mere shock. Using the main character’s Avery’s narration, the writer immediately grounds the kink, making it less about what the act actually is and to what that act actually means.  Avery is relatable in that her ultimate goal is true freedom and her ownership of her role in such a large setting shows you how strong of an individual she is. It’s great writing that creates the main character we can follow even in just about in any situation, no matter how graphic or how tender; this book even does both at once.

And what a world it is. It’s fucking scary. This is a totalitarian government hidden behind the facade of family groups and centers. One aiming to stamp out individuality.  The Party, the ruling agency, has control over everything; people can’t even fuck their spouses without logging it. It’s details like that, daring little details, that make this future being created so unique.

Horn is also building a great mystery though, and make no mistake this is also an engaging thriller (a genre also built on teasing and tantalizing). Whatever is happening with Avery’s husband George is a great hook. And it can’t be good. Nothing ever good resides on the thirteen floor of any building in any story (great detail again by Horn).

There’s a moment in SFSX (Safe Sex) #1 where Avery uses the term “glittery and gritty” to describe her world. That phrase can also be used to describe Michael Dowling’s remarkable art. This book is beautiful and seductive. It has delicate line work and the colors create a moody, sexy atmosphere that is both elegant, yet lurid. The figures, architecture and landscapes are also rendered on the realistic side giving it the grounding feel also present in the writing. It’s a great symbiosis that works so well, it almost seems effortless. 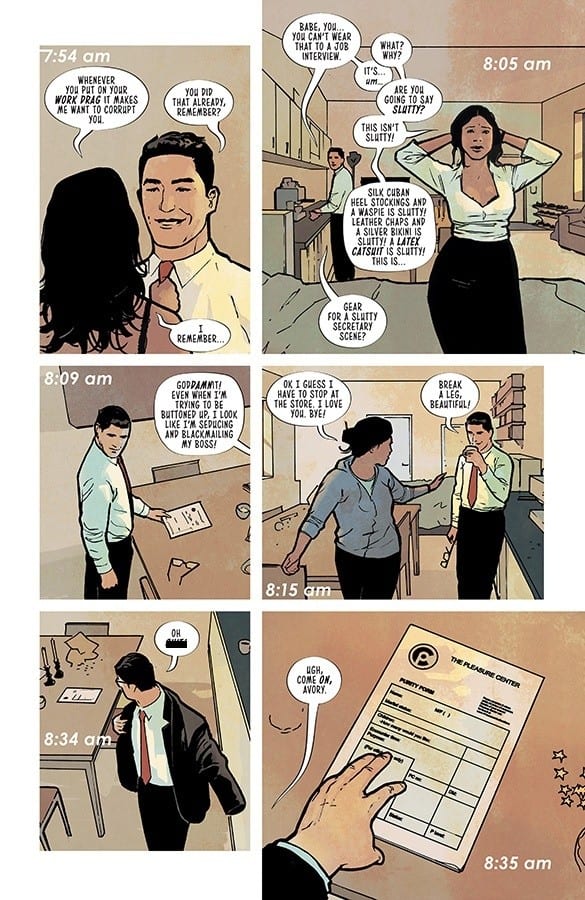 Steve Wands also does some remarkable work with lettering. He fills his pages with small touches like word balloons filled with fading letters to indicate someone talking under their breath. Avery’s narration is also rendered in purple. It being the only lettering not in black helps accentuate what she is saying and also her individuality. 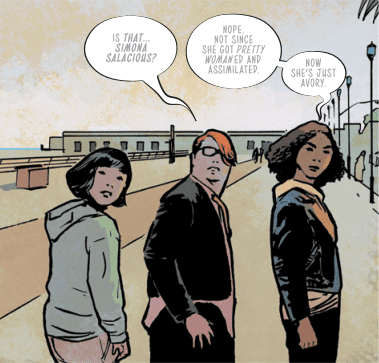 SFSX (Safe Sex #1) is without a doubt a must buy. It’s a book that grabs you and forces you to think. But it does so with a hell of a story, a great main character and a revolutionary attitude that is hopefully infectious. Grab it this book at your local comic book shop!